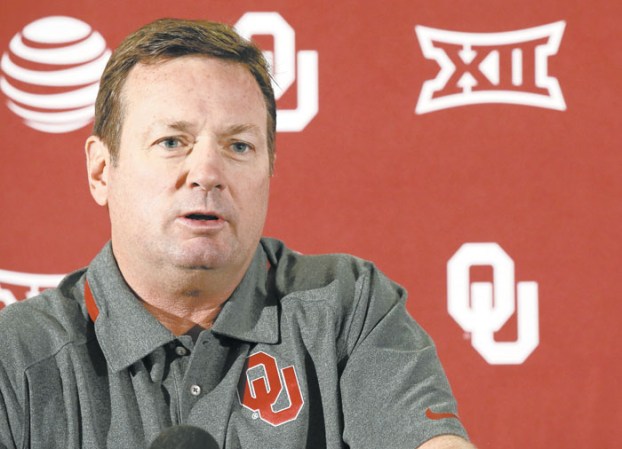 Oklahoma’s football coach abruptly announced his retirement Wednesday after leading the Sooners to 10 conference championships and a national title in 18 seasons.

The 56-year-old Stoops was the longest-tenured active coach in major college football, taking the job at Oklahoma a day before Kirk Ferentz started at Iowa. He went 190-48 (.798) at Oklahoma in his only college head-coaching job, giving him more victories than Sooners greats Barry Switzer (157) and Bud Wilkinson (145).

With his success and the school’s winning tradition came pressure. Many in the restless fan base were frustrated that the Sooners hadn’t won a national title since 2000, even though Stoops’ teams played for three more national titles during his tenure.

Stoops appreciated the run, and all that came with it.

“I’m not sad at all,” he said. “To everything, there is a season. It’s time, and that’s OK. I feel more grateful and appreciative and blessed that I had 18 1/2 years doing this with great people, great fan base, an incredible, legendary school, that I got this opportunity. It’s been a great ride. I’m happy about it. I’m more happy about that than I am sad that this day is here. It went fast.”

Stoops will stay on as a special assistant to the athletic director. Aside from that, he has an open mind about his future.

“I really don’t have a plan exactly what I’m going to do,” he said. “It’s a little bit frightening, but I’m really a spiritual person, and I believe until you open yourself up to something, you don’t know what the opportunities are that can come to you. So we’ll see what can flow my way.”

Stoops has heart disease, and his father, Ron, died in 1988 at age 54 of a heart attack suffered while coaching a high school game. Stoops said his health was not a factor in his decision, and reports that he was ill were false.

Offensive coordinator Lincoln Riley, 33, is getting a promotion, making him the youngest head coach in FBS. Just last month, Oklahoma gave Riley a three-year contract extension worth $1.3 million per year, making him one of the highest-paid coordinators in the country.

“The time is now because Lincoln Riley will provide a seamless transition as the new head coach, capitalizing on an excellent staff that is already in place and providing familiarity and confidence for our players,” Stoops said. “Now is simply the ideal time for me and our program to make this transition.”

Riley takes over a team that again will be among the favorites to win the Big 12 and reach the College Football Playoff, with a returning Heisman Trophy finalist in quarterback Baker Mayfield. His first game will be at home against UTEP on Sept. 2. His second game will be at Ohio State.

Stoops’ brother, Oklahoma defensive coordinator Mike Stoops, said Bob started talking to him about the move within the past two weeks.

“Tried to talk him out of it a little bit, but not too much. I didn’t want to push too far, he yells at me enough sometimes,” Mike Stoops said with a chuckle. “That wasn’t going to work. He was at peace, I could tell.”

Mayfield, like most people, was surprised. The move happened so quickly that Riley wasn’t able to get his parents to the media conference.

“Just taken aback, shocked,” Mayfield said. “Coach Stoops, when I was growing up, was always the face of Oklahoma football. To see him stepping down was a shock to all of us.”

Stoops was 39 when he left Florida, where he was defensive coordinator under Steve Spurrier, to take over at Oklahoma in 1999. The storied program had struggled for more than a decade to replace Switzer. Stoops quickly returned Oklahoma to national prominence, winning the 2000 national championship with a win over Florida State.

His early success that included three straight victories in major bowls and a five-game winning streak against Texas earned him the nickname “Big Game Bob.” Though Stoops later struggled to deliver the biggest wins, the program was as consistent a national power as any in the country during his tenure. Only four times in Stoops’ career did the Sooners win less than 10 games, and he never had a losing record.

Stoops won another Big 12 title in his final year, but the Sooners didn’t get to the College Football Playoff. His final game was a 35-19 win over Auburn in the Sugar Bowl on Jan. 2.

“Wish it could have been a little bigger, but happy it was a successful year,” Mayfield said. “I’ll always be grateful for the things he’s done for me. I’m happy that we got to send him out on a good note.”

Spurrier said the retirement was not a complete shock.

“There is life after coaching , and once he decided the time was right, he was going to move on,” Spurrier said. “He wanted to go out at the right time and he feels good about where the program is right now.”

“Bob truly represents what is good about college football and the success of his career speaks for itself,” Mark Stoops said. “What he means to me as a brother and a coach is immeasurable.”

Bob Stoops and his wife, Carol, have three children. A daughter attends Oklahoma and twin sons are seniors in high school who are potential major college football players.