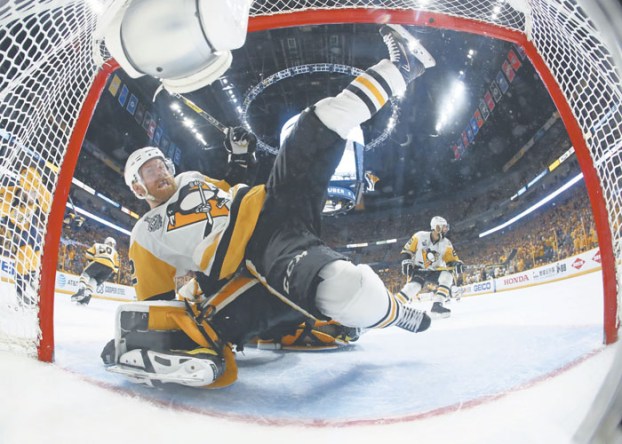 A series has broken out. Perhaps the seeds of an upset, too.

A week ago, the Nashville Predators headed home down 2-0 to the defending Stanley Cup champion Pittsburgh Penguins. Pekka Rinne’s game seemed to be in tatters and the Penguins fan base was musing whether it preferred a clean sweep or just a split of the two games in Nashville so the defending champions could raise the Cup on home ice.

The vibe inside PPG Paints Arena for Game 5 on Thursday night figures to be more anxious than anticipatory after the Predators evened the series at 2-2 with a pair of vintage performances on home ice that sent “Smashville” into a frenzy and delivered a very clear message that the first-timers are a clear threat to become first-time winners.

Through four games, Nashville has more goals, more shots on goal and a bit more swagger than Pittsburgh. What began as a two-month slog to the Cup is now a three-game dash, one that appears to be a coin flip. The Penguins have the experience. The Predators have the momentum. Both are fighting fatigue with adrenaline.

“I know people talk about how we’re tired, but believe me, they’re tired too,” Pittsburgh forward Evgeni Malkin said. “It’s not only us tired. It’s only three games left. We’re not talking about being tired.”

Maybe, but Nashville appeared a step quicker in its home building, pouring in nine goals and handing Penguins goalie Matt Murray the first back-to-back playoff losses of his young career. Pittsburgh coach Mike Sullivan isn’t concerned about Murray. He’s not really worried about the 190 feet in front of Murray, either. The Penguins have come within two games of the first team to capture consecutive Cups in nearly two decades due in large part to their resiliency.

And while captain Sidney Crosby says the “desperation level” will ramp up, Sullivan was quick to point out the term doesn’t mean what you think it means.

Pittsburgh is just 7-7 over its last 14 games and has been limited to just one goal in six of its past 11 — including the two losses in Nashville. Still, Pittsburgh is pretty good in the house that owner Mario Lemieux built. The Penguins finished with the second-best home record in the league and have ripped off five straight victories on home ice since Ottawa stunned them in Game 1 of the Eastern Conference finals, including the first two games of the Cup final when they needed just 36 shots to beat Rinne eight times.

Funny, Rinne hardly looked rattled back home, holding Pittsburgh to just two goals combined as Nashville rallied to tie things up in front of a giddy home crowd that included Underwood, who was so caught up in Cup fever she overlooked husband Mike Fisher’s 37th birthday. Not that Fisher or his teammates keeping track anyway. Not with the ultimate prize so close at hand.

When the playoffs started in mid-April, the Predators were the last team in. Now they’re two victories away from a title few saw coming. At least one of those wins will have to come in Pittsburgh, where Rinne has never won a game.

Maybe it’s fitting considering the 19-season journey they’ve taken to get to this point. They’ll take their chances.

“We have no home ice, we knew that coming in,” coach Peter Laviolette said. “We have to win a road game. There’s no other way around it.”

The Predators are 5-5 when forced to wear the road whites, including a Game 5 victory against Anaheim in the West finals. Save for a pair of flurries (one at the end of the first period in Game 1, the other at the beginning of the third period in Game 2) Nashville has been every bit Pittsburgh’s equal.

“I think we’re going to expect their best hockey in their rink,” Predators forward James Neal said. “I think both teams have gotten better throughout the series and that’s expected. It’s going to be a battle going in there and we need to steal one in their arena.”

Do it and they might not steal a title, but earn one.