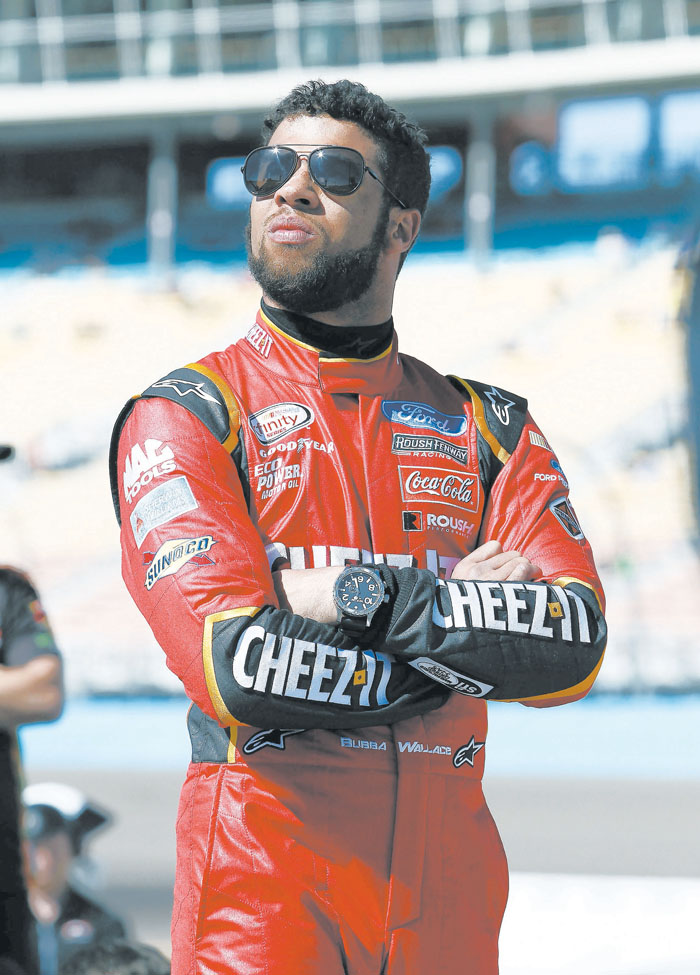 Darrell Wallace Jr. used to steel himself against racial insults spewed at him in the lower levels of racing and he survived sponsorship woes that slowed his advancement through NASCAR.

Wallace persevered in a sport that seemed long reserved for whites. This weekend at Pocono Raceway in Pennsylvania, he will take the wheel of the No. 43 Ford — the same number made famous by Hall of Famer Richard Petty — and make history as just the eighth black driver to race in NASCAR’s top Cup series.

The 23-year-old Wallace, the son of a white father and black mother, has been comfortable in his role as de facto trailblazer in a sport that took decades to fully open up to minorities and women.

“Everybody should deserve the same opportunity, the same challenge,” Wallace said.

Wallace, more commonly referred to by his nickname “Bubba,” got his shot when Aric Almirola was injured in a wreck at Kansas. Regan Smith served as substitute for two races. Wallace, who raced in the Xfinity Series for Jack Roush, has the ride until Almirola returns.

“This is the perfect opportunity,” Wallace said.

Wallace’s father sparked a love of the sport when Bubba was 9, putting him in go-karts, and always scouting the next series as his son grew up in Concord, North Carolina. Darrell Wallace even bought a Legends car from Mark Martin.

Wallace’s father owned an industrial cleaning business and pumped at least $1 million into his son’s fledgling career. He spent as much $250,000 in 2008. The elder Wallace paid bills late and borrowed money to keep his son’s career alive.

His family also told him to brush off heckles and hurtful words from his formative years in the sport — and do his talking in the car.

“I would get the gestures and everything thrown out,” Wallace said. “We’d show up the next weekend and win. That’s how I was taught. That’s how I was raised, to ignore the stupidity, continue on and do what I need to do.”

NASCAR says Wallace will join at least seven other black drivers in its 69-year history who reached the Cup level: Elias Bowie, Charlie Scott, Wendell Scott, George Wiltshire, Randy Bethea, Willy T. Ribbs and Bill Lester. Scott is the only one to win a Cup race, back on Dec. 1, 1963, and the next win at a NASCAR national event by a black driver came in 2013 when Wallace took the Truck Series checkered flag at Martinsville.

Wallace has heard from the black drivers before him. Lester has sent him encouraging tweets . Wallace talked with Scott’s son on the phone Monday night.

NASCAR has initiated several pushes toward boosting the number of minorities in the sport. There’s a “Drive for Diversity” program that has paid meager dividends with Wallace, and fellow Cup drivers Kyle Larson and Daniel Suarez all graduates of the development system. The program started in 2004 and was designed to attract minorities and women to the sport in all fields, from the track to the front office.

Wallace participated in a short-lived reality show in 2010 called “Changing Lanes” that featured 10 young female and minority racers competing for a spot on a developmental team.

He has become one of NASCAR’s hot social media stars, and his friendship with Ryan Blaney (who drives the No. 21 Ford for the Wood Brothers) has turned into more of a comic partnership that’s built them over a combined 100,000 Instagram followers. Wallace will voice Bubba Wheelhouse in the upcoming “Cars 3” movie.

“It’s funny, Blaney texted me this morning, actually woke me up this morning, he wants a picture this weekend,” Wallace said. “He was like, ‘We’re driving the two most iconic cars in the sport this weekend. We definitely have to capitalize on that.’”

Wallace has five years of experience in the Xfinity and Camping World Truck Series, and has five wins and 20 top-five finishes.  He’s 0 for 83 in Xfinity — one reason why he said he hadn’t yet made the jump to Cup.

“There’s not a day that goes by where I don’t think about that,” he said.

Wallace, who started driving for Joe Gibbs, has been on a persistent hunt for steady sponsorship since his Xfinity Series debut in 2012.  He raced in the series for Roush, but the team announced that he will transition from its Xfinity car to Richard Petty Motorsports. Without Wallace, Roush Fenway won’t run the No. 6 Xfinity team at Pocono. Almirola fractured a vertebra during the fiery wreck and is out indefinitely.

Will Wallace make a difference in ushering a new face of NASCAR?

The next generation of black golfers never followed Tiger Woods and Danica Patrick didn’t spark a rush of female drivers because the sports are so cash driven and opportunities are few. And for a sport that only asked fans in 2015 not to fly the Confederate flag, black fans have often felt uncomfortable at the track.

“The only flags that I see is green, white, the checkered,” Wallace said.

NASCAR and Ford surely wanted Wallace to get the chance to bolster diversity.

“I think everybody wanted to see this opportunity happen,” Wallace said. “NASCAR wanted to see it, I believe, for multiple reasons. Ford has been a great supporter of mine for the last two years, going on three years now. We’ve been able to make the most of it with those guys.”

Wallace certainly has the name for a NASCAR star. Darrell, Wallace, Junior. That’s a tripleheader of iconic NASCAR names with deep roots in the sport. One of his former race teams once came up with a slogan: “Darrell not Waltrip. Wallace not Rusty. Junior not Dale.”

“I could be their new favorite driver,” he said.