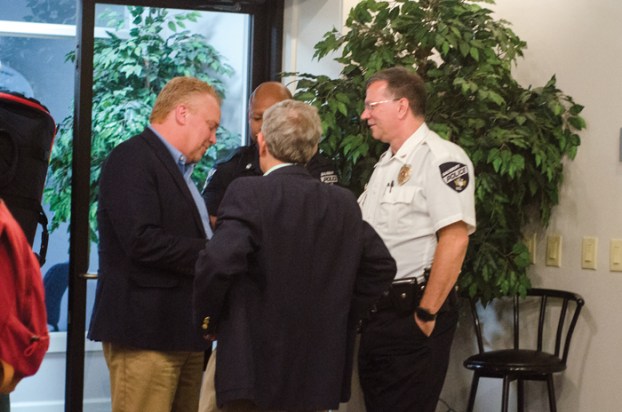 SALISBURY — Salisbury police Officer Karl Boehm has been cleared in the November shooting death of Ferguson Claude Laurent, according to a statement from Rowan District Attorney Brandy Cook.

Cook released a 172-page statement Wednesday that details the investigation; evidence collected at the scene and analyzed by the State Crime Lab; details of the autopsy report; legal analysis; interviews with witnesses and officers; and remarks to the community.

Cook said her office reviewed the investigation to determine “whether the conduct of Salisbury police Officer Boehm was unlawful.” The decision comes seven months after the Nov. 3 shooting.

Agents with the State Bureau of Investigation conducted the investigation.

Cook said based on the investigation, “all of the credible available, and believable evidence supports the conclusion” that Laurent was armed with a handgun and shot at Boehm. As a result of an immediate threat, Boehm returned fire that resulted in the death of Laurent.

She said a Jennings Bryco .380 caliber handgun, covered in blood, was found on the floor in Laurent’s bedroom in the area where he fell after being shot. The State Crime Lab determined that a .380 caliber bullet recovered from a wall in the middle bedroom of Laurent’s home was fired from that handgun.

“The evidence shows that the occupants inside the residence had notice that the police were entering the residence. The ‘no-knock’ search warrant did not affect our legal analysis in this investigation,” the statement said.

The statement and subsequent statements by witnesses and police officers either contain no name at all or a last name only.

SBI investigators spoke with a man identified as Mr. Petersen Jr., Laurent’s cousin, who had been staying at the mobile home for a month. Petersen said his two brothers also stayed at the home. Petersen heard voices from outside about 9 a.m. He looked out and saw police vehicles. Petersen said he heard loud booms or knocks on the back door and yells of “police” to let everyone in the home know who was at the door.

Petersen said in his statement he laid face down on the kitchen floor before police entered the home. He said he heard six to 10 gunshots. He told investigators he had never seen Laurent with a firearm and that he knew Laurent had had a recent break-in at the residence.

Before the Nov. 3 incident, police officers had conducted controlled buys of narcotics from occupants at 625 E. Lafayette St., Lot No. 1. A confidential informant had purchased drugs there and advised law enforcement that he observed firearms in the residence. The informant also indicated two of the occupants “were always armed.”

Cook said detectives had information that one of the occupants may have been involved in a shooting in Charlotte and was a possible suspect in a Salisbury robbery and breaking and entering. Another of the occupants had an outstanding warrant for his arrest on a charge of resisting a police officer con or about Jan. 22, 2016.

Cook said before going into the home, officers had a plan of action that included positioning themselves in predetermined locations in the area. Members of the Special Response Team, who were wearing green pants, green tops with patches that said “police,” body armor that said “police” on the front and back, headsets and helmets.

Detective Ginn said he and another detective parked their unmarked patrol cars in front of the home. Ginn said he saw someone open a window and throw out an object, which was later determined to be a Kel-Tec 9mm handgun. Detective Scrip said he saw someone from inside the house try to crawl through a window. He told the person to show his hands while another detective took him into custody. Other detectives recalled hearing the officers announce their presence prior to the shooting.

A no-knock search warrant does not require officers to immediately announce they are there to serve a warrant. Boehm said in his statement immediately after entering the house that he announced “police department, search warrant.”

Boehm said he saw Laurent moving toward the back corner of the bedroom at a rapid pace. The officer said he told Laurent several times: “police department, search warrant, get on the ground.” He said Laurent ignored his commands and pointed a firearm at him. He said he returned fire almost immediately after Laurent fired a shot.

In her report, Cook said a Special Response Team medic provided a statement on his role in the incident. The medic said he was assigned to use a halligan tool to breach the door. He used the tool on the back door while a detective hit the tool two to three times. Another detective threw a diversionary device (flash bang) into the mobile home. The medic held the back door and team members went inside.

Other members of the Special Response Team made statements that were exactly what Boehm and other witnesses described, including that officers announced themselves upon entering, Laurent fired first and Boehm returned fire.

Investigators found spent shell casings lodged in walls and in other places throughout the house including on a couch cushion and the floor. They found a plastic bag of a powder cocaine, several burnt marijuana roaches, rolling papers, $1,513 in cash a box of ammunition, and a Mossberg 12-gauge shotgun. Officials found what appeared to be a drug ledger, marijuana, digital scales, a bulletproof vest and drug paraphernalia.

The Post obtained autopsy results in January in which the medical examiner determined Laurent had 10 gunshot wounds: one in the head, five in the torso, two in the right upper arm, one in the right forearm, and one in the left wrist and forearm. Examiners recovered seven bullets. The examiner also noted Laurent had three bullets in his body from previous gunshot wounds, which were unrelated to this shooting. The three bullets were recovered from Laurent’s pelvis, right upper arm and left calf. Toxicology reports noted Laurent had no alcohol or drugs in his system.

Cook included what the law says about an officer using deadly force, saying it is justified if the officer reasonably believed he or another person was in imminent danger. A killing is justified under the law, she said, if it appears it is necessary to kill in order to save himself from death or great bodily harm.

She said it was clear that Boehm was the only officer who fired his weapon, the occupants had notice police were entering the residence, Laurent had a firearm and fired at the officer, and Boehm fired eight times.

“The number of shots was not excessive given the clear nature of the threat, the proximity of the parties, and the close confines of the bedroom,” Cook said in her statement.

Remarks to the community

“While it is the role of my office to objectively assess the totality of the evidence and circumstances when making a decision, we must not lose sight of the human side of any such incident. It is important to remember and respect the fact that Mr. Laurent Jr.’s family members are grieving the loss of a loved one, and that their lives have forever been affected by this event,” Cook said.

Before releasing the statement, the District Attorney’s Office reached out to Laurent’s family’s attorneys. Cook met with family members and discussed the SBI’s investigation as well as her decision in the matter.

“We must recognize that both our local community and our nation as a whole have become increasingly concerned about circumstances regarding officer-involved shootings,” Cook said.

Cook explained how her office must balance the public’s right to know with several factors including not identifying witnesses who may not want their home addresses, dates of birth and places of employment listed as well as including crime scene photos. She said quite often such photos are explicit and can be disturbing to the general public.

“We each must strive to genuinely listen to the ideas and concerns of all individuals, not just those of people with whom we happen to share similar mindsets. When we are all willing to carefully and earnestly consider the viewpoints of others, meaningful discussions can and will occur, and true progress can be made,” she said.

Cook added that it’s equally important to recognize the inherent challenges the job of being in law enforcement entails.

“Police officers frequently risk their lives or willingly put themselves in harm’s way, simply because they want our community to be safe,” she said.

“Our local law enforcement officers work long and late hours, spending a considerable amount of time away from their families, in an effort to make Rowan County a better place to live. We should all be thankful for their efforts and dedication to our community,” she said.

Cook said she welcomes being a part of any community dialogue about the criminal justice system.

By Mark Wineka mark.wineka@salisburypost.com SALISBURY — You could say this was a Grade A student service project. Twin brothers Drew and... read more