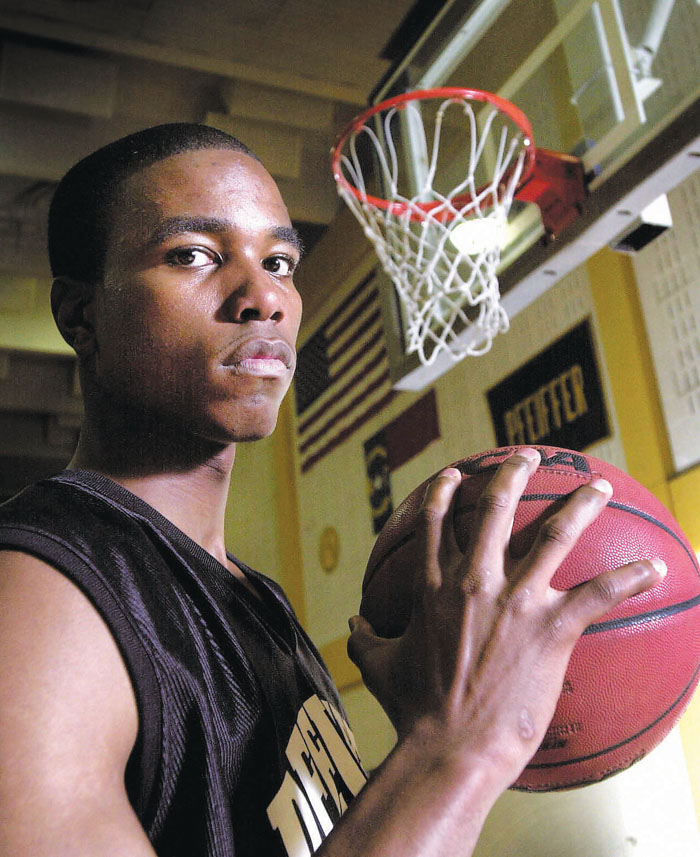 Jon C. Lakey/Salisbury Post file photo ... Damien Argrett, shown in 2004, during his playing days at Pfeiffer University. He was inducted into the Pfeiffer Sports Hall of Fame last December.

The scholarships were given in honor of Argrett’s mother, Joanne Holmes, and South teacher/coach John Davis. Davis coaches South’s girls basketball team now, but he was the varsity boys coach when Argrett came out of nowhere to shine for the Raiders in 2000.

The scholarships are the first phase in Argrett’s master plan to give back. A former basketball standout in Europe, he’s a member of the Pfeiffer University Sports Hall of Fame. He’s also an entrepreneur and the co-owner of two thriving businesses.

Argrett and former rival Levell Sanders own Euro Game Gear, an online enterprise that offers T-shirts and caps that combine “American flavor with a twist of European style.” Argrett and Sanders, who played college ball at Seton Hall, were opponents in the Czech Republic but developed a mutual respect that blossomed into a business partnership.

“I’ve had a pretty interesting life,” Argrett said. “Coming from where I came from, I wasn’t supposed to be able to the things I’ve been able to accomplish. But I was fortunate to have good people in my corner along the way. People like John Davis, and Dave Davis, my coach at Pfeiffer.”

Argrett’s life is so unusual — for one thing, there was a sudden, 10-inch growth spurt prior to his senior year of high school — that he started working on a documentary about his experiences more than two years ago. With help from Garvin Stewart Jr., the finished product will soon be released. The film is called “Catch Flight.”

“I’ve had people tell me for years that a movie about my life would be really cool,” Argrett said. “We’re going to have a private viewing of ‘Catch Flight’ on July 8 at the Statesville Country Club for family and friends. After that, we’re going to blast it out there on social media and let everyone know about it. The idea will be for people to stream it online for a small fee.  I hope to be able to give back some profits to South Rowan. There are a lot of people at that school who are responsible for me being where I am.”

Argrett said the documentary will start when he’s 13 years old and moving with his family from New York to North Carolina. He enrolled at Corriher-Lipe Middle School. Then he was just a kid who loved basketball. He was 5-foot-10 as a junior and didn’t stand out, even in his P.E. class.

“And John Davis cut me from the basketball team,” Argrett said with a laugh. “He swears he didn’t, but now it’s on film, so everyone can see it.”

As a senior for the Raiders, Argrett became virtually unstoppable, even against mostly 4A competition.  He averaged 15.4 points per game. In a non-conference game against Northwest Cabarrus, he scored 40 points (that’s tied for the school record) and pulled down 22 rebounds.

Argrett blossomed so late in high school that he had no scholarship offers. Davis took him for tryouts to Division II schools such as Catawba and Pfeiffer.

Argrett wasn’t sharp in his Pfeiffer workout, but head coach Dave Davis (now at Newberry) and assistant Rob Perron (now Catawba’s head coach) were convinced Argrett had potential. There was no scholarship money at first, just a place to call home and a chance to improve.

Homesickness almost won out over basketball as Argrett redshirted during the 2000-01 season.

“But I was able to turn around the homesickness,” said Argrett, who was the most outgoing guy on campus by his senior season.

Argrett was second team all-conference as a junior and made his first plane flight when Pfeiffer traveled to California to play in the Elite Eight.
During his senior year, he shot 60 percent from the field while scoring 20.1 points per game. He was all-conference first team and MVP of the Carolinas-Virginia Athletic Conference Tournament, a league that would become Conference Carolinas. He was voted to All-America teams.

For his career, Argrett scored 1,545 career points for the Falcons (11th all-time), while shooting 61.7 percent from the field. He pulled down 680 rebounds, which also ranks 11th in Pfeiffer history.

“Dave Davis taped everything on VHS,” Argrett said. “There was a lot of digging through crates to find footage of my Pfeiffer days. The technology we have now makes things a lot easier.”

There was more homesickness when Argrett left the states to compete in Europe, but eventually he won that battle, too.

He played five years overseas. There were stops in England, Luxembourg, Germany, Poland and Finland.  He was an all-star in Romania and he was league MVP in the Czech National Basketball League in 2007, shooting 65.7 percent from the floor and averaging 20.2 points and 7.4 rebounds.

When the economy faltered, and his once-lucrative European job offers diminished, Argrett decided to return home and start over as a coach and trainer. He’s been tremendously successful.

Argrett didn’t reveal where  the “Catch Flight” documentary would end, but a good candidate for the climactic scene will be Argrett’s induction into the Pfeiffer Sports Hall of Fame last Dec. 2.

“To have my plaque placed next to the plaques that I used to look at when I played at Pfeiffer, what an amazing feeling that was,” Argrett said.  “I’ve gotten a lot of help from a lot of people. Now, I just want to do my part when it comes to giving something back.”