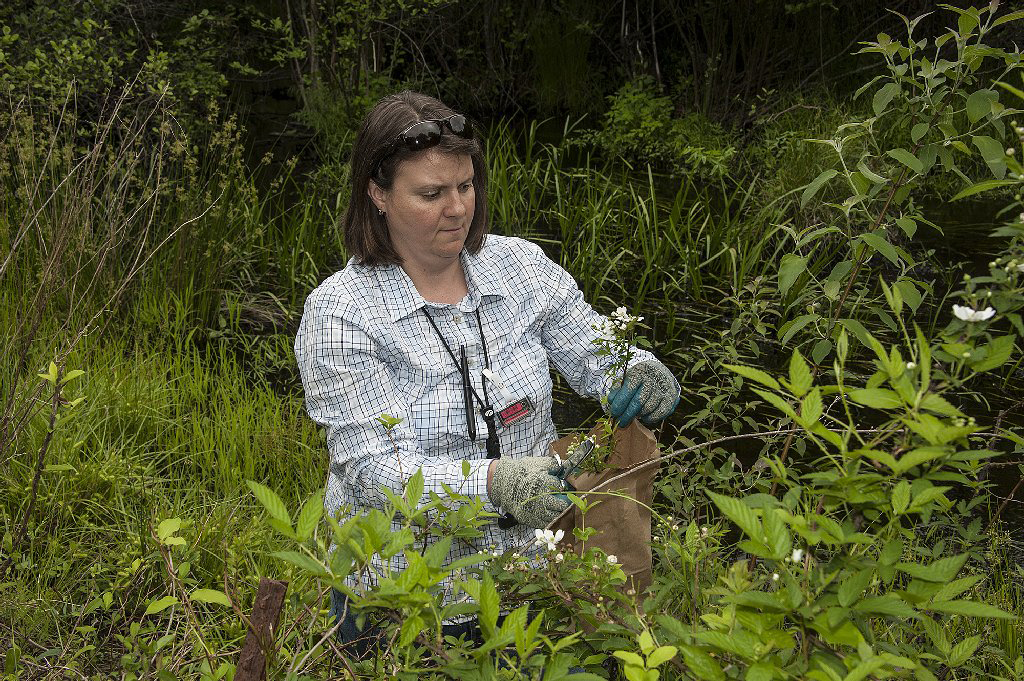 Dr. Wendy Kuhne, a 1994 Catawba graduate, at work in the Savannah River National Laboratory in South Carolina, where she works as a radioecologist. Submitted photo

AIKEN, S.C. — Wendy Kuhne says you can tell a lot about the health and state of a forest by the diversity and number of woodpeckers living there. She should know: This radioecologist has spent her career assessing the health of environmental habitats in and around nuclear sites.

Since 2009, Kuhne has worked at the Department of Energy’s Savannah River National Laboratory, located just south of Aiken, South Carolina, on the Savannah River Site.

Today, the site is the DOE’s environmental management laboratory, with a primary focus on environmental stewardship and restoration. As a principal scientist, Kuhne shares that she was “literally” hired because of her diverse education and research background. Much of today’s research is focused on generating ideas, instruments and methods to help clean up legacy waste remaining across the complex.

“The Savannah River Site is a unique site where you have multiple generations of family members who have and currently work here. There are many stories of co-workers talking about their grandpas and grandmas who worked here during the Cold War. Their mission was to build the reactors and produce material to help protect our country. For me, my mission is, I’m completing what they started. … As they were operating, there were some releases to the site — seepage basins and burial grounds for the waste, and some of it leaked out. Now, it’s our job to look at those areas and assess what is the best way to clean it up or immobilize it. And we must ask: ‘What are the risks to the public, the workers, and the environment?’”

Kuhne’s Ph.D. from Colorado State University is in radiological health science and her specialty area is radioecology.

“I look at the fate and the transport of the radionuclides. I ask, ‘Where did it go?’ ‘How quickly did it get there?’ and ‘What are the pathways and risks to humans and non-human biota?’”

The fact that the laboratory is remote is just one of the distinctions about the place where Kuhne works. Much of the site is not developed and remains as natural habitat undisturbed by man. In many of these locations you can find an abundance of wildlife. You get a chance to see animals undisturbed by humans. Occasionally, though, as she is doing environmental monitoring at the site, she will pass remnants of concrete curbing in the woods or an old structure, an odd and distinct reminder that there were once people living there.

What concerns Kuhne now is the decrease in the number of faculty across the country who are knowledgeable about radioecology. She and her colleagues are considering who will train the next generation of radiation professionals. Today, the National Center for Radioecology, an initiative created at the site, has established memoranda of understanding at various universities to sustain and grow this important specialty science.

Being at the Savannah River site for a little over seven years, Kuhne said, “I’m still learning seeing new opportunities within my current career. The National Laboratories offer a lot of opportunities for collaborations and there’s more to learn about the various program areas.”

Her advice to those who aspire to follow in her “lucky” footsteps is simple: “Keep working hard. You don’t have to be valedictorian of your class to be successful. You just have to keep working and out work everybody else,” she said.