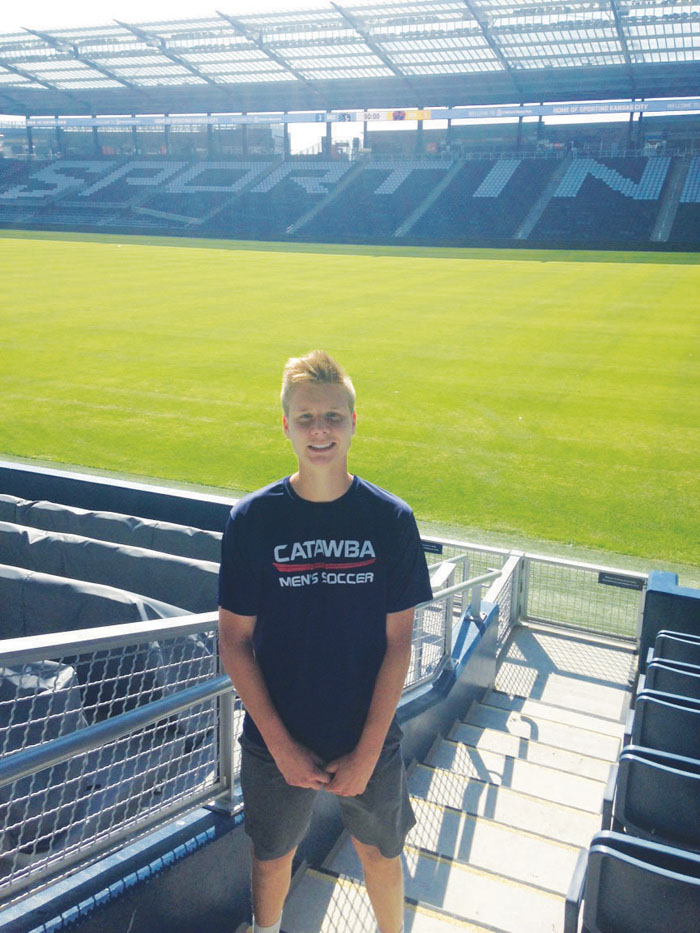 Submitted photo ... Local high school student Eric Turnbull will spend his junior year in Kansas City, Mo., after accepting enrollment in the acclaimed Sporting KC's Soccer Youth Development Academy. Turnbull, a goalkeeper, will live with a host family and go to high school there. He is shown in Sporting KC's stadium during a recent visit.

It’s ringing bells and shouting his name with a unique offer, one rarely afforded to rising young goalkeepers.

“I know,” the Carson High School sophomore said during a recent workout behind Catawba’s Frock Field. “Not everyone gets this chance.”

Turnbull has spent the past school year honing his skills for the NC Fusion youth soccer team, part of an Under-18 club program based in Greensboro. He’s improved his footwork and anticipation skills, mastered distribution of the ball, steeled himself mentally and spent countless, after-school and evening hours perfecting his craft.

“It’s essentially a feeder program for the MLS (Major League Soccer) team,” said Craig Turnbull, Eric’s father and Catawba’s Associate Director of Athletics. “Opportunities like this don’t come across very often, so he’s got to take the chance. Eric is motivated, passionate and loves to train. It’s about as high as you can go without being on a Youth National team. You’re in high school, you’re doing your thing, but you’re devoting yourself to soccer.”

Eric will leave his China Grove home in late July or early August and take up residence with a host family near Sporting/KC’s Swope Soccer Village practice facility. He’ll attend a public high school and train four or five nights a week, then participate in weekend matches.

“I’m excited because I’ll be playing at a really high level,” he said. “I’ve always been focused on being the best I can be — and one of my dreams is to make the pros. This is another step forward.”

It is, but let’s take a step backward. You may remember Turnbull as Carson’s backup keeper in the fall of 2015, when the Cougars went 20-2 and rode starter Grayson Owens’ steadying performance three rounds into the 3A state playoffs.

“I got to watch,” Turnbull recalled. “But that helped build my character, watching from the sideline all season. I learned that you’re not always going to be the No. 1 guy.”

With only marginal help from his father — Catawba’s men’s coach for 11 seasons beginning in 1998 — Turnbull went looking for playing time. He joined the Fusion program last autumn and manned the cage in 15 or 16 matches this past season.

“I wanted a tougher challenge,” he indicated. “I’m not like everyone else, following the same path. I actually like being different.”

Being different helped Turnbull distinguish himself during a showcase event last December in Florida. A tape was forwarded to Sporting/KC Academy goaltenders’ coach Gavin McInerney, who invited him for a five-day trial over Easter break in April.

“They were looking for a new keeper because the one they had was moving up a level,” Turnbull explained. “(McInerney) liked my shot-stopping ability and how I knew when to come off my line for a long ball. He liked my size (6-2, 170 pounds) and understanding of the game.”

“He called and said, ‘The spot is yours if you want it,'” he said. “I was just trying to take it all in. It’s sort of a crazy experience, but I realized this is the real thing, the pro experience.”

Now comes another challenge. Turnbull’s family has given its blessing, but insists he maintain the 4.0 academic grade-point-average he’s established. “He understands,” said his father. “If the grades slip at all, he’s coming back, no matter what happens on the field.”

For now, it’s a one-year undertaking. Turnbull and his family will re-examine their situation next June and make an appropriate decision.

“If I’m still showing them what they want to see, they’ll probably bring me back for my senior year,” he noted. “It would be the same Academy program, just their U19 team.”

Turnbull has already drawn luke-warm interest via email from a number of Division I college programs in the southeastern part of the country. That likely will expand following a year in the Midwest.

“I hope it all leads to something,” he said. “I want to play in college somewhere. After that Sporting/KC has something called a home-grown contract, where they’d get first dibs on me after college.”

Tempting, indeed, but since 2010, only four players from Sporting/KC’s academic program have reached the professional team. That hasn’t soured his enthusiasm.

“They’re very high on Eric,” said Craig Turnbull. “They like his size, his agility, his athletic make-up. And they reached out to him. That’s what I’m proudest of.”

“I want to go all out and make it the best experience of my life,” he said. “From there, we’ll just see what happens.”