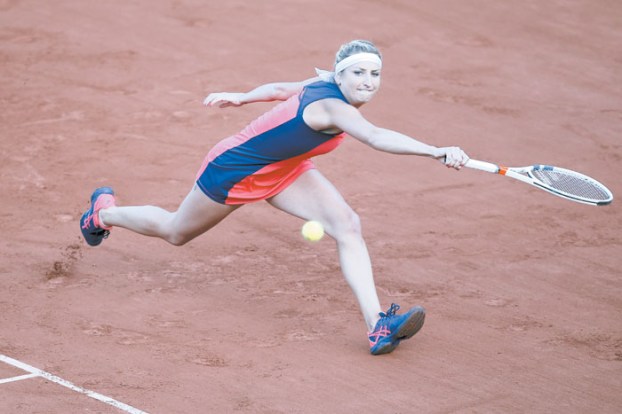 Timea Bacsinszky of Switzerland returns the ball to France's Kristina Mladenovic during their quarterfinal match of the French Open tennis tournament at the Roland Garros stadium, Tuesday, June 6, 2017 in Paris. (AP Photo/Michel Euler)

PARIS (AP) — Sometimes, nerves get the better of Timea Bacsinszky. The good thing is it happens off the tennis court.

It was all the more impressive considering she hardly slept the night before.

Bacsinszky was having a nightmare. She dreamed she had to leave her hotel room and play in another tournament. But at the last minute she realized had forgotten crucial things — presents for her family.

“I remember that I had, like, three towels that I wanted to give to my siblings because I have three,” she said. “But I forgot them in the closet. So it was a big drama, so I could not get into the plane without giving the towels of the French Open, and I woke up and I was sweating. It was terrible for me.”

Bacsinszky thought about giving up tennis earlier in her career because of a foot and abdominal injury. She played her first semifinal in Paris two years ago, losing to eventual champion Serena Williams. Bacsinszky was up a set and a break in the second against Williams before she crumbled and eventually lost 4-6, 6-3, 6-0.

“Serena hasn’t taken part in this tournament, so this will help me quite a lot,” Bacsinszky said.

Her opponent for a place in the final will be 19-year-old Jelena Ostapenko, who beat former No. 1 Caroline Wozniacki 4-6, 6-2, 6-2. They play Thursday, which happens to be Ostapenko’s 20th birthday and Bacsinszky’s 28th.

“She’s feisty. I’m no longer feisty. I’m eight years older than her, even though at the French Open I’m in a fighting mood,” Bacsinszky said. “I know it won’t be a bed of roses.”