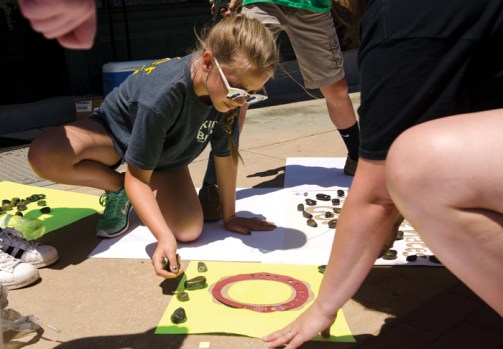 KRISTI CRAVEN/ SALISBURY POST 5th Grader Abby DeGroat places rocks on a stencil of the 'City of Salisbury' seal to get it ready to be painted on June 3, 2017 in Downtown Salisbury. 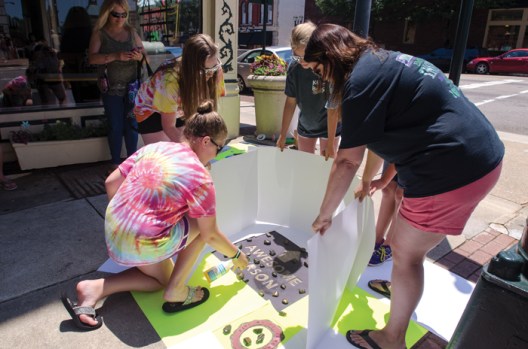 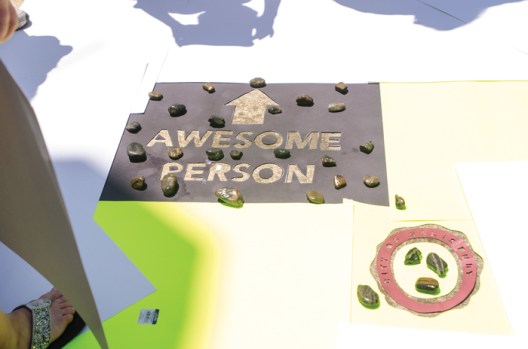 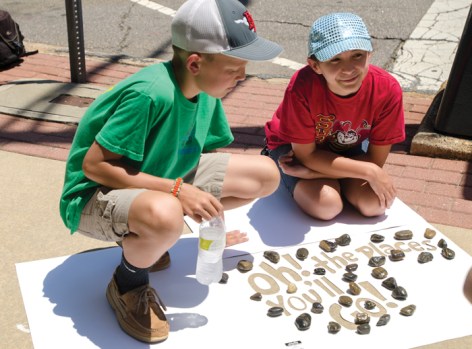 KRISTI CRAVEN/ SALISBURY POST Fifth- graders Isaac Cawley, left, and Kennedy Watts- Hofner, both 11, put rocks on a Dr. Seuss stencil to keep it in place while they paint on the sidewalk in Downtown Salisbury on June 3, 2017. The paint will only show up if it gets wet and should last 2-4 months.

Fifth-grade students from Shive Elementary School had one mission on Saturday: To make people smile.

As a collaboration between the Public Art Committee of Rowan County and Shive Elementary, the students created sidewalk art that is a little bit different: You can see the art only in the rain.

The students used a spray “paint” that can be seen only when wet. They crafted stencils and practiced on concrete at their school before coming to downtown Salisbury to create their art on the Square.

“The kids had been practicing, and knew exactly what they needed to do to create their art,” said Jane Creech, a member of the Public Art Committee. “Each student knew what their job was.”

The students placed their stencils on the sidewalk, held them down with rocks, then sprayed them with the special solution. When the solution dried, they sprayed once more before removing the stencils.

The sidewalk art should last for three to four months.

The artwork shows several quotes that are on each of the four corners of the Square meant to make people smile in the rain when they look down. One is a popular Dr. Seuss quote, “Oh, the places you’ll go!” Another reads, “You are my sunshine.”

The fifth-graders were assisted by their art teacher, Amy Parsons, as well as Jason Harwood, a music teacher at Shive Elementary. The idea originated with Parsons, who asked the Public Art Committee if it would partner with the school on this project. Two members of the Public Art Committee, Creech and Barbara Perry, were both present when the students created their art Saturday.

“The goal of the students is to bring smiles to people on a rainy day,” Creech said, “and I think that they will accomplish that goal.”

The artwork can be seen on each corner of the Square in downtown Salisbury — but only in the rain.