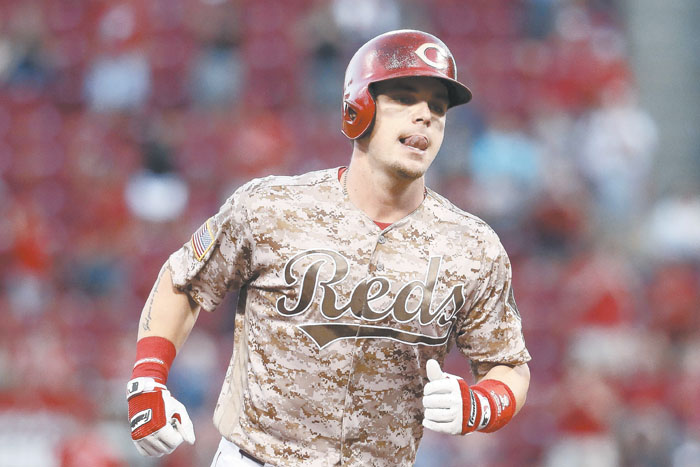 CINCINNATI (AP) — Cleats, pants, jersey, hat. Scooter Gennett peeled off his uniform — the one still dripping from a douse of celebratory ice water — and handed every piece to a clubhouse manager. All of them were headed to Cooperstown.

All so hard to believe.

The diminutive Cincinnati native put on the greatest home run show in franchise history Tuesday night. He tied a major league record with four homers — becoming the 17th player to accomplish the feat — and matched the club mark by driving in 10 runs during a 13-1 victory over the slumping St. Louis Cardinals.

Kluszewski. Robinson. Bench. Perez. Junior. None of them ever hit four in a game.

“It’s surreal, man. It really is,” Gennett said, wearing a backup set of clothes after the others were whisked away. “I’m truly blessed. I’m from here, born here. Watching all those guys play when I was little. And to do something that’s never been done — I can’t put words on it.”

He wasn’t the only one nearly speechless. No major leaguer had ever had five hits, four homers and 10 RBIs in a game, according to the Elias Sports Bureau. Gennett’s 17 total bases also were a team record.

“He had a career night, a great night,” said Adam Wainwright, who gave up Gennett’s second career grand slam. “Guys do that now and then. He almost beat us by himself tonight.”

Gennett was the most unlikely player on the roster to turn into an historic slugger.

The 5-foot-10, 185-pound infielder was claimed off waivers from Milwaukee late in spring training for a utility role. Some seasons, he barely hit four homers at all — he reached double digits only once and had 38 in his career heading into the game.

Josh Hamilton was the previous player to hit four home runs in one game, for Texas against Baltimore in May 2012. The last National League hitter to do it was Shawn Green for the Los Angeles Dodgers against Milwaukee in 2002.

The 27-year-old Gennett singled his first time up and then homered in four straight at-bats . He joined the Cardinals’ Mark Whiten as the only players with a grand slam among four homers in a game, according to Elias. Whiten did it in 1993 at the Reds’ old riverfront ballpark, driving in 12 runs that stand as the major league record.

“It’s amazing, especially since he’s not an everyday player for us,” manager Bryan Price said. “He’s got power, but four homers in one game? I don’t know what to tell you.

“It’s very emotional. It was an honor to witness that.”

Gennett snapped an 0-for-19 slump during the Reds’ 4-2 win over the Cardinals on Monday. He went 5 for 5 on Tuesday and raised his batting average 32 points to .302.

Gennett got his big night started with an RBI single off Wainwright (6-4), who brought a long scoreless streak into the game but couldn’t handle a team that has hit him like no other. He lasted only 3 2/3 innings and gave up nine runs for just the third time in his career.

The last time? Also against Cincinnati in 2013.

Gennett’s grand slam in his next at-bat was the first Wainwright had allowed since 2012. Gennett then connected for a solo shot and a two-run homer off John Gant.

With the crowd of 18,620 on its feet, Gennett hit a two-run drive in the eighth off John Brebbia for a place in history and his second curtain call.

“I was kind of laughing, to be honest with you,” Gennett said. “For a guy like me to do that is crazy — a little short of a miracle.”

KANSAS CITY, Mo. (AP) — Mike Moustakas hit a two-run homer with two outs in the ninth inning after Kansas City rallied from a six-run deficit, and the Royals snapped the Houston Astros’ 11-game winning streak with a 9-7 victory Tuesday night.

Moustakas drove an 0-1 pitch from Ken Giles (1-2) out to right with Salvador Perez aboard. Moustakas had four hits and three RBIs.

Kansas City trailed 7-1 in the fourth inning but completed its comeback with a four-run eighth. Whit Merrifield hit a three-run double with two outs in the inning to tie it at 7.

Merrifield drove a 1-2 offering from Giles to left field, scoring Moustakas, Cheslor Cuthbert and Alex Gordon. Merrifield has hit safely in 20 of his last 21 games. Giles blew his second save in 18 opportunities.

The Astros’ winning streak was the longest in the majors this season. They dropped to a major league-best 42-17 this season.

Mike Minor (3-1) pitched a scoreless inning for the Royals.

The Red Sox made their first visit of the season to Yankee Stadium, and the matchup between the longtime rivals and top teams in the AL East had the feel of October, mostly because of the raw weather — low 50s, windy and damp.

Overpowering closer Craig Kimbrel struck out five in 1 1/3 innings to seal the win. He fanned one batter on a wild pitch, and struck out big-hitting rookie Aaron Judge on a 99 mph fastball to finish it.

BALTIMORE (AP) — With a power-laden lineup that thrives on the long ball, the Baltimore Orioles are built to come back from almost any deficit.

That ability was displayed amply against the Pittsburgh Pirates, who had a seemingly secure lead before being victimized by Baltimore’s firepower Tuesday night.

Jonathan Schoop tied it in the ninth inning with his second homer of the game and Mark Trumbo singled home a run in the 10th to rally the Orioles to a 6-5 victory.

ARLINGTON, Texas (AP) — Joey Gallo hit a towering two-run homer that put the Texas Rangers ahead to stay, and they ended a four-game losing streak with a 10-8 victory over the New York Mets on Tuesday night.

Nomar Mazara had four hits and also homered for the Rangers.

After Gallo hit a high-arcing shot in the third, he stopped running between first and second base with teammate Adrian Beltre just ahead of him. It initially appeared that Jay Bruce might have caught the ball, but it was actually just beyond the reach of the right fielder’s outstretched glove. Gallo’s 17th homer put Texas up 5-4.

Asdrubal Cabrera and Neil Walker went deep in the third for the Mets. In between those shots, Bruce was robbed of a homer when Jared Hoying made a leaping catch just above the 8-foot wall in straightaway center.

Nola tried to convince manager Pete Mackanin to leave him in the game for the ninth. That goal for a complete game will have to wait.

Nola allowed a run over eight innings, Odubel Herrera doubled in the go-ahead run in the sixth and Philadelphia survived a ninth-inning scare to beat the Atlanta Braves 3-1 on Tuesday night.

“It was great to see somebody go eight innings,” Mackanin said. “He begged me to go out in the ninth.”

The Phillies have won four straight and are 5-0 against the Braves this season, including a three-game sweep at Philadelphia on April 21-23.

Howie Kendrick had three hits, including a homer in the fourth.

Cesar Hernandez led off the sixth with a double to left off Jaime Garcia (2-4) and scored on Herrera’s double to the right field corner for a 2-1 lead.

Herrera moved to third on Kendrick’s single to right and scored on Garcia’s balk with Tommy Joseph at the plate.

Earlier in the day, Phillies Hall of Fame third baseman Mike Schmidt drew criticism for saying in an interview on 94 WIP-FM that Herrera’s language barrier prevents him from being a player the Phillies can build their team around. Schmidt later clarified his remarks in a statement.

“All I said was the language barrier he has now would make it difficult to be a team leader,” Schmidt told The Associated Press. “In the future when he learns to communicate better, he can be anything he wants.”

The 25-year-old Herrera speaks to reporters through an interpreter and isn’t as comfortable doing interviews as some of his Spanish-speaking teammates. Freddy Galvis, a fellow Venezuelan, is the team’s clubhouse leader.

Garcia allowed three runs and eight hits in 7 2/3 innings. The left-hander retired 11 consecutive batters to open the game before Kendrick’s two-out homer in the fourth tied it at 1. Kendrick’s homer, only his second, landed about three rows deep in the left-center seats.

The Braves scored a first-inning run when Brandon Phillips doubled and scored on a single to left field by Nick Markakis. Kendrick’s throw from left field was up the first-base line, preventing a possible play at the plate.

Braves IF Sean Rodriguez took ground balls in the outfield before batting practice in his first return to baseball activities since offseason shoulder surgery. Rodriguez had been considered a longshot to return this season.

Mackanin said he was not ready to announce Neshek would take the closer’s role from Neris. Mackanin said Neris is struggling with his splitter. “It doesn’t have the same action he had last year and we’ve got to figure that out,” he said.

The Braves placed struggling right-hander Bartolo Colon on the 10-day disabled list with a strain in his left side. The team recalled right-hander Jason Hursh from Double-A Mississippi. Hursh pitched a scoreless ninth inning.

Herrera’s last nine hits have been for extra bases. He was 1 for 4, ending his streak of three straight games with two doubles, including two straight with two doubles and a homer. He has 19 doubles. He began the night one double behind Colorado’s Nolan Arenado for the most in the majors.

Phillies: Eickhoff (0-6) will look for his first win of the season in Wednesday night’s game. Eickhoff is 0-2 with a 7.07 ERA in his last three starts.

Braves: RHP Mike Foltynewicz is 2-1 with a 4.68 ERA in five career games, including four starts, against the Phillies. He allowed one run in seven innings and did not receive a decision in Atlanta’s 5-2 loss at Philadelphia on April 23.