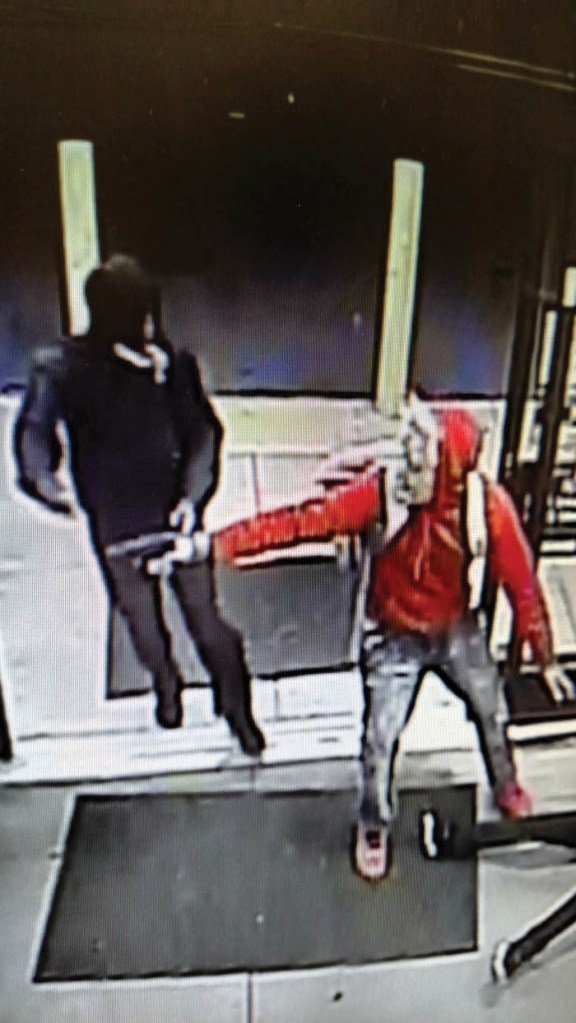 Rowan authorities are looking for these two men who they say robbed the Dollar General store at U.S. 601 late Tuesday night. The masked men were armed with handguns and took money from a cash register, a safe and back office. A clerk was injured when she fell against a rack upon the suspects entering the store. Submitted photo

SALISBURY — Rowan County authorities say they are looking for two masked men who robbed the Dollar General store on U.S. 601 at gunpoint late Tuesday night. A clerk was injured when she fell in the incident.

The robbery occurred at 10:08 p.m. at the store, 5150 U.S. 601. Rowan deputies answered a call about a robbery in progress, but the men were gone by the time they arrived. The manager called 911 to report the robbery and gave a description.

Two black men with black semi-automatic handguns approached a clerk who was bringing merchandise inside the store at the door. The woman was confronted by the men, both of whom had their faces covered. One suspect pushed the woman back inside, and she fell onto a rack and to the ground. The suspect grabbed her by the arm and led her to a cash register, said Capt. John Sifford.

One suspect told the clerk to give him all the money. The clerk was also forced to open the safe behind the register and remove the money inside. A suspect put the money in a backpack. The second suspect made the manager walk to a back office, where the manager handed a box to the suspect.

The suspect ran through the store toward the front door, followed by the second man, and both ran toward Cauble Road.

One suspect was wearing a red hooded sweatshirt, a character mask with long gray hair attached, faded blue acid wash jeans, red tennis shoes with black laces. He was carrying a mint green backpack with a blue liner. The man was described as being light-skinned.

The second suspect wore a black hooded sweatshirt pulled tight over his head. The sweatshirt had wide white stripes from the armpit to the waist. He wore black Adidas exercise pants that had four narrow white stripes down the side. He had on a black face mask that covered the lower part of his face. The sweatshirt had a white drawstring. He wore oversized shoes, possibly sandals or flip-flops, with black socks. The gun the man was carrying was black, but had a silver ejection point.

Authorities called a dog in to track the area, which led to the roadside at the entrance of Old Wood Lane, off Cauble Road.

The track stopped as if the men had gotten into a vehicle, Sifford said.

A man who lived nearby said he saw the two men before the robbery and thought their behavior outside the store was suspicious. He said they were sneaking around the building.

The clerk was taken to Novant Health Rowan Medical Center with unknown injuries.

Anyone with information is asked to contact Salisbury-Rowan CrimeStoppers at 866-639-5245 or online at tips.salisburyrowancrimestoppers.org.