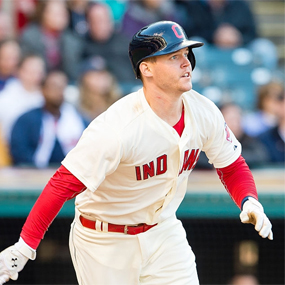 AP file photo ... Jerry Sands, shown playing for the Cleveland Indians during a game in 2015. Sands, one of the best players in Catawba College baseball history, has seen major league action for the Dodgers, Indians, Rays and White Sox. He is currently in Richmond, the Double A affiliate of the San Francisco Giants.

Sands, who launched a school-record 61 homers and knocked in 205 runs in three seasons for the Indians, will turn 30 in September. The Los Angeles Dodgers’ minor league player of the year in 2010, he made a transition from hot prospect to journeyman status several years ago. Now he’s a guy with a wife and two sons who is fighting for his baseball life.

“I came to the realization in the offseason that this could be my last baseball season,” Sands said in a phone interview. “I was thinking that if I didn’t have a really good year that it might be time to move on, that I might be done, and when you start thinking like that you do start putting some pressure on yourself.”

Sands has been a fine player at the highest levels of the minor leagues, belting 159 homers, driving in 536 runs and batting .273 for various MLB organizations. He’s also played in 156 big league games for the Dodgers, Tampa Bay Rays, Cleveland Indians and Chicago White Sox with less scintillating results — 10 homers, 57 RBIs and a .238 batting average.

The wide disparity in those stats resulted in Sands being stereotyped as a “4A player,” a guy who can mash in Triple-A, but can’t quite cut it in the majors. That label has been hard to shake, although Sands has kept right on swinging, waiting for a break, hoping to be in the right place at the right time.

Jettisoned by the White Sox after spending most of the 2016 season with the Triple-A Charlotte Knights, the 6-foot-4, 225-pound right-handed hitter became a free agent last October, able to sign with any team that wanted him. But no MLB team did.

On Feb. 13, Sands, whose growing family includes wife, Morgan,  3-year-old Eli and 7-month-old Tucker, signed with the Somerset Patriots of the Atlantic League.

The Atlantic League is an independent league, which means its teams aren’t affiliated with big league clubs. There are youngsters who were drafted but failed and were released after their first attempts to succeed in the minor leagues. There also are veterans, seeking that second, third or fourth chance, hoping to impress a scout. Some guys do get signed by MLB organizations, but it’s a long-shot league, a last-chance league.

Somerset, a small town in New Jersey about an hour south of New York City, proved a great fit for Sands. Management and fans loved him. He struggled at the plate for about a week, but then he started to mash like he was back in Catawba pinstripes. Balls started flying off the walls on a regular basis, and it was a fun time for Sands. He got his mojo back.

“The competition in the Atlantic League was very good and the pitching was surprisingly good, some hard throwers but also some smart, veteran pitchers,” Sands said. “You had to be on your game to hit in that league, but then I got comfortable and started to figure some things out. Then I got really hot.”
Somerset was playing in Pennsylvania against the Lancaster Barnstormers on May 30 when Sands belted two homers. The next night, he left the yard two more times.

On June 1, Sands was batting .319 with 14 doubles in 39 games and leading the Atlantic League in homers (13) and RBIs (45). That’s when he got a offer from the San Francisco Giants. They wanted to buy his contract from Somerset.

“It was a little bit of a surprise with the Giants, but everything in this game seems to happen suddenly,” Sands said. “They’ve had a lot of injuries in their organization, and it’s a good opportunity for me. I just felt like if I passed this up, it might be one of those things I regretted. So, I just jumped in.”

The Giants assigned Sands to their Double-A team, the Richmond Flying Squirrels, instead of their Triple-A club, the Sacramento River Cats, but Sands was fine with that.

“Richmond is just two hours or so from home,” Sands said. “They wanted me to get consistent at-bats every night, and those at-bats were available in Richmond. I’m back in affiliated baseball. Now it’s up to me.”

Sands is excited to be back with a National League organization for the first time since 2013 when he was a Pittsburgh Pirates farmhand. In the National League, where there is no DH, a lot more pinch-hitters are employed and double-switches are commonplace. Benches are more of a factor than in the A.L. Sands can play left field, right field and first base. His versatility could be useful off the San Francisco bench.

For a guy who can swing the bat, the Giants are the ideal organization to be joining because the whole organization is struggling mightily. All the Giants’ farm teams, including Richmond, are losing. The big league team has dealt with a gaping hole offensively in left field since April, and Sands is a candidate to fill it. The team recently released Justin Ruggiano, who failed to take charge of the job. The team also recently sent down third baseman Christian Arroyo, which means that Edwin Nunez, who has been used a lot in left field, is now back at third base.

Mike Morse, who owned the role of backup, right-handed hitting first baseman and pinch-hitter, suffered a concussion in the melee with the Washington Nationals after Bryce Harper was plunked with a pitch. That’s another potential role for Sands with San Francisco.  Sands has hit a stout .285 in the big leagues against southpaws.

Sands hasn’t played Double-A ball since 2010 and logically thought he’d left that level behind long ago, but he’s not complaining.

He produced a run-scoring double in his debut for Richmond on Saturday.

On Wednesday, the Flying Squirrels were in Binghamton, N.Y. to play the Rumble Ponies, a New York Mets farm club. Sands, playing 100 miles or so from Middletown, where he spent childhood years before moving to North Carolina, was batting in the cleanup spot.

Sands might wallop two home runs tomorrow night. If he does, he could be on a plane bound for San Francisco. The Giants need help, and maybe he’s that guy.