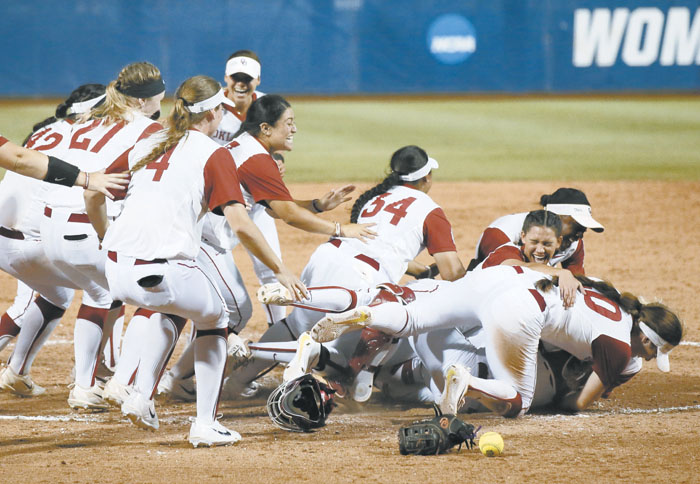 The Oklahoma team celebrates after defeating Florida in the second game of the best-of-three championship series in the NCAA Women's College World Series in Oklahoma City, Tuesday, June 6, 2017. Oklahoma won the game 5-4, and the championship. (AP Photo/Sue Ogrocki)

OKLAHOMA CITY (AP) — Shay Knighten hit a three-run double in the second inning and Oklahoma defended its NCAA softball title with a 5-4 win over Florida on Tuesday night.

Knighten, who hit a three-run homer in the 17th inning to help win Game 1 on Monday, was selected the World Series’ Most Outstanding Player. The Sooners (61-9) took both games from Florida in the best-of-three series to earn their third NCAA title in five years.

Oklahoma freshman Mariah Lopez (18-1) got the win in relief of Paige Parker. Paige Lowary stepped in and threw two innings of perfect relief for her nation-leading 11th save. With a one-run lead, she retired Florida’s Nos. 2-4 hitters in order in the seventh.

Florida pitcher Kelly Barnhill, USA Softball’s National Collegiate Player of the Year, did not play. Florida coach Tim Walton went with No. 3 pitcher Alesia Ocasio (8-2), and she got the loss. Delaney Gourley allowed the double to Knighten in relief.

Top-seeded Florida (58-10) did not allow an earned run in three games to reach the championship series, but the Sooners were able to break through against what statistically was the nation’s best pitching staff.

Oklahoma’s Nicole Mendes homered on Ocasio’s third pitch of the game to give the Sooners a 1-0 lead. Sophia Reynoso responded with a solo shot for Florida in the second.

Knighten’s big hit in the bottom of the second put Oklahoma up 5-3. Florida’s Chelsea Herndon came back with a solo blast in the third to cut Oklahoma’s lead to 5-4.

Oklahoma had just one senior in its lineup and has no senior pitchers.