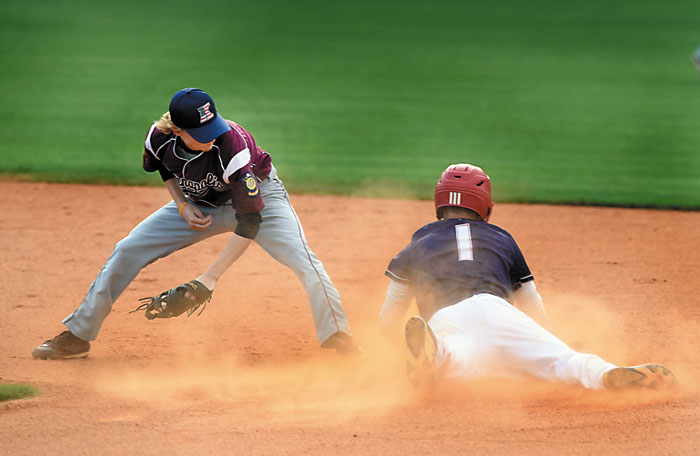 Wayne Hinshaw file photo/for the Salisbury Post ... Rowan’s Chandler Blackwelder (1) is shown stealing second base in an earlier game this season. Last night at Mocksville, Blackwelder had three hits, including a homer, in an 8-5 victory.

MOCKSVILLE — Rowan County barely had to alter the blueprint Tuesday night at Mocksville.

Unblemished Post 342 extended its victory binge to eight games by sticking to its routine — fall behind early, chip away and battle back, then use some late-inning heroics to prevail. It happened again at Rich Park, where Rowan erased a four-run deficit and earned an 8-5 non-division victory.

“It’s a long game,” outfielder Henderson Lentz said. “There’s no need to put pressure on ourselves. We know we’ve got nine innings.”

“Well, if they’re not comfortable with it, we sure seem to get into that situation pretty often,” said Rowan coach Jim Gantt. “I don’t know if its our starter not getting enough work prior to the game or what, but we’re in that position a lot.”

Left-handed pitcher Brandon White had an uneven start for Rowan, yielding two runs, two walks and four hits in two innings. His second delivery of the game was deposited over the left-field wall by Mocksville leadoff batter Cody Smith.

Luke Barringer relieved in the third and induced two groundouts and an inning-ending strikeout. In the fourth he was roughed up for three runs and exited with Rowan trailing 5-1. Gantt summoned Olen Stamper, the West Rowan right-hander who tossed a post-season no-hitter on May 11.

“My instructions were to go out there and compete on every pitch,” Stamper said after winning his first game. “I was trying to get ground balls, trying to keep us in the game. We started scoring runs after that.”

It started with Lentz, Rowan’s No. 9 hitter who opened the top of the fifth with a blistering double to right-center against Mocksville starter Carson James. Teammate Chandler Blackwelder followed with a towering home run, sending a darting, 2-1 fastball into the woods beyond the left-field fence.

“Middle-in,” Blackwelder said after slugging Rowan’s first homer of the season. “I was looking for that pitch and got it. (James) had thrown me an off-speed pitch right before that. All I know is it went really, really high.”

It pulled Rowan within two runs and sparked the turnaround. Rowan caught up in the sixth, when Griffin Myers’ sharp ground-ball single to right loaded the bases with none out against Mocksville reliever David Highman. Lentz — who went 4-for-4 and scored twice — legged out an infield hit to deliver one run and crossed on a one-out wild pitch.

“They don’t hit bad pitches,” losing coach Charles Kurfees said after Mocksville slipped to 5-5 overall. “We’re notorious for swinging at bad stuff. But they wait for the good ones.”

Highman (1-1) was victimized by an eighth-inning error that led to three unearned runs. Rowan went ahead when Lee Poteat’s two-out smash to third-baseman Mikey Smith was misplayed and Lentz hustled home. Catcher Trevor Atwood followed with a two-out, two-run single to right field.

“It doesn’t matter where we are in the (batting) order,” said Lentz. “We can always be a threat.”

Gantt was pleased with the way Rowan surged ahead. “Lee hit it down the line and the third-baseman kind of backed up on the ball,” he said. “It got by him and into the corner. Then Trevor stayed on a 1-2 breaking ball and hit it to the opposite field.”

Stamper stopped the bleeding with three innings of one-hit relief. He struck out five and walked one. “He’s a good fastball that gets on you quicker than you thing,” Gantt said. “It helps that he’s tall — and he’s got a good breaking ball. So he can fill up the strike zone with two pitches.”

Pearce Wilhelm was lights-out in the Mocksville eighth, retiring the side in order and fanning two. Right-hander John Owen, sidelined with elbow tendonitis most of the season, made his second relief appearance and procured the last three outs. The game ended when third-baseman Bryson Wagner forced a runner with three men aboard.

“We just needed to run out some bats and put some pressure on them,” said Blackwelder. “When your nine-hitter goes 4-for-4, that’s pretty comforting.”

NOTES: Rowan is off to an 8-0 start for the first time since 2002. That club won its first 15 games. … Rowan pitchers recorded 13 strikeouts. … Rowan is idle until Friday, when Mocksville visits Newman Park in another non-leaguer. Post 54 hosts Mooresville on Thursday.