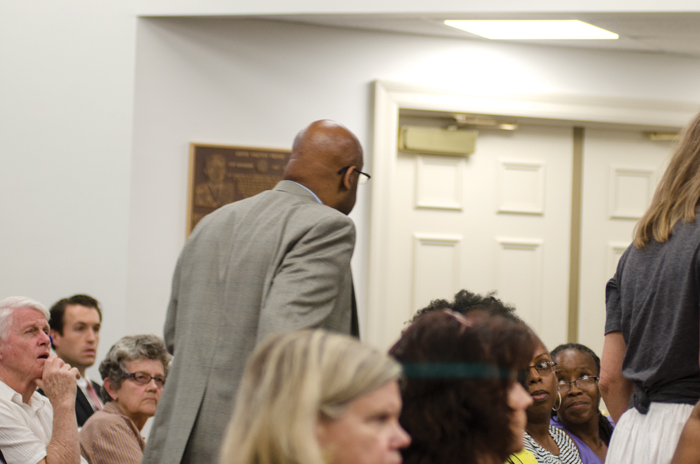 KRISTI CRAVEN/ SALISBURY POST Councilman Kenny Hardin excuses himself from a City Council Meeting at the City Hall in Downtown Salisbury after a disagreement on June 6, 2017.

SALISBURY — After a heated public-comment period, City Councilman Kenny Hardin asked to be excused from Tuesday night’s meeting because of a disagreement with Mayor Karen Alexander.

Hardin confirmed in a follow-up interview that the reason he left was because he felt “disrespected” by Alexander.

The exchange that led to Hardin’s departure began about halfway through the meeting, when Alexander responded to accusations that had been brought up during the public-comment period.

East Spencer resident Carolyn Logan, who frequently attends City Council meetings, first raised the accusations about“secret meetings.” Logan said Hardin was not invited to participate in meetings aimed at preparing city officials and community members for the release of an SBI report on the death of Ferguson Laurent, who was shot and killed when Salisbury police officers served a no-knock warrant at Laurent’s home. A State Bureau of Investigation report released Wednesday cleared the officer of misconduct.

Alexander later responded, saying the meetings were not secret.

“People were called. They were not told that they needed to be secret. They could attend or not attend. And Councilman Hardin was sent that list, along with every council member,” Alexander said.

Hardin contended her statement was false. KRISTI CRAVEN/ SALISBURY POST Councilman Kenny Hardin, right, and Mayor Karen Alexander, left, have a disagreement at a City Council Meeting at the City Hall in Downtown Salisbury on June 6, 2017.

The conversation between Alexander and Hardin escalated, with each of them speaking for about five minutes about what Hardin called their own “realities.”

“My recollection and my reality is … I have not been kept in the loop about anything that’s going on,” Hardin said. “You did not consult me to ask me one thing about this.”

“This is all well and good, but the ‘he said, she said’ stuff — we’re not accomplishing anything,” Miller said.

He pointed out that the council had half of the agenda left to get through.

It was just after Miller finished speaking that Hardin asked Alexander if he could be excused from the meeting. He left shortly after.

A video of the City Council meeting can be found at vimeo.com/cityofsalisburync.