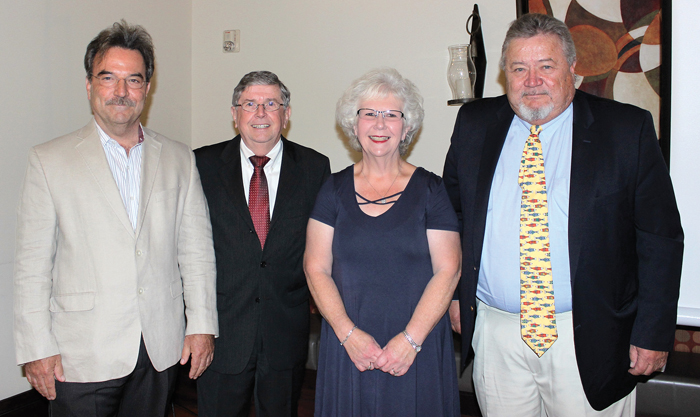 KANNAPOLIS — The Kannapolis City Council recently gathered at Restaurant 46 to announce plans for four council members to run for re-election and the other members to endorse the incumbents, saying now is not the time for change on the council.

The city is in the middle of a revitalization program that will see the construction of a $60 million “demonstration” project, plus a downtown baseball stadium. Those projects, and others, have council members saying the current council needs to remain intact rather than bringing a new member up to speed.

“Overall, we as a group working together have made tremendous progress in the past two to three years, especially in planning and developing the revitalization effort in downtown, as well as attracting many other job creators to our city,” said City Councilman Ryan Dayvault. “The ability to disagree with each other and then be able to work toward a solution that’s amicable to everyone, all while having respect for each other, is something that’s not found often in government today.”

Mayor Darrell Hinnant is up for re-election with council members Darrell Jackson, Dianne Berry and Doug Wilson. Candidates must file with the Rowan County Board of Elections between July 7 and 17, but officials have already announced their plans to run.

“Having the opportunity to serve long-term on the council, I have had the privilege to serve with all the previous Kannapolis mayors except the first mayor chosen at incorporation,” said Councilman Roger Haas. “Mayor Darrell has invested more time and energy in moving the city forward than any mayor I have worked with. He travels, he speaks to investors, promotes our city with devotion and passion. He is definitely the right person for this time in Kannapolis’ journey to revitalization.”

Dayvault and Haas were among the crowd of more than 60 people that came out to support the four incumbents.

“The efforts made and undertaken by this council will forever affect our city, and I ask that you join me in my support of Mayor Pro Tem Wilson, council members Berry and Jackson and Mayor Hinnant,” Dayvault said.

Hinnant talked about how Kannapolis has multiple developments coming from the private sector, with a new business park and several subdivisions with more than 500 homes. The business park includes a 1.2-million-square-foot distribution center with more than 950 employee parking spaces. The area in question is 117 acres on Macedonia Church Road. That project alone could be close to $100 million in private development.

Hinnant said, all told, Kannapolis could see more than $200 million in private investment over the next 12 to 15 months.

“We have a lot of work to get done, we have a lot of opportunity coming forward and, as a result of that, we don’t think now is the time to make a change in leadership,” Hinnant said. “And we think over the next 18 months, we’ve got a lot of critical decisions to be made.”

Those decisions come with a lot of background information that could take a newcomer a long time to catch up on, Hinnant said.

“Just to figure out where you are going when you come on council and, as a result of that, by the time that person is up to speed, we’ve all made the critical decisions,” Hinnant said.

The council has worked on plans to relocate the Kannapolis Intimidators stadium downtown to create a sports and entertainment complex, as well as redesigning the streetscape of West Avenue.

The city is moving forward on a project to replace and upsize aging and undersized underground utilities such as water, sewer and stormwater, leading to the redesign of West Avenue.

The sports and entertainment venue is set to be a 4,000-seat facility with eight luxury suites, a team store and other amenities, officials said. The streetscape of West Avenue will be redesigned to add more of a park feel to downtown as well as outdoor dining and attractions, such as a water feature.

The complex should cost about $37 million, and the infrastructure/streetscape program, about $20 million to $25 million.

In August, the City Council selected Lansing Melbourne Group to develop a $60.6 million project downtown. It will be a mixed use of multistory residential, retail and parking between Main Street and West Avenue and built in two phases. The project will require the demolition of a former State Employees’ Credit Union and Transit Damaged Furniture. Any demolition must be approved by the city, according to the development agreement.

The demonstration project is designed to bring foot traffic to Kannapolis, and the streetscape lends itself to that traffic, officials said.

“It took us four years to get to where we are now,” said Berry. “It’s a learning experience, but it’s made us tenured council members who understand municipal government. Losing ground, if we are not all re-elected, will redirect our timelines and goals to see this project through. We are too close for this to happen right now. Every day we can serve our citizens puts us closer to our downtown project becoming a reality and the promise of even more jobs, housing and growth to come.”