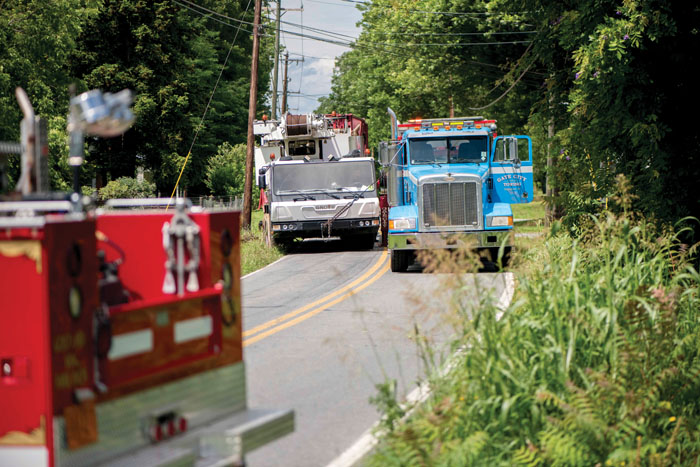 St. Stephens Church Road was block most of the day on Monday after a large crane en route to Cabarrus County got stuck in a ditch requiring two large tow trucks from Greensboro to be called. Jon C. Lakey/Salisbury Post

GOLD HILL — The narrowness of St. Stephens Church Road, something that residents and store owners in Gold Hill have cautioned about for years, proved demonstrable again Monday when a large crane slipped off the pavement and detoured traffic for hours.

The driver of the crane told authorities he had tried to give room to a passing logging truck when his right-side wheels slipped off the road into a ditch.

St. Stephens Church Road, which is roughly 17 feet wide, has virtually no shoulder in this area.

Members of the Gold Hill Fire Department detoured traffic away from the area as two large wreckers from Greensboro were called in to pull the crane back onto the road. The accident, which happened near Baptist Church Road, occurred in the late morning and was still not cleared by 3:30 p.m. Monday.

Part of the crane’s body came to rest against a utility pole, complicating matters. “The more he turned, the deeper he got,” said Charles Miller, an assistant chief with the Fire Department.

Wallace Smith, a resident of St. Stephens Church Road, said he and his neighbors have seen mailboxes, signs, gates and fences struck by passing trucks, which have the Department of Transportation’s permission to use the road as a truck route.

Smith said he has lost two mailboxes, each hit on separate occasions by logging trucks that never stopped. Smith bought his house two years ago and said he has spent $600 on mailboxes already.

“You can see at the side of the road where they run off every morning,” Smith said. “… The road is too small for (big trucks) to start with.”

The trucks also are traveling too fast, Smith added.

Smith and Miller said they realize the road is probably a shorter route, but Miller said it would make more sense to direct the bigger trucks farther south on U.S. 52 and then onto Old Beatty Ford Road, bypassing the Gold Hill village.

Smith said he used to be a truck driver himself and understands trucks must have routes.

The crane belonged to Guy Turner Inc. of Greensboro, and the two wreckers came from Gate City Towing. The wide cab of the crane just missed the utility pole before the vehicle went off the road.

Miller said the road has no shoulder and if you’re forced off the road, you’re immediately in a ditch. He said he heard the crane was on its way to Mount Olive Road in Cabarrus County to assist in the installation of a cellphone tower.