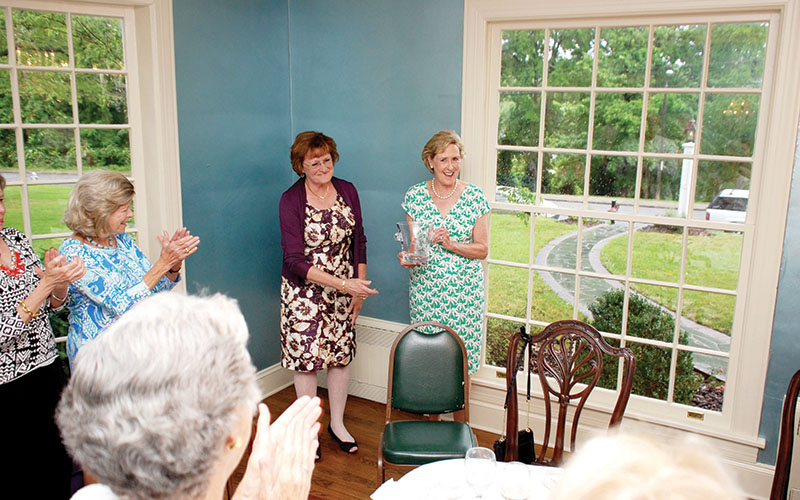 SALISBURY — The Andrew Jackson Society dinner Sunday evening was supposed to be “A Supper on the Lawn,” but heavy afternoon showers forced things inside.

The Clement Cup is named for Ed Clement, a continued driving force for the foundation and one of its founders and charter members in the early 1970s.

Kluttz was recognized for her preservation work as a private citizen, the mayor of Salisbury from 1997 to 2011 and, most recently, as secretary for the N.C. Department of Natural and Cultural Resources, from 2012-2016.

As a cabinet secretary in Gov. Pat McCrory’s administration, Kluttz made a lasting impression in taking her department’s campaign to save state historic preservation tax credits to 52 different cities and towns in North Carolina.

At stop after stop, Kluttz told how historic preservation tax credits had led to $1.5 billion in private investment over the decades they had been in place.

At the community rallies, Kluttz celebrated with local officials the economic development successes historic preservation already had provided and discussed the kinds of projects that could be helped in the future.

The N.C. General Assembly reinstated the tax credits in 2015 after Kluttz garnered what she felt was necessary grass-roots support. McCrory, a former mayor himself, understood the benefits to cities of the tax credits and attended 10 out of the 52 community rallies Kluttz was involved with.

“Anyway, it worked, and it only worked because of you,” Kluttz told the dinner crowd assembled Sunday night at the home of Diana and Jason Keith on Lake Drive.

The Andrew Jackson Society is a major fund-raising arm of Historic Salisbury Foundation.

Susan Sides, president of the foundation, presented Kluttz with the Clement Cup, and she said Kluttz’s words “give us inspiration to keep working.”

“Most of us who are here tonight work to protect the historic character of Salisbury and Rowan County,” Sides said, ” but few of us have made the impact that Susan Kluttz has made on our neighborhoods, our city and our state.”

Sides said Kluttz became a household name throughout the state because of her efforts in trying to save the preservation tax credits from a General Assembly which wanted them to fade away.

Coming from Salisbury, widely recognized for its preservation efforts, Kluttz said, “you can imagine how shocked I was when I realized the General Assembly was going to let the tax credits expire.”

Kluttz said some state legislators told her she was wasting her time, and no matter what she did to try and restore the tax credits, those efforts would be killed. She said she realized the General Assembly needed to hear from people in communities such as Salisbury where the tax credits led to economic investment and jobs.

“I realized that’s who I needed to find,” Kluttz said.

Before she was mayor or a state cabinet secretary, Susan Kluttz and her husband, Bill, joined Margaret and George Kluttz in buying and restoring the 1859 Kluttz Drug Store building on the Square.

Bill and Susan also renovated and live in the 1877 Kerr Craige House on West Bank Street, and when the couple moved back to Salisbury in the mid 1970s, they first lived in another historic home.

Susan Kluttz praised Clement and the people who served as charter members of the foundation and what they did to preserve important homes and neighborhoods.

“It gave our homes hope,” Kluttz said. “That was something badly needed here in the mid 1970s.”

Sides credited Kluttz as mayor for incorporating historic preservation in the city’s Vision 2020 comprehensive plan and the 2010 Downtown Master Plan.

“She consistently promoted the benefits of economic development and revitalization that flow from successful historic preservation projects,” Sides said.

“Susan worked tirelessly to preserve, protect and revitalize the historic fabric of the city of Salisbury.”

Sherry Beck served as chairperson for the event.