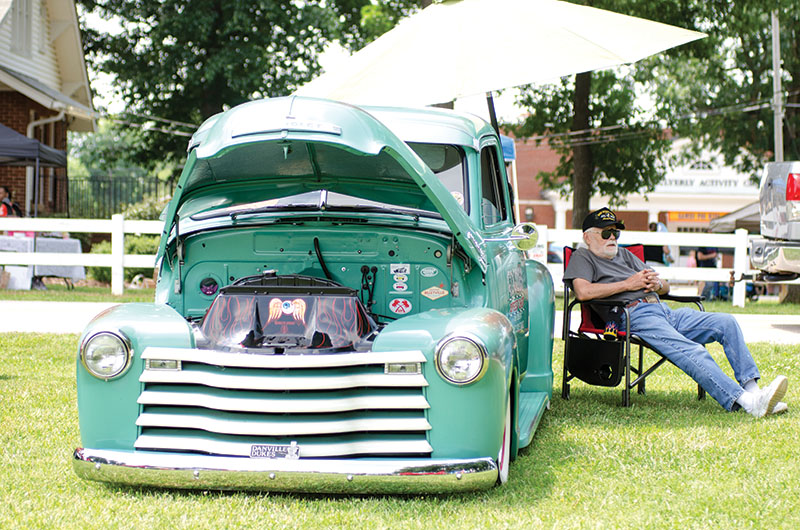 KRISTI CRAVEN/ SALISBURY POST Eddie Brown sits with his 1950 Chevrolet during a car show at the annual Nazareth Fun Fest in Rockwell on June 3, 2017.

ROCKWELL — The grounds of Nazareth Child and Family Connection were crowded with cars, booths and families Saturday morning as the organization kicked off its annual Fun Fest. Visitors browsed rows of polished, classic cars, sat under the shade and listened to live music or wandered from tent to tent looking at crafts for sale.

“It’s just a day of having a good time,” Vernon Walters Jr., president of Nazareth, said.

But the Fun Fest is more than just a summer Saturday fair — it’s also a celebration of the organization’s anniversary.

This year, Nazareth celebrates 111 years of reaching out to children and families in the area. Started as a traditional orphanage, the home now connects children to foster families, runs day treatment programs and serves children in need over a 20 county area.

Walters said the organization specifically serves “children who can’t live at home,” with more than 40 children living on the Crescent Road campus, and a dozen others housed with foster parents.

“It’s why we exist,” Walters said.

Nazareth licenses and runs its own foster care system, in addition to children staying on the Crescent Road Campus. Walters said current facility residents include infants through those 21 years of age.

The Fun Fest represents Nazareth’s largest yearly fundraiser, bringing in approximately $70,000 through raffles and other sales. It’s also an opportunity for the organization to open its doors and invite the community in to “see what we do,” Walters said.

“This is how we raise our money,” he said.

This year, the festival was auctioning off a Toyota Corolla, courtesy of Cloninger Automotives. Nazareth also runs a Salisbury-based resale shop on East Innes Street.

Though it was still early in the day, Walters said he thought there had been a good turnout.

“We’ve had a really good crowd here,” he said. “… We couldn’t run this place without community support.”

For some county residents, coming to the Fun Fest is a tradition. Jill Leazer said she tries to go every year.

“Just to get out of the house and see what was going on,” she said.

She said she enjoys looking through the booths with her children, and appreciates that the event benefits local children.

For Priscilla Hicks, it’s a chance to hear good music. Her husband, Terry, likes to look at the classic cars. The couple’s two foster daughters enjoy the event, as well. Hicks said she’s enjoyed being a foster mother, and that the two call her and Terry “grandma and papa.”

“I wanted to change somebody’s life and help them,” she said. “There’s a great need for it in Rowan County. …There’s so many kids out there that just need someone to love them.”

Hicks said she and her family had just arrived at the festival, and were looking forward to what the rest of the day brought.