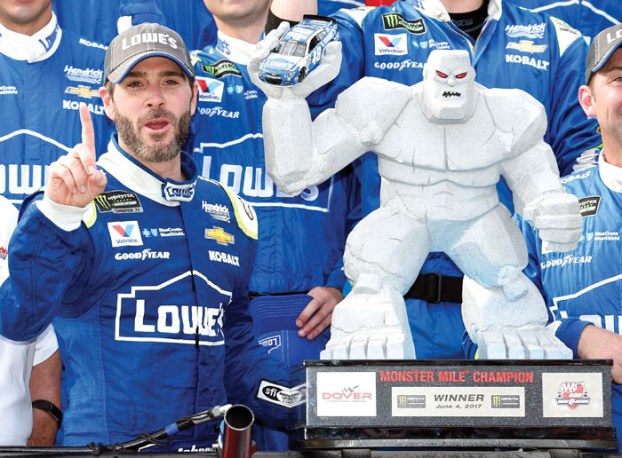 DOVER, Del. (AP) — Hooked on NASCAR as a kid, there was something about Cale Yarborough that made a fan out of Jimmie Johnson. Johnson was glued to the set as he sat on a dirty old couch at home in El Cajon, California. He loved Yarborough’s fearlessness and the way the Hall of Fame driver kind of reminded Johnson of his grandfather.

Johnson even stopped at a Hardee’s on a road trip because he believed the fast-food joint and Yarborough’s sponsor was the race shop. There was one more part of Yarborough that Johnson admired:

The same number in the record book as that California kid who grew up to become even better than his idol.

Johnson sped off on the final restart Sunday and earned another slice of NASCAR history, winning in overtime at Dover International Speedway for the 11th time and moving into a tie for sixth on the career victories list.

He then tipped his cap — more like, his tribute helmet — toward Yarborough.

Johnson again made an impact at his favorite track — and he worked hard to take this checkered flag. He was forced to start from the rear of the field because of a gear change, then zipped past Kyle Larson in overtime on the restart.

“You put that route in front of me and I’ll chase it down,” Johnson said.

Johnson and Yarborough are tied for sixth on the career wins list.

Johnson may have had a sense history was ahead in the No. 48 Chevrolet. He wore a helmet painted in tribute to Yarborough. He tweeted this weekend, “Growing up in El Cajon I never imagined I would have a chance to tie Cale in wins.”

Johnson, the seven-time NASCAR champion, has racked up a Hall of Fame resume all with team owner Rick Hendrick and crew chief Chad Knaus. He plopped his helmet on top of the Chevy in victory lane and swapped it out for a throwback No. 28 Hardee’s Chevrolet Yarborough hat.

“I remember going to a race in Oklahoma with my parents, my brother, we’re driving across the country and we pull into a Hardee’s,” Johnson said. “I had no idea it was a burger stand. I really thought when I walked in the door that I was going to Cale Yarborough’s race shop. I was very disappointed. I had a burger and left and understood the world of sponsorship.”

Johnson and the 78-year-old Yarborough are the only drivers in NASCAR history to win three consecutive championships.

Johnson, who won for the third time this season, is on a drive for a record eighth. With more wins like this one, Johnson just may pass Dale Earnhardt and Richard Petty and get No. 8. He drove the entire 10-race Chase last season with a tribute helmet to Earnhardt and Petty.

“Drivers have always used helmets as their voice,” Johnson said.

His says loud and clear he has a deep respect for NASCAR’s greats.

Larson had his second win of the season in his grasp until he spun the tires on the restart.

There was a multi-car wreck on the final lap that brought the race under caution, but Johnson had hit the line needed to make the race official and he coasted to the finish.

Waltrip and Bobby Allison are next on the wins list with 84.

At this rate, Johnson could pass them by the end of the season.

“You have to say he’s one of the greatest to race in this sport,” Hendrick said.

Here are some other happenings from Sunday’s race:

Kyle Busch’s No. 18 Toyota lost a tire as it exited pit road on the first stop. Busch, who started from the pole, suffered damage to the left rear fender when the wheel became dislodged. Busch’s crew chief could face major penalties for the detached wheel.

Kurt Busch, Brad Keselowski and Ricky Stenhouse Jr. all made early exits. Busch got loose and connected with Keselowski in the first stage with both runners inside the top five. Keselowski smacked the wall and went straight to the garage. Busch continued with heavy damage until he retired following another wreck about 30 laps later.

Keselowski finished 38th a week after he also wrecked out of the Coca-Cola 600 and was 39th.

“I don’t know if it was Kurt’s fault, just one of them racing deals,” Keselowski said. “We line-up double-file and somebody got loose and just took us out. What a bummer.”

NASCAR heads to Pocono Raceway for the first of its two stops at the triangle track. Kurt Busch is the defending race winner.

OAKLAND, Calif. (AP) — Stephen Curry dribbled every which way and beat LeBron James to the rim in a move... read more