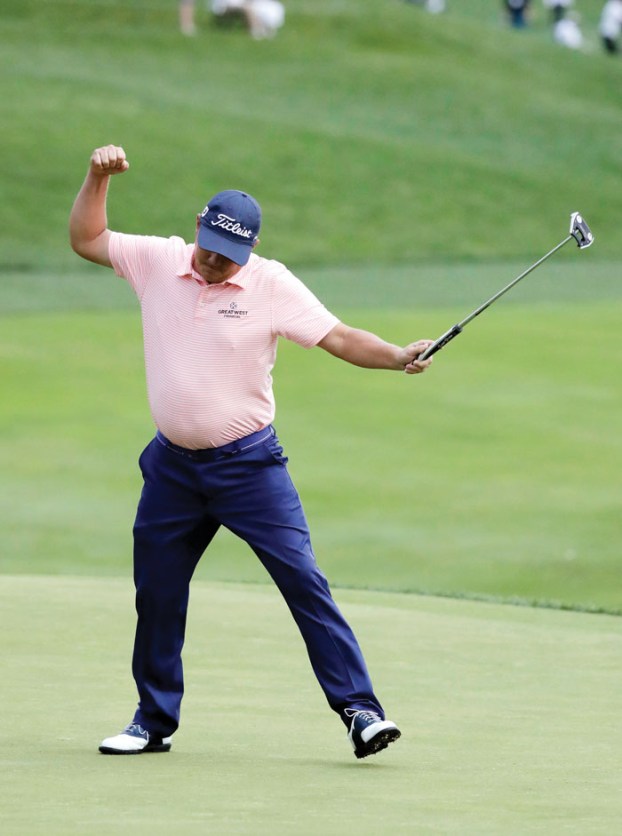 Jason Dufner reacts after making a putt on the 18th green during the final round of the Memorial golf tournament, Sunday, June 4, 2017, in Dublin, Ohio. Dufner won the tournament. (AP Photo/Darron Cummings)

Jason Dufner bounces back to win the Memorial

DUBLIN, Ohio (AP) — Jason Dufner spent quality time on the practice range that played in a big role in his victory at the Memorial.

It had nothing to do with his swing.

This was about beating balls to burn off the anger from a 5-over 77 in the third round that looked as though it might cost him the tournament. His pulse back to normal, which for Dufner means barely beating, he bounced back in a big way Sunday.

He stayed in the game during a wild stretch early, and then hit the ball so pure that he hit every green until the 18th and only once had a birdie putt over 12 feet. And then he capped off his 68 with a 30-foot par putt for a three-shot victory.

“Yesterday was not my best day,” Dufner said. “But I had to get over it quick. It’s a 72-hole tournament, there’s a lot of things that can happen out there. I knew I was still in the mix.”

The recap shows what an up-and-down week it was for Dufner.

He set the 36-hole record at Muirfield Village on Friday and built a four-shot lead. The 77 on Saturday dropped him four shots behind. And he wound up winning by three shots over Rickie Fowler and Anirban Lahiri.

“It was important for me not to leave this golf course angry and upset,” Dufner said. “I needed to leave it at the golf course yesterday, I felt like, and to move on. It would be best for me today. It wasn’t something that I planned or that I thought about, it’s just that’s what I felt like I needed to do.

Dufner finished at 13-under 275 for his fifth PGA Tour victory, and he earned mentions with Jack Nicklaus and Nick Faldo. He joined Nicklaus as the only Ohio-born winners of the Memorial, the tournament Nicklaus created in 1976 and won twice. And not since Faldo in the 1989 Masters had anyone shot a 77 in the third round of a PGA Tour event and still gone on to win.

He was happier about the first reference.

“I’ll always have a close place in my heart for this event, being a champion now,” Dufner said. “It will be very special for me to look back and know that I’m part of an event that Mr. Nicklaus put on out here on the PGA Tour.”

“I think he probably likes this one better than Augusta right now,” Nicklaus said.

Fowler, in prime position to force a playoff on the 18th hole by making birdie, instead made bogey after Dufner ended it with his big par putt. Fowler shot 70 and tied for second with Lahiri, who closed with a 65 before both of the two rain delays that lasted a combined 21/2 hours.

Justin Thomas missed consecutive short birdie putts that stopped any momentum he had. Matt Kuchar fell back with three bogeys on the back nine. They finished another shot behind. Daniel Summerhays, who began the final round with a three-shot lead, began the back nine with two straight bogeys, and he finished with a double bogey for a 78 to tie for 10th.

Dufner got back into the mix quickly when Summerhays lost his three-shot lead after four holes. Over the next five hours because of the rain delays, four players had at least a share of the lead and seven players were in the hunt.

“I feel like if I wanted to have a chance to win today that I needed to hit it close,” he said.

He stuffed his approach on No. 10 to 4 feet and holed a 10-foot birdie putt on the par-3 12th. After missing a pair of birdie chances in the 12-foot range on the next holes, he hit the par-5 15th in two and two-putted for birdie from 40 feet to take the lead.

Fowler fell back when he missed the 14th green long and took bogey, and then hit his fairway metal into the gallery on the 15th and failed to make birdie. Dufner gave himself a cushion on the 17th with his best drive of the day and a wedge to 3 feet.

He made it more exciting than he preferred on the 18th by driving into thick rough just short of the bunker, and hacking out into more rough. He put his third shot to just over 30 feet on the 18th. Fowler, who pulled his wedge left of the green, had Dufner go first to make sure Fowler would have needed to hole the birdie chip to have a chance. Dufner ended the suspense with a putt and a rare show of emotion, slamming down his fist.

“I made the swings and couldn’t convert and make the birdies,” Fowler said. “But to see him make the putt on the last was cool.”

DOVER, Del. (AP) — Hooked on NASCAR as a kid, there was something about Cale Yarborough that made a fan... read more