At 103, no plans to slow down for Kannapolis resident Edna Price 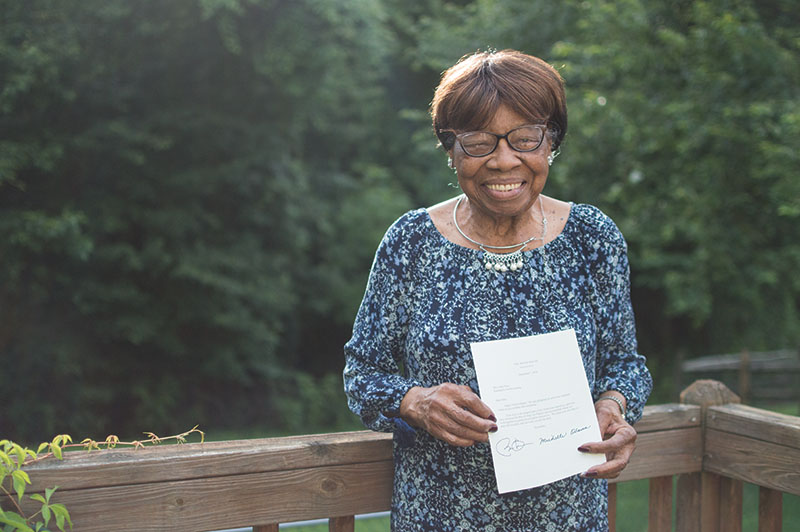 Josh Bergeron / Salisbury Post - Edna Price, who recently turned 103, poses for a picture with a letter from former President Barack Obama congratulating her on her recent birthday. Price was born in Rockwell in 1914.

Edna exercises twice per week, plays bingo three times per week, cooks occasionally and does her own laundry. Her family members joke that Edna occasionally gets upset if others do household tasks for her.

She was born on May 24, 1914 — the second-oldest of five siblings. At the time, her family lived in the Rockwell area, she said. The county looked much different then. There were 45,000 people living in Rowan County at the time — about a third of its current population, according to U.S. Census estimates.

Now, Edna lives on the Rowan County side of Kannapolis. She spends her days at Carolina Senior Care in Lexington. She attends Crown in Glory Lutheran Church in Salisbury.

To celebrate her birthday last week, Edna’s family had a weeklong celebration. One day, she had a steak and shrimp dinner. On another, she enjoyed a Chinese food dinner. The celebration ended in Baltimore with a family dinner.

The letter states, “Dear Edna, Happy 103rd Birthday! We are delighted to send our warmest wishes as you celebrate this milestone. Your story is part of the American narrative, and you have witnessed the best of what our nation can accomplish when we work together in pursuit of a brighter tomorrow. We hope you are able to enjoy the occasion, and we wish you all the best.”

The letter is dated Dec. 7, 2016. Amonica Ajayi, Edna’s granddaughter, said she sent information to the White House months in advance to ensure Edna would receive the a letter.

Every year, Edna tells relatives that she “might not make it.”

Ajayi said her grandmother has only been to the hospital twice.

Edna said there’s no particular secret to her longevity. She said 103 years doesn’t feel much different than 102.

“People have asked me how does 103 feel, and I said, ‘I don’t know. It sort of feels the same,’” Edna said. “Now, I eat good. I do like vegetables, but I don’t have any special secrets. I eat whatever comes along because I do have a good appetite.”

Edna said she thanks God every day for her years of life.

“I don’t know why he is letting me hang around this long, but it must be for something,” she said.

As a child, Edna attended classes in a one-room school house. After reaching the fifth or sixth grade, Edna recalled moving to a Lutheran school, which also held classes in a small building. Later, she was accepted to the college now known as North Carolina Agricultural and Technical State University, commonly called N.C. A&T. Instead of attending college, Edna, at her parents’ request, stayed home and got a job as a cook.

At 22, she married Fred Herman Price. The couple, who had known each other since childhood, lived much of their lives together in Baltimore. They would stay married until Fred Price’s death in 1974. He died after a battle with cancer, and Edna hasn’t remarried.

In Baltimore, Edna worked in a glass factory, inspecting the company’s products for cracks or chips, until her retirement. She retired after a 33-year career at the factory.

She didn’t talk much about the civil rights movement or issues with racism during her life. Edna says she didn’t experience issues with racism as a young woman. However, when she and her husband moved into a middle-class neighborhood in Baltimore, they were the first black residents.

In the late 2000s, Amonica Ajayi’s family and Edna moved back to Rowan County. Edna said she still hasn’t gotten used to the massive changes since she moved away decades ago. She was 28 when she moved to Baltimore.

“It’s just everything that’s different,” she said. “Every time I look around, I see something new.”

“The city of Baltimore is a pretty good size, but, you know, people are worse up there,” she said. “They’re killing one another.”

“They’re not as friendly,” Amonica Ajayi chimed in.

“No, give it to ’em raw,” joked Edna’s great-grandson Phillip Ajayi. “They’re terrible.”

When she turned 80, she had her first alcoholic drink in years. Edna’s first drink came shortly after being married. At that time, it wasn’t possible to buy alcohol at a store. So, when Edna and three of her friends went to a party, they sipped on moonshine. It was called “white lightning,” Edna recalled.

“We got drunk and I didn’t drink any more after that because it knocked all of us out,” she said.

Amonica and Phillip Ajayi joked that other items on Edna’s list of firsts include skydiving and riding a motorcycle.