Worth the wait: Davidson stuns UNC in NCAA regional debut 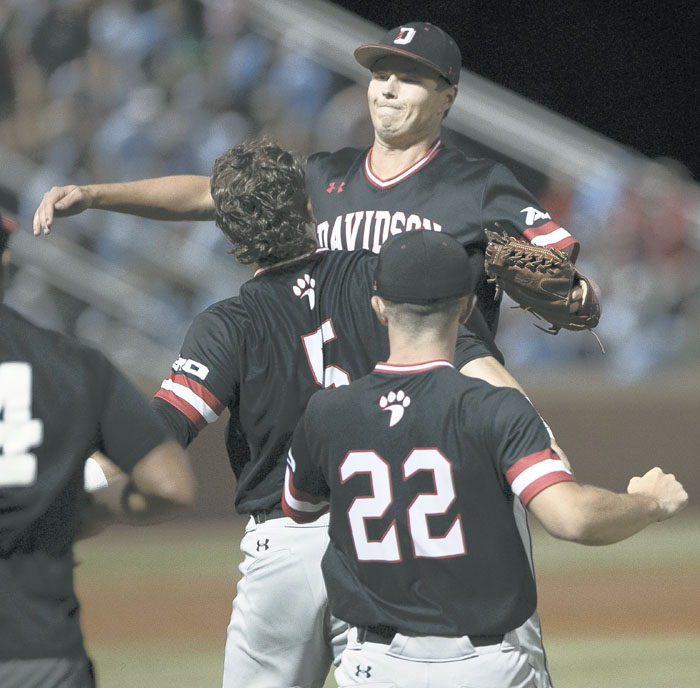 Davidson College has played baseball for 115 years, generally with little success. The Wildcats made it to the NCAA Tournament for the first time this year, and they made a memorable debut Friday.

The No. 4 seed in the Chapel Hill Regional, Davidson pulled a huge upset by beating No. 2 national seed North Carolina 8-4.

North Carolina became the highest national seed to lose its regional opener since a No. 2 Florida lost to College of Charleston in 2014. The Gators were eliminated the next day.

College of Charleston, however, was in the tournament for the sixth time back in 2014. Davidson had never won a baseball title of any kind before beating VCU in the Atlantic 10 final on Sunday, and the Wildcats’ all-time record is more than 600 games under .500.

“We’re playing with house money. That’s our feeling right now,” said Durin O’Linger, who allowed three runs in six innings. “We’re just going out there and having fun, staying loose. If we win, we win, and we’re just hoping to extend the ride as long as we can.”

Davidson rocked ACC pitcher of the year J.B. Bukauskas, led 8-0 after five innings and moved to a winners’ bracket game Saturday against Florida Gulf Coast, the other team that is in the national tournament for the first time. FGSU beat Michigan 10-6, putting the Wolverines into an elimination game against North Carolina.

Davidson and North Carolina have met every year since Mike Fox began coaching the Tar Heels. They had won 18 of 19 against Davidson under Fox before Friday. Carolina won this year’s regular-season meeting 7-6 in 10 innings.

TAR HEELS BOUNCE BACK AGAINST MICHIGAN

Tyler Lynn finished with three hits for the top-seeded Tar Heels (48-13), the tournament’s No. 2 overall seed. They were playing less than 24 hours after being upset by fourth-seeded Davidson in their opener.

Evan Roberts worked eight-plus innings to help the fourth-seeded Wildcats (34-24) move within one victory of a berth in the super regional round. Davidson knocked off top-seeded North Carolina, the tournament’s No. 2 overall seed, on Friday night.

Lebek’s RBI single in the second gave the Wildcats an early lead, and Jones’ run-scoring single in the eighth made it a two-run game.

WINSTON-SALEM (AP) — Gavin Sheets singled home the winning run in the bottom of the ninth inning, and Wake Forest rallied to beat West Virginia 4-3 on Saturday night in the NCAA Tournament.

Bruce Steel hit a two-run homer in the fifth to start the comeback for the top-seeded Demon Deacons (41-18), who moved one win from the super regionals.

Jonathan Pryor singled to start the ninth for Wake Forest and was bunted to second. After Stuart Fairchild was intentionally walked, Pryor lofted a drive into the gap in right-center to end it.

LEXINGTON, Ky. (AP) — Evan Mendoza hit a two-run triple and scored on Andy Cosgrove’s single in the fifth inning, and Sean Adler allowed two runs and six hits in 7 2/3 innings of relief as North Carolina State held off Kentucky 5-4 on Saturday night to move within a game of clinching the NCAA Lexington Regional.

Evan White’s one-out homer in the top of the ninth inning brought the top-seeded host Wildcats (40-21) within a run. But Wolfpack reliever Austin Staley regrouped to get the final two outs for his fifth save and give third-seeded N.C. State its second consecutive one-run tournament victory.

The Wolfpack (36-23) await the elimination game winner between Indiana and Kentucky on Sunday.

Jackson Cramer’s two-run homer in the first gave second-seeded West Virginia (35-25) a 3-0 lead. Steel’s shot made it a one-run game, and the Demon Deacons tied it at 3 on Pryor’s RBI double in the seventh.

The Mountaineers face third-seeded Maryland on Sunday with the winner needing to beat Wake Forest twice to advance.

A look around the country:

In addition to North Carolina losing, No. 8 Stanford dropped its second-round game to Cal State Fullerton 4-1. No. 1 Oregon State, No. 3 Florida, No. 4 LSU, No. 5 Texas Tech and No. 7 Louisville won their openers. No. 6 TCU was rained out.

Southeastern Conference teams went 7-1 and the Atlantic Coast Conference and Big 12 each opened 4-2. The Big Ten got off to 1-4 start, with Iowa posting the only win. The Pac-12 was 1-3 Friday, its only win being Oregon State’s 8-2 victory over Holy Cross.

GAME OF THE DAY

Missouri State 6, Oklahoma State 5, in Fayetteville, Arkansas.  Jeremy Eierman’s second homer of the game was a two-run shot in the ninth for a walk-off win. Oklahoma State had taken a 5-4 lead in the top half on a wild pitch. With one man on and two outs in the bottom half, Eierman launched a 2-1 pitch from Trey Cobb far over the right-field fence.

Houston thought it tied its game against Iowa 4-4 in the bottom of the sixth when Lael Lockhart Jr. drove a ball into the left-center gap for what looked to be a double scoring Joe Davis from second.

Iowa appealed that Lockhart’s left foot missed the bag as he rounded first base. Pitcher Kyle Shimp tossed the ball to Jake Adams, Lockhart was called out and the run was taken down.

Rob Calabrese of Illinois-Chicago went deep to give his team a 6-1 lead over Southern Mississippi in the fifth, but the Golden Eagles came back to win 8-7. Radford’s Adam Whitacre had a slam and a triple and drove in all of his team’s runs in an 11-6 loss to Louisville. Aaron Dodson connected to put Baylor up 4-2 in the third, but the Bears lost 8-5 to Texas A&M.

— Keegan Thompson of Auburn went eight innings to match his season high and allowed four hits and struck out nine in a 7-4 win over UCF.

— Yale’s Scott Politz threw his seventh complete game of the season in a 5-1 win over Nebraska but only his second in a game that went nine innings. The Ivy League plays seven-inning doubleheaders.

— Oklahoma State’s Garrett Benge hit for the cycle in the loss to Missouri State. He doubled in the first, homered in the fourth, singled in the seventh and tripled in the ninth.

— West Virginia, in the tournament for the first time since 1996, got two homers apiece from Jimmy Galusky and Kyle Davis against Maryland.

— Vanderbilt’s Will Toffey has been torrid since missing five games in May because of a shoulder injury. He went 4 for 5 with a double, home run and three RBIs against St. John’s. He’s 19 for 34 (.559) with four homers, 13 runs and 15 RBIs over his last seven games.

— Freshman Will Holland, who came in batting .210 out of the 9-hole for Auburn, doubled and hit a three-run homer against UCF. It was his first homer since March 17.