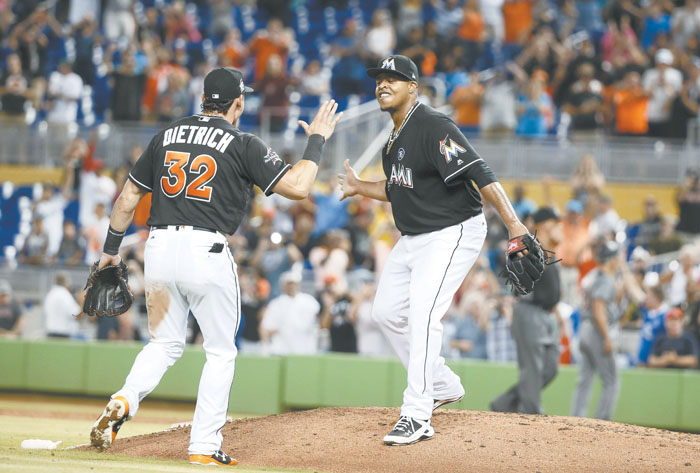 MIAMI (AP) — Edinson Volquez’s day was nearly over after three pitches. And he strongly considered leaving the game after five innings because of sharp ankle pain.

A couple hours later, nothing was hurting.

He stuck around — and pitched the game of his life.

Volquez threw the sixth no-hitter in Marlins history, facing the minimum 27 batters on Saturday and beating the Arizona Diamondbacks 3-0. Tied for the major league lead in losses when the game began, he struck out 10, and the two baserunners who reached on walks were erased by double plays.

He needed 98 pitches, the last of those striking out Chris Owings to complete the masterpiece.

It’s the first no-hitter in the majors since Jake Arrieta did it for the Cubs on April 21, 2016, at Cincinnati, and the first time Arizona was no-hit since the Marlins’ Anibal Sanchez threw one on Sept. 6, 2006.

Volquez (2-7) was nearly knocked out of the game after just one batter, when he collided with Diamondbacks leadoff man Rey Fuentes as he covered first, rolled his ankle and took a hard fall to the turf.

“I thought I broke my ankle,” he kidded after the game.

Alas, that was the only hit the Diamondbacks got. Luckily for Volquez, body blows don’t show up in the scorebook.

“I have faith in God,” Fuentes said. “And if there was a plan for Volquez, today was his day.”

The 33-year-old righty was one of the pitchers the Marlins brought in this past offseason in part to fill the void caused by the death of ace Jose Fernandez, who died in a boat crash last September.

Fernandez was very much on Volquez’s mind Saturday.

So was Yordano Ventura, the Kansas City pitcher who was killed in a car crash in the Dominican Republic in January. Saturday would have been Ventura’s 26th birthday. He and Volquez were not just countrymen, but close friends.

“It was special for me to dedicate the game to him,” Volquez said.

Volquez’s first season in Miami started about as badly as possible; the Marlins lost eight of his first nine starts and Volquez dropped his first seven decisions.

Yet on this day, he was nearly perfect.

“Just a lot of things lined up,” Marlins manager Don Mattingly said. “And his stuff was really, really good.”

Nick Ahmed — who broke up a no-hit bid by Milwaukee’s Chase Anderson in the eighth inning one week earlier — led off the ninth for Arizona and struck out on four pitches. Pinch-hitter Daniel Descalso came up, and after falling behind 2-0 in the count, Volquez stopped for a moment, composed himself with a deep breath, and eventually got the strikeout.

That left it up to Owings, another pinch-hitter.

And then came a swing and a miss at a change-up for strike three, one that got away from catcher J.T. Realmuto for a brief moment before he fired to Justin Bour at first as the Marlins swarmed the field in celebration.

“Great mentor, great leader on the team,” Realmuto said, as three workers on the field dug up the rubber for Volquez. “It’s really awesome to see a guy like that get an accomplishment like this.”

It was the Marlins’ first no-hitter since Henderson Alvarez pitched one against Detroit on the final day of the 2013 regular season.

Volquez is the epitome of a baseball journeyman. The Marlins are his seventh franchise in his 13 big league seasons, and he came into Saturday with just a 90-86 career record.

He was an All-Star in 2008, when he went 17-6 with Cincinnati. In 2015, Volquez helped Kansas City win the World Series crown and started Game 1 on the same day his father died.

“This is one of those days, you didn’t know what was going to happen,” Volquez said. “And today I had a no-hitter.”

CINCINNATI (AP) — Matt Adams feels comfortable at Great American Ball Park, and it showed again in one of those games that just wouldn’t end.

Adams hit his first career grand slam and connected again for a solo shot in the 12th inning on Saturday, powering the Atlanta Braves to a 6-5 victory over the Cincinnati Reds in a game that lasted 4 hours, 20 minutes.

Adams’ one-out homer off Blake Wood (0-4) saved the Braves after they blew a lead for the second day in a row. It was Adams’ fourth career multi-homer game, his first since 2014. He now has nine career homers at Great American, his most at any road park.

“It’s just a park where I see the ball good, and that definitely helps with the confidence,” Adams said.

Jim Johnson (3-1) escaped a threat in the 11th and finished it off for the win, a day after he blew a lead in the ninth. The Reds rallied for a 3-2 lead in 10 innings on Friday night.

The Braves ended their three-game losing streak. They won for only the second time in seven extra-inning games this season.

Both teams had chances throughout. The Braves stranded 10 runners, the Reds 15.

Adams hit his grand slam in the fifth inning off Scott Feldman. He’s homered four times since he was acquired from the Cardinals on May 20. Eight of his 13 hits with Atlanta have gone for extra bases.

Dickey is 0-2 in his last six starts with a 6.31 ERA. His last victory came on May 2 over the Mets. His biggest problem: 21 walks in those six starts.

“I’m somewhat embarrassed by the way I’ve been throwing this year,” Dickey said. “I’m a guy that’s traditionally a slow starter, but I’ve never walked this many guys in my life.”