The shop in back: After 40 years, florist David Harrison eyes retirement 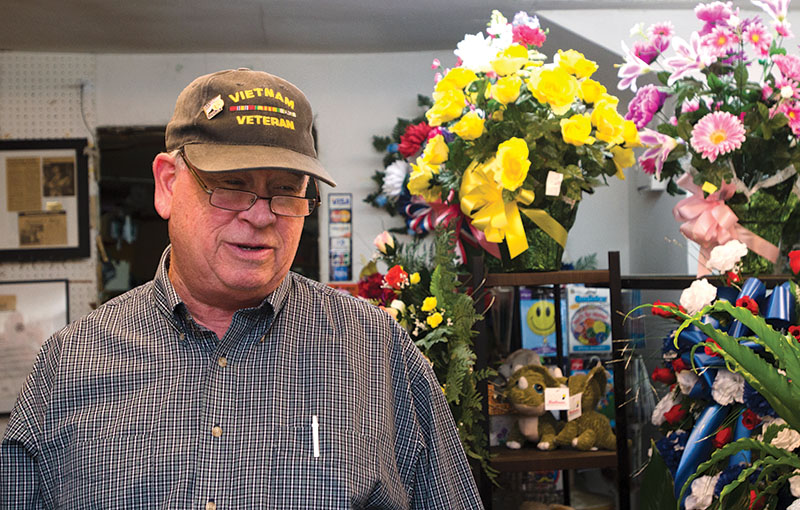 KRISTI CRAVEN/ SALISBURY POST David Harrison stands amongst his flowers at his business, 'Harrison's Florist' on May 31, 2017 in Salisbury.

SALISBURY — During 40-plus years in business for himself, David Harrison has never driven to work.

You don’t have to when your florist’s shop — Harrison’s Florist at 1012 Holmes Ave.— has always been in your backyard. His parents, James T. and Anne W. Harrison, opened this backyard establishment in 1945.

David, their youngest son, took over in 1975. His mother advised against devoting his life to flowers, but James Harrison told his son, “I’m giving you an opportunity — you should take it.”

David Harrison never regretted the move. As many independent florists went out of business over the decades, Harrison relied on good help, personal service, fresh flowers, quick deliveries and hard work to succeed.

He hasn’t had a real vacation in 20 years, Harrison says, but even now, when he takes a day off, he can’t wait to return to the shop.

But Harrison, 68, thinks the time has come to retire, He has placed for-sale signs in front of the old house — now vacant — and outside the florist shop itself.

“Father Time is catching up with me,” he says. “My mind says not to do it. My body says do it.”

Harrison wants to retire by the end of the year, and he hopes a purchaser will want to keep the shop going and also recognize the overall value of  the property. The house and shop are located in what over the years has become a hospital district and physician-heavy neighborhood.

“I would just like to see it continue,” Harrison says.

Meetta Lampert, who first became a customer of the shop in the 1960s when she lived in Forest Hills, still counts on Harrison for whatever flower arrangements she needs. Lampert enjoys chatting with Harrison when she stops by the shop.

“He tells wonderful stories,” she says, “but I’ve never heard him gossip.”

Lampert says she values Harrison’s professionalism, his creativeness with arrangements and his opinions on what she might be looking for.

Many of the customers also enjoy seeing Louie, Harrison’s shop dog, who usually barks a greeting outside, then races through a back door for attention inside. Louie has his own comfy chair in Harrison’s office.

“Since I’ve gotten him, he has taken control of this place,” Harrison complains.

By Harrison’s calculations, this backyard florist shop has easily sold more than a million roses since his parents started in 1945.

His father learned the rose business and about flowers in general by working for John Hanford (Elizabeth Hanford Dole’s father), who had a vast wholesale company in Rowan County that sold to florists throughout the region.

For years, the flowers at Harrison’s Florist came from Hanford, which is now long out of business. David Harrison first started working for his parents as a 15-year-old, when he mostly just swept the shop floor.

He was paying attention, however. One evening, while his parents were attending a Jaycees dinner, David made flower arrangements for funeral orders supposed to go out the next day.

David placed the arrangements in the refrigerator and went to bed. When his parents came home and realized the work he had done, they were impressed. They wakened their son to let him know.

“The next day, they put me to work,” says Harrison, who specialized at first on funeral flower arrangements.

In running his own business after his parents retired, Harrison gives a lot of credit to three women: his aunt, Mary Peeler; Shirley Kepley; and, in more recent years, Judy Kennerly.

His late Aunt Mary was a bookkeeper, receptionist and master designer with a photographic memory, Harrison says. She worked at the shop well into her 80s.

Kepley was another master designer, and Kennerly also seemed to have a natural instinct for flower arranging. “It was just easy for me,” Kennerly says.

Harrison has seen all manner of change. Quality roses have gone, for example, from $7.50 to $70 a dozen. When Harrison’s parents started, Salisbury had 18 independent florists. Now the number is down to three, when you include Harrison’s.

Harrison says he can’t thank his customers enough for supporting him through the years. As with Lampert, many have been loyal, dealing with his shop for years.

“My daddy always told me, ‘You want repeat business,'” he says.

Harrison takes a lot of flower orders over the telephone, but he has a rule: You can’t leave an order by message.

“I want to talk to you personally,” he says, wanting to make sure he gets the order right. “I’ve had a lot of people tell me they like the personal contact.”

Having always lived footsteps away from the shop, either on Holmes Avenue or on Highland Avenue, Harrison has taken many phone orders at his home at night. He says you would be surprised at the number of West Coast calls he has received after normal shop hours.

You should always be ready for rush orders, Harrison adds.

“The flower business is based on last-minute sales,” he says.

Harrison is an Air Force veteran. He served from 1970-74, including a tour in Vietnam. He frequents Richard’s Barbecue and has held a longtime passion for the “Andy Griffith Show” on television.

His old friend in the flower business, the late Margaret Jones, made sure Harrison received the designation as a five-star florist when she was president of the Rowan County Florists Association.

One of Harrison’s favorite stories demonstrates the impact a modest, backyard business can have on its customers.

At a restaurant table close to him one day, Harrison couldn’t help but notice the eatery’s staff clapping and singing happy birthday to an older woman celebrating with her family.

When he finished his meal, Harrison walked up to the woman’s table, handed her his card and told the woman she was welcome to a dozen free roses at Harrison’s Florist.

The lady stopped by the shop to redeem her card the next day. That’s when she told Harrison about something her late husband did for her on every birthday during their 60 years of marriage: He gave her a dozen roses.

Right before Harrison walked up to her table, she had been telling her family it would be the first time in 60 years her husband hadn’t given her birthday roses.

“She told me this was closure for her,” Harrison says. “She felt like an angel directed me to her table.”

Harrison remembers when Jones said her own little flower shop was like “a little bit of heaven” to her. Sitting behind his desk and holding onto Louie, Harrison knows the feeling.