On the road again: Cyclist David Freeze prepares for another long-distance trip 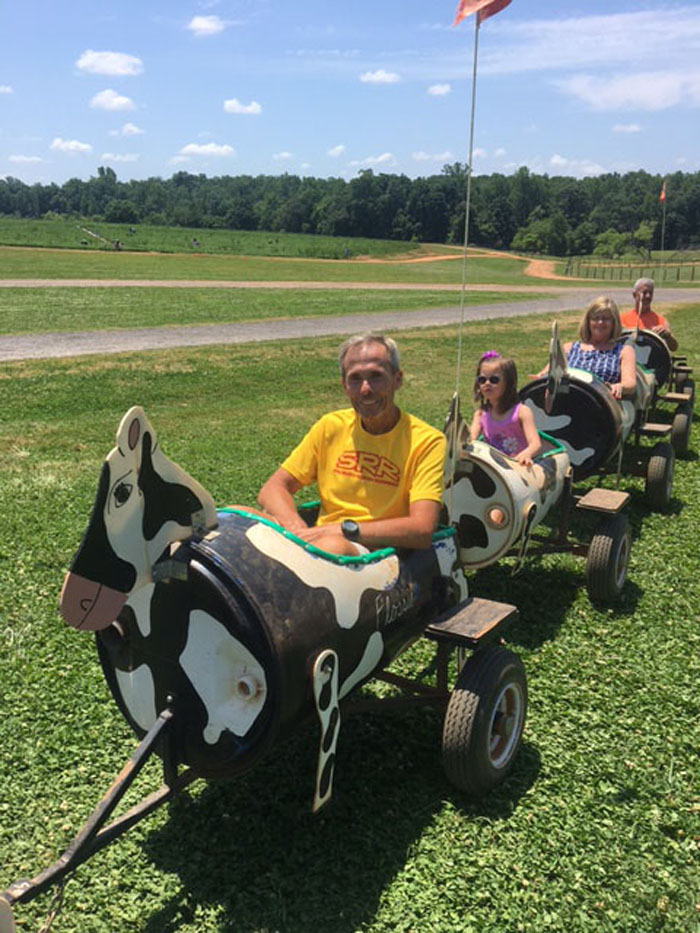 Photo by Michelle Patterson. David says, ‘After waiting for years to get a cow train ride at the Patterson Farm Market, I finally got one. Perfect training for my upcoming cycling journey. Another ride of a lifetime!’

By now, you’ve likely flipped the calendar to June. In these parts, that means David Freeze is preparing to leave on another summer bicycling adventure.

Sure enough, Freeze leaves June 11, this time bound for a trip that’ll take him through the Northern Tier route — albeit with some tweaks along the way. Once again, he’ll invite Post readers along, with daily dispatches set to begin June 13. You might wonder what motivates Freeze to go out summer after summer. Turns out, the longtime cyclist, runner and fitness coach has a plan.

“If this trip goes according to schedule, I’ll have covered 45 states, made two trips into Canada, and covered five great lakes,” says Freeze, who lives in China Grove. “I still need Lake Superior, but I’ll get it at the end of this one.”

Freeze will fly to Seattle, and start this summer’s trek in Washington State at Anacortes on the Skagit River, just 16 miles south of the Canadian border. Pointing his trusty Surly bike east, he plans to travel through Idaho, Montana (with a visit to Glacier National Park), then to Alberta, Canada, and on to North Dakota, South Dakota, Minnesota, Iowa and Wisconsin, with plans to end up near Green Bay.

Freeze expects this trip to encompass between 3,000 and 3,200 miles, and take about six weeks.

He acknowledges that the Northern Tier route doesn’t go into South Dakota, but he wants to see Mount Rushmore and the Crazy Horse Memorial, as well as the Badlands National Park. He wants to try to hit Dyarsville, Iowa, on a Sunday. That’s when actors don vintage baseball costumes, and play at the “Field of Dreams” movie site.

A few days ago, Freeze dropped off his bike at Office Depot for shipping. He’ll pick it up at the Skagit Cycle Center. He says that for the first part of the trip, he’ll need cold weather gear. He may even be rerouted in places if there’s still snow on the road. As in the past, he plans to camp as much as possible.

At the beginning, Freeze expects temperatures of 50 degrees during the day and 40 at night.

Skinny Wheels bike shop has changed some of the gears on Freeze’s bike in anticipation of some steep climbing. He expects some steep hills in Washington, Idaho, Montana and Canada.

“What’s significant is that it will be the steepest climbing I’ve climbed on any of my trips,” Freeze says. “I’ll have one day of moderate riding, then the climbing will start. You’ll have a 4,000-foot climb, then rocket down to the next mountain. That’s a tough way to cycle.”

You might be wondering about the five states still on Freeze’s list. Those would be Vermont — “It was a huge screw-up not to do it before” — along with Nebraska, Nevada, Alaska, and Hawaii.

Of course, Freeze knows he can’t pedal to Hawaii.

He has a plan.

“I want to take a cruise ship, and see if I can talk the cruise line into setting up a bike frame,” he says, “so I can pedal some on the way there and back. I thought I might do that as the 50th state, and make it be really special. I’ve never been, but I don’t have to worry about it ’til I get the rest of them done.”