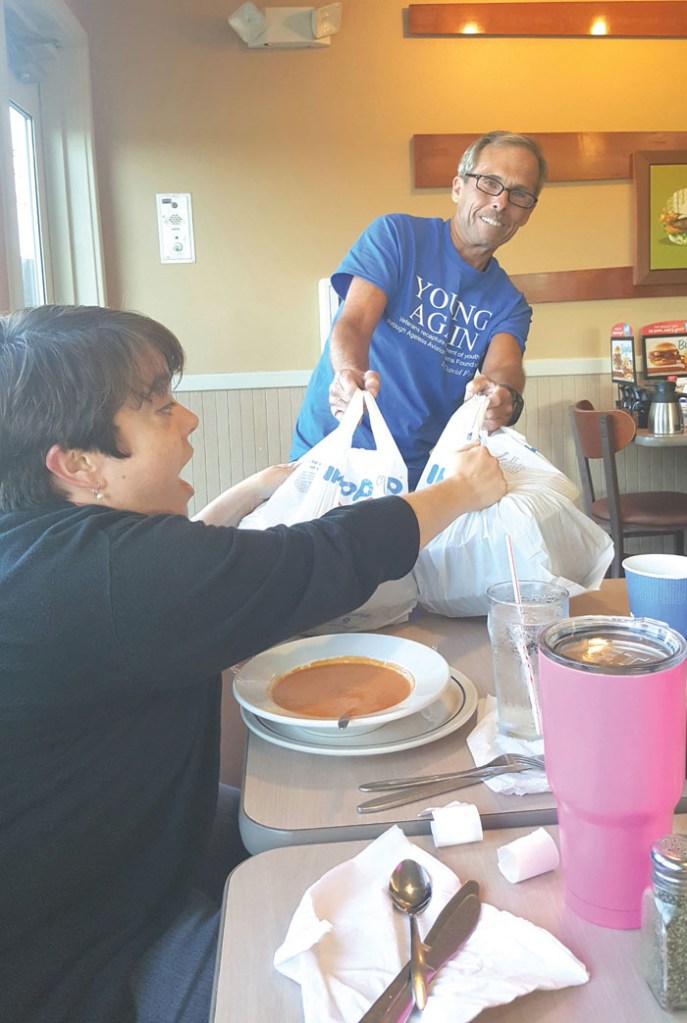 ‘Hand over the pancakes!’ Brooke Taylor has soup at IHOP and David Freeze, who happened upon her, tries to take her two bags of pancakes away. Photo by Laurie Ward

Early on Sunday morning May 7, Brooke Taylor and Vivian Koontz toed the starting line for the first ever Buck Hurley 5K. It was a cool morning and the course was one they had practiced on. Vivian ran her personal best 5K in 29 minutes and 10 seconds, an average of 9:23 per mile. Brooke also had her personal best of 38:03 with an average of 12:15 per mile. Both got medals and plenty of oomph in their fitness quest.

Brooke, circulation supervisor for the Rowan County Public Library, and Vivian, events planner for Salisbury Parks and Recreation, set lofty goals for May. Quietly, I thought they might be too lofty but knew better than to do anything to derail their early success. Vivian had lost less pounds but was improving her fitness at a rapid rate. Brooke was losing pounds quicker and wanted to keep rolling while also gaining cardiovascular fitness. Both were excited that Ester Marsh, fitness director at the Hurley Y, would measure inches lost near the end of the month. Vivian hoped to lose an additional 5-10 pounds and Brooke wanted to drop another eight. Both planned to add in some strength training.

With consistent exercise during May, both made progress. We meet together for running and stretching on Tuesdays and Fridays at the Hurley Y, just before getting an updated weight at the scales in the fitness center. I have cautioned them to only be concerned about the results on this one scale, rather than checking multiple others. Not every day, but most times, they make progress.

On one of these early morning runs, we left out from the Y and took the usual course over behind the Harris Teeter on the way to Brenner Avenue. Just as we passed the back doors of the Harris Teeter store, a man was rolling a shopping cart of boxed pastries toward his truck. Brooke said, “I’ll take some of those.” At the very moment, a box of doughnuts spilled out and came sliding across the pavement toward her feet. Just as she should have, regretfully or not, Brooke didn’t stop to pick them up. Such is the plight of those on a fitness quest. “Do I stop to get the doughnuts or not, or do I just keep running?” A good laugh was shared by all.

Ester has been a huge supporter of all the participants of our public wellness program for the last three years. Vivian met with her first and the results were as expected, with 9 ¼ inches lost overall plus a drop of 8.65 percent fat and a 4 percent increase in muscle mass.

Brooke followed with 17 ¾ inches lost and a decrease of 5.2 percent body fat. Her lean weight did not increase and Ester suggested another reminder to get going on the weights.

Challenges are on the horizon. My bike ride begins at the end of next week so the ladies will be on their own with only email contact for about six weeks. Brooke said, “As we move into summer ice cream season, I have to focus on burning more calories than I take in. I am using my new GPS watch to automatically enter my calories burned into my daily calorie equations with myfitnesspal.”

Building her endurance and running faster is on Vivian’s mind. She said, “I’m happy to be right at the 20 pound mark after five months but I thought I would be farther along. I hope my husband is going to get me a GPS fitness watch for my birthday. He asked about the details the other day. With that watch, I can keep better track of my progress and keep moving forward. I have slacked on my water intake and am sure that is hurting my overall success.”

Brooke and Vivian have formulated their plan to keep up the progress. Vivian said, “Brooke and I put our heads together. We are going to take spin and strength classes together on Tuesday and Friday in place of our regular meetings and then we will run on our own the other days. That will keep us working together and we will hold each other accountable.”

The final tally for the month of May puts Brooke 31.8 pounds down in five months, but just two in May. Vivian has lost 19 pounds so far, four of those in May.

Our next report comes at the end of July when Vivian hopes to be down another 7-10 pounds and running at a 9-minute pace. Brooke wants to make significant progress toward her next goal of 50 pounds lost.

Best of all, Vivian said, “You’ll be blown away by our progress when you get back!” I can’t wait. See you at the end of July.