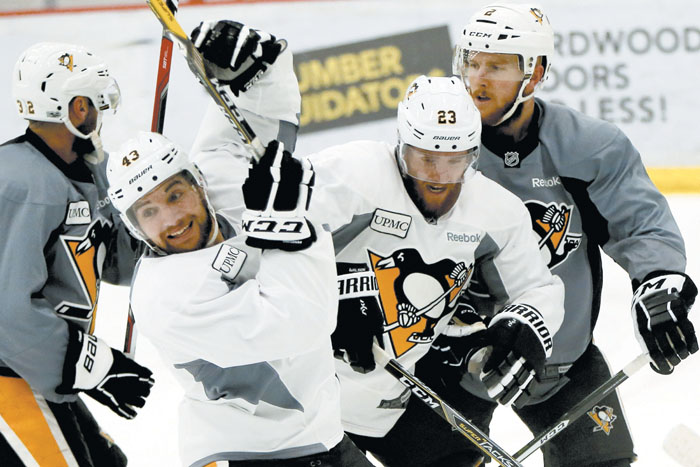 Pittsburgh Penguins' Conor Sheary (43), Scott Wilson (23), Chad Ruhwedel (2), and Mark Streit (32) bang into one another during hockey practice at the team training center in Cranberry, Pa., Butler county, on Friday, June 2, 2017. The Penguins are scheduled to play the Nashville Predators in the third game of NHL Stanley Cup Finals in Nashville on Saturday. (AP Photo/Keith Srakocic)

Time is on the Pittsburgh Penguins’ side, with or without momentum.

Up 2-0 on the Nashville Predators in the Stanley Cup Final, the defending champions have no problem with the schedule that would require 17 days to complete the series if it goes seven games. That’s how the Penguins won the Cup a year ago, following this exact pattern in beating the San Jose Sharks.

“It’s tough to know what it’s all about until you go through it and we were able to go through it last year,” goaltender Matt Murray said. “(You learn about) a lot of little things: How to deal with travel is one of them, how to deal with an opposing building is another one.”

More than anything, the Penguins know how to deal with time off that more resembles a playoff series in the NBA than the NHL. While the NBA Finals would take 18 days to complete if the Golden State Warriors and Cleveland Cavaliers go seven, this Cup Final is an anomaly.

Since the salary-cap era began in 2006, only the 2016 and 2017 Cup Final series have been spread out over more than 15 days. No series in the first three rounds this spring was scheduled for more than 15 days, and all this following a super condensed schedule because of the World Cup and bye weeks that squished an 82-game regular season into 180 days.

Penguins coach Mike Sullivan considers it a benefit because banged-up and tired players get an extra 24 hours to rest. He doesn’t think it does anything for momentum, which a lot of coaches don’t believe in, anyway.

“I’m not sure it’s much different than some of the other series that we’ve been involved with, other than the rest component,” Sullivan said. “My experience of going through these playoff runs in the past has been that each game is its own entity. It seems to take on its own story.”

The story for the Penguins is that they endured seven-game series in the second and third rounds, needing double overtime to beat the Ottawa Senators four days before the start of the Cup Final. The Predators had a week off after eliminating the Anaheim Ducks in six but still stand to benefit from the schedule, which provides two days between games every time there’s travel involved.

“I think it’s good for everybody,” said Nashville goaltender Pekka Rinne, who allowed eight goals on 36 shots in the first two games against Pittsburgh. “At this point of the season it’s June and we’re fortunate to play hockey still. It’s pretty demanding right now, so any day you get to recover and regroup, I think it’s beneficial.”

The extra time off may do little for Predators forward Colin Wilson, who remained off ice Friday because of a lower-body injury. The same goes for Penguins center Nick Bonino, who took a shot from P.K. Subban off the left ankle or foot in Game 2, returned but did not take part in their final full practice before Game 3 Saturday night in Nashville.

Bonino was in a walking boot and getting around on crutches Friday. He’s considered a game-time decision , and center Matt Cullen said: “Bones is a huge part of everything we do. We all hope he’s ready to go, and if not we’re going to have to fill a big hole.”

With almost everyone banged up at this time of year, perhaps it doesn’t hurt either team to have some time off. It’s downright basketball-like , but as NBA commissioner Adam Silver pointed out in his league, “There’s a direct correlation between fatigue and injury on the part of the players.”

So the Penguins and Predators will just have to take the unfamiliar schedule and make the most of it.

“I think just use it to your advantage,” Penguins captain Sidney Crosby said. “You can look at it a couple different ways. You get the rest, which is obvious with the day off. As far as preparing, adjusting, all those little things, you get a chance to practice today, which is kind of rare throughout a playoff series. Usually you’re getting a day off, maybe a morning skate. To actually go through a practice, go through things you want to adjust, that kind of thing, I think that goes a long way, too.”