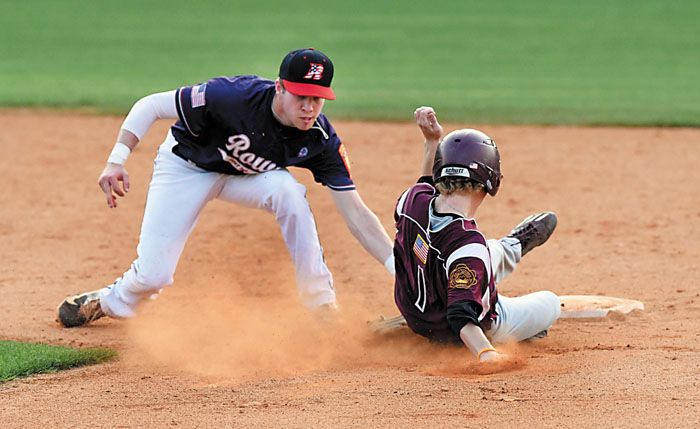 File photo by Wayne Hinshaw, for the Salisbury Post ... Rowan County won at Mooresville Friday night, 6-4, in 11 innings, remaining undefeated for the season.

MOORESVILLE — Rowan County did just about everything the hard way Friday night — including winning in extra innings.

Post 342 manufactured two unearned runs in the top of the 11th and edged host Mooresville, 6-4, in its Southern Division opener.

“We had to grind out every inning and every at-bat to get the win,” infielder John Owen said after Rowan (6-0) rallied from a two-run deficit. “No amount of runs can keep us from coming back.”

“There’s so much chemistry on this team that no one ever gets down,” winning pitcher Griffin Myers said. “We fight right until the end, just like Hendo did running out that last ground ball.”

Rowan, which earlier trailed 2-0 and 3-1, opened the last inning against right-hander Bailey Jones when Owen singled sharply to left-center and took second when the ball was mishandled by Tafton Hensley. He advanced to third on a groundout before Poteat and Trevor Atwood were issued free passes, loading the bases with two away.

That brought up Lentz, a left-handed batter who entered the game as a late defensive replacement. He pounded a ground ball into no-man’s land between Galilland and first-baseman Jaxon Mays. Galilland fielded the ball, hesitated while Jones raced to cover the bag and fired a low throw that eluded everyone.

Myers — Rowan’s fourth pitcher — threw with both bark and bite. He allowed only two infield hits in 4 1/3 innings of scoreless relief, working out of jams in the seventh, eighth, 10th and 11th innings. But before he could shine, right-hander Pearce Wilhelm had to escape a bases-loaded, none-out mess in the bottom of the sixth. Spelling Brett Graham, he fanned Hensley, induced a Hunter Dula flyout and struck out Brady Pope on a 3-2 fastball that caught the outside corner.

“A year ago (Wilhelm) couldn’t be in that situation,” Gantt said. “He’s worked hard to get there. He’s got a little cutter that looks like a fastball and he’s got velocity. It all comes down to decision-making for him.”

Myers retired Mooresville (2-3, 1-1) in order in the last of the ninth before wandering into trouble in the 10th. Post 66 loaded the bases with two out he coaxed Keegan Nimblett into an inning-ending fly ball to center. In the 11th, the Moors put runners at second and third with one man out. That’s when Myers fanned B.J. Lomax with a borderline, 3-2 fastball.

“Russ (Weiker), our pitching coach, came out and told me to put it on the outside corner,” Myers said. “That last one was probably the best pitch I threw all night.”

The game ended on a routine groundout to shortstop Chandler Blackwelder. “The whole time, I was just trying to make them put it in play,” Myers concluded. “I’ve got some of the best people playing behind me.”