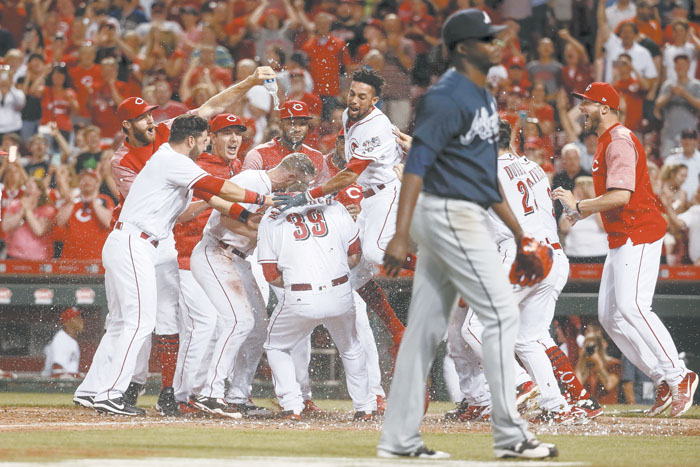 CINCINNATI (AP) — Devin Mesoraco brought an 0-for-15 slump with him to the plate in the 10th inning. He busted out with his first game-ending homer.

Eugenio Suarez scored the tying run in the ninth on Jim Johnson’s wild pitch, and Mesoraco led off the 10th with a homer Friday night, rallying the Cincinnati Reds to a 3-2 victory over the Atlanta Braves.

Mesoraco, who got into the game as a defensive replacement in the 10th, connected off Jose Ramirez (2-2) for his first career game-ending homer . He took extra batting practice earlier in the day, trying to get out of his slump.

“Usually, in those situations, I’m making an out, so it felt pretty good,” Mesoraco said.

Raisel Iglesias (2-0) faced three batters in the top of the 10th inning, leaving the Reds in position to end their three-game losing streak.

“This is one of those unique teams where you’re never out of a ballgame,” manager Bryan Price said. “We talk about that teams like that before every series, and now we’re one of those teams.”

Second baseman Brandon Phillips returned to Great American Ball Park for the first time since his trade in February after 11 seasons in Cincinnati. He got a long ovation before his first at-bat and raised his helmet to recognize the 27,300 fans. Phillips went 0 for 5 with two strikeouts.

Atlanta’s Mike Foltynewicz pitched two-hit ball for seven innings and matched his career high with 10 strikeouts, five of them called by umpire Mike Winters. He turned a 2-0 lead over to the bullpen.

“He was really good, the best one so far,” manager Brian Snitker said. “He was very aggressive. It’s a shame we couldn’t get him the win.”

The Reds tied it against Johnson, who blew a save for the fourth time. Suarez doubled home a run, advanced on a groundout, and scored on Johnson’s wild pitch off the plate and in the dirt with two outs.

“If it’s straight at me, I’ve got a chance,” catcher Tyler Flowers said. “When it’s outside, all you can do is try to pick it. There’s not enough time to get out there.”

Dansby Swanson emerged from his 2-for-26 slump and put the Braves in position to win it. Swanson, batting .185, singled in his first at-bat and set up Ender Inciarte’s sacrifice fly. Swanson led off the fifth inning with a homer down the left-field line off Bronson Arroyo.

Arroyo gave one of the best performances in his long comeback from elbow surgery, allowing two runs in six innings. He has given up a major league-leading 19 homers, 15 of them solos.

Phillips declined to talk to the media before his first game back in Cincinnati and again afterward. The Reds played a tribute to Phillips on the videoboard in the middle of the first inning.

Atlanta’s Matt Kemp had two singles and a double, extending his hitting tear into a new month. He batted .357 in May, third-best in the NL, and had 41 hits.

CHICAGO (AP) — Jason Heyward hit a tiebreaking sacrifice fly in the eighth inning, and the Chicago Cubs snapped a six-game losing streak with a 3-2 victory over the St. Louis Cardinals on Friday.

Heyward also had an RBI double in the sixth and Kris Bryant homered as the Cubs washed away some of the sting from a winless road trip against the Dodgers and Padres. Anthony Rizzo reached four times and scored two runs a day after he got engaged.

MIAMI (AP) — Giancarlo Stanton matched a career high by scoring three times, and his 15th home run of the season put Miami ahead for good as the Marlins topped the Arizona Diamondbacks.

Diaz hit a go-ahead, three-run shot off ineffective reliever Paul Sewald (0-1) during a seven-run sixth inning. The Pirates led 11-7 when New York finally retired the side, a swift reversal after the Mets went up 7-4 with a five-run fifth.

Jonathan Schoop had two hits and scored a run for the Orioles, who have won four of five following a seven-game losing streak.

Vargas (7-3) allowed seven hits over the first six innings but deftly induced double plays in four of them to escape the trouble. The veteran left-hander then set down the Indians in order the rest of the way, making a nifty grab of Carlos Santana’s liner in the ninth to seal it. It was Vargas’ first shutout since a 3-0 victory over Oakland on Aug. 13, 2014.

The Royals scored their first run off Tomlin (3-7) with two outs in the sixth when Lorenzo Cain beat out an infield single — he was initially ruled out, but the call was quickly overturned.

Whit Merrifield extended his hitting streak to 17 games with an RBI double in the seventh, and Mike Moustakas belted his 14th homer.