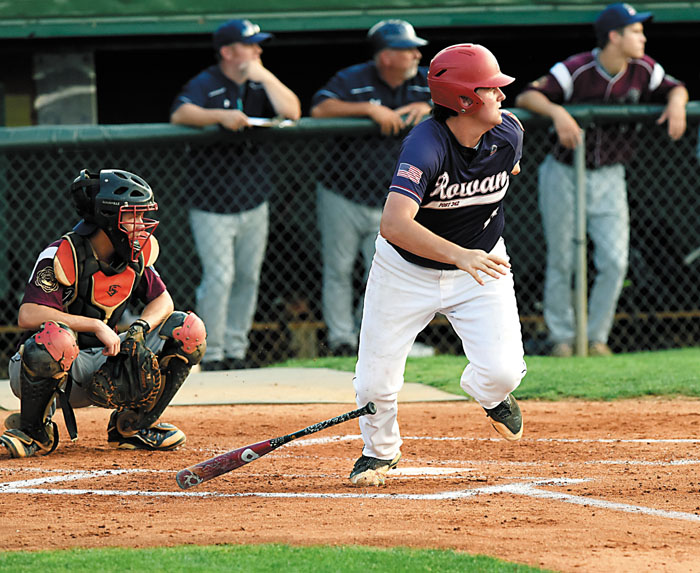 Rowan made it seven wins in a row to open the season with a colossal comeback that included a seven-run eighth inning at Holt-Moffitt Field and beat Davidson County, 13-9.

Rowan has made a habit of coming from behind in the early going since erasing a 6-1 deficit at Kannapolis on opening night.

The difference in the game was Will Brown, an unheralded reliever who shut the door on Davidson in the fourth, fifth, sixth and seventh innings and gave a flattened Rowan squad a chance to scrambled back on its feet and mount a rally.

“The coaches told me in the bullpen that I was going in there in the fourth inning and I needed to command both sides of the plate,” Brown said. “I told them I could do that. I went out there and trusted my teammates and trusted the system.”
A Davidson lineup that includes several Catawba signees put up eight runs in the first three innings. Everything Rowan starter Joe Harrison threw got hit through a hole somewhere. Davidson strung together four straight singles in a five-run third to take an 8-0 lead. Greg Brown, one of those Catawba-bound hitters, had a two-run single to key the inning. Rowan third baseman John Owen made a terrific play on a hot shot or things would’ve gotten worse.

Rowan’s comeback in the non-division game, started with Lee Poteat’s booming triple to right to start the fourth. John Owen’s sac fly got him home, and Rowan was finally on the board.

“We were a little down in the dugout in the early innings,” Brown said. “But once we scored, once we started to get a few hits, we got that feeling that it wasn’t over. There was a long way to go.”

After Brown worked a 1-2-3 bottom of the fourth, Chander Blackwelder’s long double to center keyed the two-run fifth that made it 8-3. Griffin Myers and Poteat knocked in the runs with groundouts. Davidson starter Adam Fore’s night was over after five innings.

When Brown mowed down Davidson County hitters again in the home fifth, Rowan had all the momentum in the world.

“My arm felt great and I have to thank my catchers (Pearce Wilhelm, and then Trevor Atwood) for doing a great job and the defense for making a lot of plays,” Brown said. “I was spotting the ball. The slider and the two-seam fastball were working for me.”

Rowan got three more runs back in the sixth to get within 8-6. Tanner File singled in one and Myers sent a shot up the middle with two outs, one of the pivotal at-bats in the game, to plate two more runs.

Rowan benefited from five walks and four HBP. Most of the wildness from Davidson County hurlers came in the eighth and set up Rowan’s decisive inning. A bases-loaded walk to Poteat brought Rowan within a run at 8-7. Chandler Lippard produced a game-tying sac fly when he lofted a ball to right that was deep enough to get the speedy Blackwelder home from third base.

Brandon Walton delivered the go-ahead hit, a two-run single, for a 10-8 lead, and Rowan just kept adding on after that.

Davidson County finally scored against Brown in the bottom of the eighth after Jed Bryant tripled, but Henderson Lentz got a lefty hitter out to end the eighth, and Owen pitched a 1-2-3 ninth in his first  mound outing of the season.

Owen, Rowan’s ace last summer, has been slowed by tendinitis, but he appears ready to resume a major role on the pitching staff.

“The main thing tonight was we just kept playing as a team,” Brown said. “Not getting down on ourselves, continuing to believe in ourselves when we were down 8-0, that was the key to winning the game.”

Myers drove in three runs, while Poteat knocked in two.  Walton, who also made a nice snag of a liner at first base, accounted for three of Rowan’s nine hits.