Cavaliers, after dunkfest, must slow Warriors at the rim 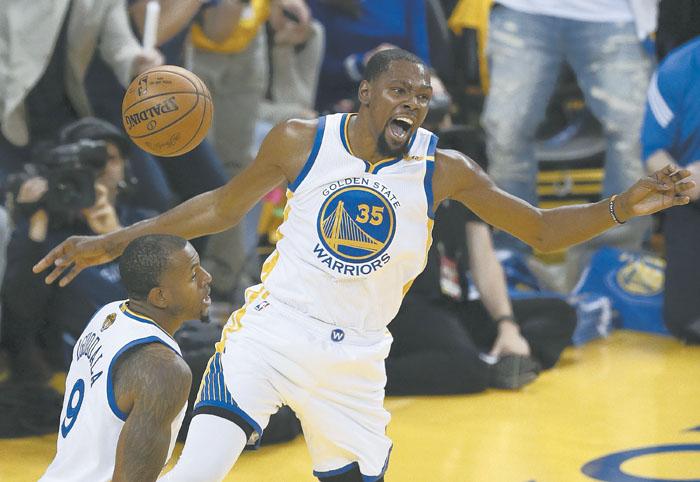 Golden State Warriors forward Kevin Durant (35) reacts after dunking against the Cleveland Cavaliers next to forward Andre Iguodala during the first half of Game 1 of basketball's NBA Finals in Oakland, Calif., Thursday, June 1, 2017. (AP Photo/Ben Margot)

And easy isn’t supposed to happen, especially not at the rim in the NBA Finals.

Forget all the things that Cleveland did wrong offensively in Game 1, the poor shooting and the 20 turnovers and how the bench basically contributed nothing and how Rihanna got — and merited — more commentary from ABC’s Jeff Van Gundy than J.R. Smith and Tristan Thompson did.

The Cavs can score. They’ll likely be better on Sunday night in Game 2. That isn’t the issue.

“I think that’s how Cleveland is going to approach it, make it a physical game,” Michael Cooper, now the coach of the WNBA’s Atlanta Dream who went through some epic Lakers-Celtics battles as a player in the 1980s, said before the series began. “Golden State wants a finesse game.”

And after a team has been blown out in the playoffs, history shows that team typically tries to make a statement in Game 2 that things will be different.

Funny thing is for Cleveland, the Cavs had the answer they needed to just that three months ago in Andrew Bogut. Problem is, they only had him for 58 seconds .

Let’s clear up a misconception: Golden State’s biggest undoing on the way to blowing that 3-1 lead in last season’s NBA Finals was not Draymond Green’s Game 5 suspension for connecting with LeBron James’ midsection.

The Warriors lost that series because Bogut — their best rim protector — got hurt in Game 5 .

And this year, it was Cleveland’s turn to lose Bogut.

He started the year in Dallas, got traded to and ultimately waived by Philadelphia, and signed with Cleveland because the Cavs knew they needed — and wanted — another tough guy who could clog the lane and had playoff experience. And there is no doubt he would have been eager to go against the team that jettisoned him to the Mavericks to make room for Durant.

But Bogut checked into a game against Miami for his Cavs debut, collided with Heat rookie Okaro White, and broke his left leg. Season over. So while he was tweeting Thursday about Santa Claus and Australian Rules Football, Durant was dunking on the sort of nonexistent defense typically seen at an All-Star Game and not the NBA Finals.

Durant had six dunks, all in the first half.

— The first came off a great cut to beat James.

— The second, James got no help after he swiped unsuccessfully at the ball.

— The third, James slipped and again no help came.

— The fourth, Kyrie Irving didn’t stop the ball as Durant sailed past.

— The fifth, Shaun Livingston faked the Cavs out and Durant was left all alone.

— The sixth, Durant drove the lane and Smith ran away to cover Stephen Curry.

“We made a lot of mistakes. They capitalized,” James said. “And we get an opportunity to get a couple days to see what they did and see what we did wrong and how we can be better in Game 2.”

To be fair, playing the Warriors is a slew of pick-your-poison decisions. Overcommit to the lane, and their shooters will tee off from 3-point range. Overplay the perimeter, and the rim is undefended. They’ve won 28 of their last 29 games. They’re 80-15 this season. They could post the second-best record in NBA history when counting the regular season and playoffs, behind only the 1995-96 Bulls.

Today’s NBA isn’t the sort of league where someone is going to clothesline Durant or any other Warrior to send some sort of foolish overly physical message, nor should it be. Though Kevin McHale’s aggressive at-the-rim takedown of Kurt Rambis in the 1984 title matchup remains a quintessential moment in postseason lore (and swung that Celtics-Lakers series totally Boston’s way).

And this series is a long way from over. James has been on the losing end of Game 1 of the Finals seven times in eight tries. He was down 1-0 in all three of the series where he went on to win a ring. Not even a 3-1 deficit last year was enough to faze him.

But someone from Cleveland, maybe many someones, had better find a way to make life tougher for the Warriors going forward starting on Sunday.

Or else a lot more dunks are coming.