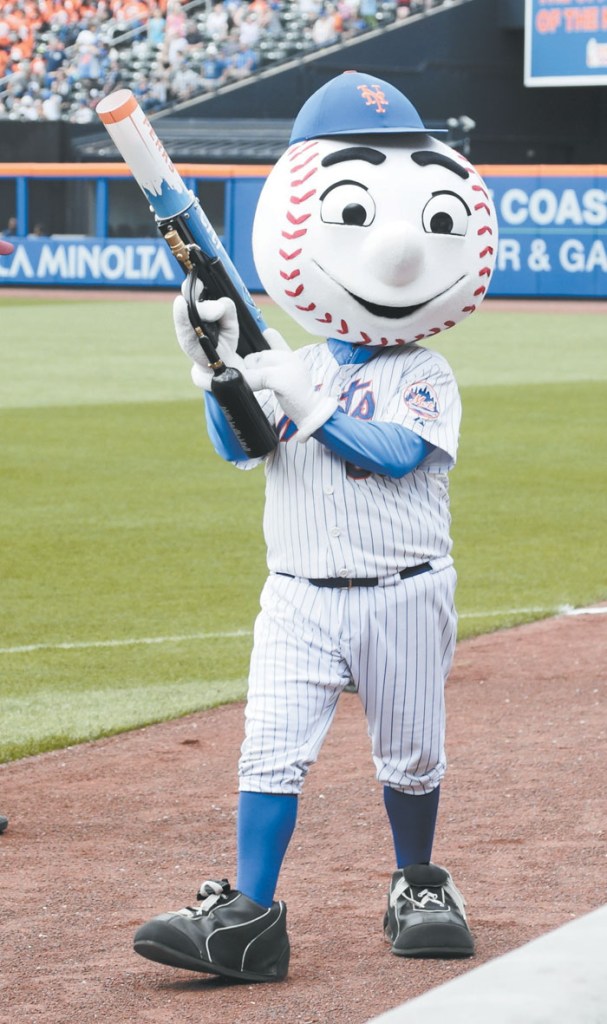 All it took was a lapse in judgment for Mr. Met to gain a big dose of notoriety.

The person in the funny-looking mascot costume of the New York Mets flashed a “middle” finger at a fan during a loss Wednesday night to the Milwaukee Brewers, and after somebody tweeted video of the incident it went viral online. The Mets quickly issued a statement saying the person behind the baseball head would no longer serve in that role.

“Just about every professional baseball position expects the employee to be able to handle a highly stressful environment with a lot of work and very little thanks and very little pay,” Erin Blank, who in her heyday as the Detroit Tigers mascot PAWS was rated as the best mascot in Michigan, said Thursday. “I would have loved to have been the fly on the wall to know what set the poor ball off.

“It can be a very, very rough job,” Blank said. “Obviously, the Mets fans are known for their depth of knowledge of baseball and their unflagging loyalty to the team. I can certainly appreciate the humanity of the mascot in the situation.”

It seems as if those who decide to don the get-up of team mascots often have a tendency to get a little mischievous — and more.

The Mr. Met of Wednesday night might be gone, but he won’t soon be forgotten. And neither will the devilish deeds of mascots before him.

Ted Giannoulas, a.k.a. the San Diego Chicken , was one of the first. His shenanigans often irked players — in 1979 Yankees outfielder Lou Piniella threw his glove and screamed at the cantankerous chicken on the way out to his defensive position during a loss in Seattle — and paved the way for copycats.

The Phillie Phanatic became the Chicken’s incarnation on the East Coast, and his run-in with former Dodgers manager Tommy Lasorda has had a life of its own. It happened in 1988, and 17 years later Lasorda posted “I hate the Phillie Phanatic” on his blog.

In the fall of 2010, Rufus the Bobcat, the mascot of Ohio University, launched a premeditated attack on Ohio State’s Brutus Buckeye in front of 105,075 fans packed inside the Horseshoe. Brandon Hanning said afterward that the only reason he tried out for Rufus was to get the chance to make that tackle. It was his last hurrah as Rufus.

Ohio dominated mascot news that year. Cincinnati’s Bearcat mascot was ticketed for disorderly conduct for his role in a snowball-throwing incident in the stands during a football game against Pitt. He tossed his share of snowballs before knocking a security guard to the ground, was replaced at halftime, and never returned.

NBA star Robin Lopez has had his run-ins, too , and when coach Craig MacTavish of the NHL’s Edmonton Oilers had enough of the antics of Harvey the Hound, the mascot of the rival Calgary Flames, he ripped out the canine’s tongue and tossed it in the stands .

There also have been some nefarious mascots.

During the Pittsburgh drug trials in the mid-1980s, the Pirate Parrot was implicated for buying cocaine and introducing ballplayers to a local drug dealer. In 2004, Chicago Bulls mascot “Da Bull” was arrested for selling marijuana out of the trunk of his car and lost his job. And five years later, the man who once portrayed the New England Patriots mascot, Pat Patriot, was cited for participating in a prostitution ring.

It’s not an easy job, and the daily grind can border on the ridiculous.

“In my final year with the Tigers, the team started off with a 0-12 record, and the mascot was getting voicemails from rotisserie league participants who said that they could manage the team better,” said Blank, now the owner of Keystone Mascots LLC in Pennsylvania. “I’m not quite sure why they were sending it to the mascot because he doesn’t talk. He couldn’t even forward the information.”