Home runs: Once revered stat doesn’t get anyone excited 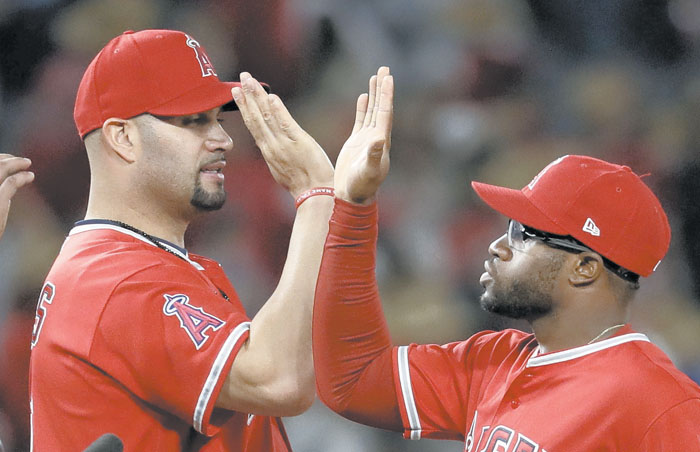 More than any other sport, baseball is a numbers racket.

From 20 wins in a season to 3,000 hits in a career, there are milestones that even the most cursory fan knows are cause for celebration and adoration.

Regrettably, the stat we used to revere above all others no longer gets us in the mood for keeping count.

Albert Pujols is one of the great sluggers in major league history, but his pursuit of 600 homers with the Los Angeles Angels has gone largely unnoticed in recent weeks. Sure, there’s a big countdown sign in center field at the Big A, currently sitting on 599, and many fans broke out their cellphones each time he came to bat Wednesday night in a 2-1 victory over the Atlanta Braves, ready to document history.

Thanks to the steroids era, guys who can knock the ball over the fence with some regularity are no longer held in such lofty esteem. We treat this generation’s version of Hammerin’ Hank and the Sultan of Swat with a collective shrug and a healthy dose of skepticism, even though the game today is dominated by hard-throwing pitchers and could actually use an offensive boost.

No one, it seems, has forgotten when juiced-up guys made a mockery of the game.

So, when Pujols hits No. 600, there will be a small celebration.

“It’s incredible, I think, just to put it in the context,” Angels manager Mike Scioscia said. “The guys that hit 300 home runs, that’s like 10 years of hitting 30 home runs. And to double that, it just defines … the elite players that have been in the batter’s box throughout this game.”

Indeed, Pujols will become just the ninth player in major league history to reach 600 homers and, in all likelihood, be a first-ballot inductee into Cooperstown.

But it’s worth noting that Pujols will be the sixth member of that exclusive club whose career touched on the steroid era, which runs roughly through the 1990s until the mid-2000s when baseball finally adopted a doping policy that had a little bite to it (though still not nearly enough).

Of the other five, only Ken Griffey Jr. is in the Hall of Fame. The career leader, Barry Bonds with 762, has yet to be voted in because of his links to doping scandals, though the ill feelings against his candidacy seem to be waning. Alex Rodriguez, who copped to doping and served a lengthy suspension near the end of his career, faces an uphill battle when he finally becomes eligible for the Hall consideration despite going deep 696 times. Sammy Sosa has no chance of getting in with 609 homers, his lofty numbers also viewed as highly suspicious by the voters.

Jim Thome (612) will be on the ballot for 2018 and might have a shot as a first-year inductee since he was never suspected of drug use. But just the fact that his candidacy isn’t a no-brainer shows how the stature of the home run has fallen.

It wasn’t this way before the steroids era.

Forget 600 homers. Being a member of the 500 club used to be a sure-fire ticket into the Hall. The first 15 players to reach that landmark were all voted in — 12 on their first try. A dozen more players have joined the list in recent years, and eight have been on the Cooperstown ballot.

Joining Bonds and Sosa on the outside are Mark McGwire (583), Rafael Palmeiro (569), Manny Ramirez (555) and Gary Sheffield (509). McGwire — an acknowledged doper — didn’t come close to receiving the required 75 percent in his 10 years on the ballot. Palmeiro — who was suspended for a failed test — dropped out of consideration after only four years because of a lack of support. Two other tainted players, Ramirez and Sheffield, seem unlikely to get into Cooperstown based on their early voting totals.

Which brings us back to Pujols.

He simply wants to slip in the back door of the 600 club before anyone notices.

“I don’t play here for numbers,” he said. “I’m aware of the history, don’t get me wrong. I respect it. But I think that’s kind of a distraction that I don’t want to bring into the game for me.”

Pujols shouldn’t have to worry.

It’s hard to find anyone making a big deal about the long ball.