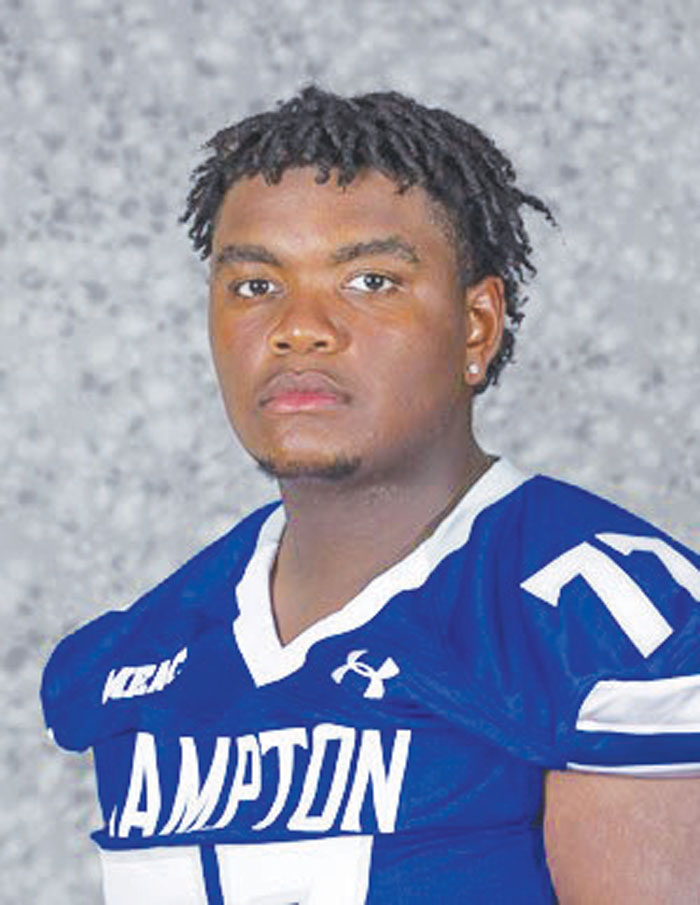 MOUNT ULLA — The redshirt year most Division I college football players endure can be the most challenging time of their lives.

There’s no game action on Saturdays and no cheering crowds. Just numbing hours of practice, endless meetings and exhausting weightlifting sessions. Lots of tough love. There’s some getting yelled at.

It even hurts to watch the NFL on TV because the dream seems more distant than it ever did in high school.

On top of that, schoolwork has gotten much tougher and family support is often far away. Sometimes it’s limited to “We love you, hang in there” text messages.

Former West Rowan offensive tackle Keldrick “K.J.” Wilson goes to school 300 miles and five hours from home at Hampton University in the Tidewater area of Virginia. But he’s survived that redshirt freshman year with the Pirates, and now things are looking up.

“During the fall and again during our spring practice, I was getting up at 5 a.m. and making a long walk to the field to be there at 5:45,” Wilson said. “That first hit you take at 6 a.m., that really wakes you up. That’s a hard way to wake up.”

It was during spring practice in March that Wilson, who is nearly 6-foot-6 and weighs 285 pounds, started seeing tangible evidence that he’s making progress, that he’s been noticed by the coaching staff, that his time will come.

College football rosters are at their thinnest in the spring. The incoming freshmen recruits haven’t arrived yet, while most of the seniors have completed their football eligibility.

“We graduated two senior offensive linemen and two more linemen were out with injuries this spring,” Wilson said. “So I had a great opportunity to shine all spring and did very well. I was getting practice reps with the first team and I started in our Blue-White spring game.”

Wilson got experience at left and right tackle, versatility that should help  him as he competes to stay on the first team on the depth chart this fall.

“Hopefully, we’ll have everyone healthy this fall,” Wilson said. “But the coaches tell me to keep working the way  that I have been and I’ll have a chance to start.”

The son of former Livingstone football player, Broderick Wilson, who played on those strong Rudy Abrams-coached Blue Bear teams in the 1990s, Wilson says he’s made adjustments to demanding courses and had a good spring semester in the classroom. He plans to major in criminal justice, as his father did.

“One of the best things about Hampton has been meeting people in my classes from all over the country,” Wilson said.

The 2017 season is going to be exciting for Wilson and Hampton. For one thing, the school will be celebrating its 150th anniversary.

The opening game will be a challenge — a road trip to face the Ohio University Bobcats on Sept. 2.

On Sept. 16, Division II Livingstone will be making a long ride to Hampton. That’s one Wilson is looking forward to for obvious reasons.

The game against Howard that will conclude the regular season is always a monster game for Hampton’s alumni. Both prestigious HBCU universities will be out to prove they are the real HU.

But the two circle-on-the-calendar games for Wilson are the Mid-Eastern Athletic Conference battles against South Carolina State and North Carolina Central on back-to-back weeks in November.

“Those are the two rivalry games for me,” Wilson said.

Wilson was a bit of a late-bloomer at West, and for a while his future actually appeared to be on the basketball court.

But he played his best football late in his senior year against the fiercest competition. His two strongest outings were against Concord and South Point, and by the end of that season he was being recruited by a lot of schools, including South Carolina State.

Wilson is home with his family now, but only for a few weeks. On June 10, he’ll report to Hampton to get an early start on a potential breakout season.

That redshirt year is behind him. Brighter days are ahead.