Penguins go up 2-0 in Stanley Cup 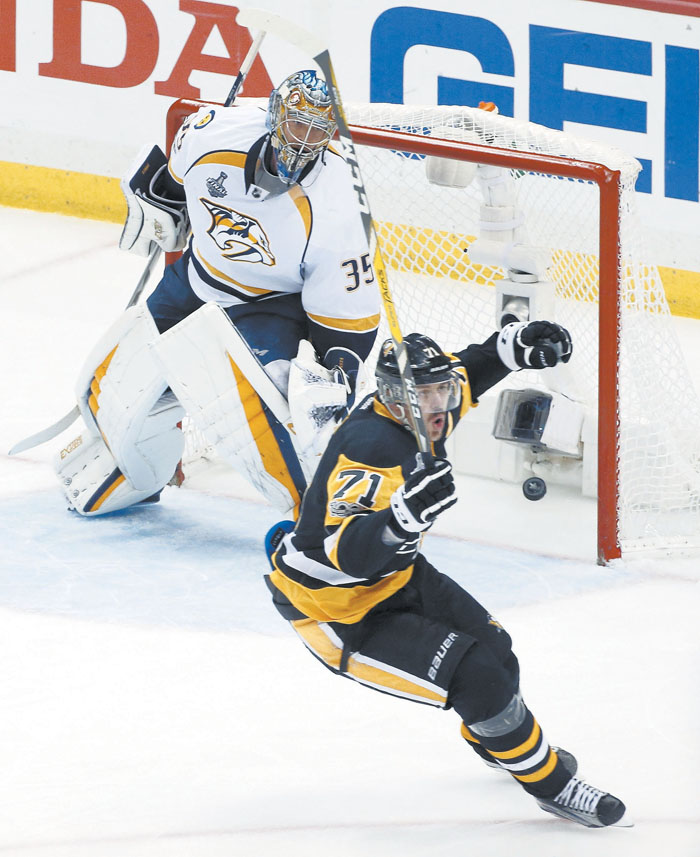 Too busy for Rinne and the rest of the Nashville Predators to keep up with the surging defending Stanley Cup champions.

Jake Guentzel, Scott Wilson and Evgeni Malkin scored 3:18 apart early in the third period as the Penguins chased Rinne and pulled away for a 4-1 victory in Game 2 of the Stanley Cup Final on Wednesday night. The Penguins lead the best-of-seven series 2-0. Game 3 is Saturday night in Nashville in what amounts to a last stand for the Predators and their suddenly very average-looking goalie.

The 22-year-old Guentzel finished with two goals to give him an NHL-high 12 during the playoffs, the second-most by a rookie in postseason history. His 19 playoff points are the most by an American-born first-year player and he’ll have at least two more cracks at adding to that total.

If the Predators don’t get it together back home in “Smashville,” it might only be two.

Matt Murray played spectacularly at times through the first two periods, buying his teammates enough time to find their footing and get to Rinne. Murray finished with 37 saves in all as he helped move the Penguins to within two victories of becoming the first team to go back-to-back since the Detroit Red Wings in 1998.

Pontus Aberg scored the lone goal for the Predators, who were once again undone by a sudden barrage from the NHL’s highest-scoring team.

In Game 1, the Penguins pushed three goals by Rinne in a span of 4:11 in the first period to build a 3-0 lead. The Predators rallied to tie before Guentzel’s go-ahead goal with 3:17 remaining put the Penguins ahead to stay.

This time, Pittsburgh’s flurry came a little bit later. And it was once again led by the baby-faced son of a coach who has no problem shouldering the responsibility of playing alongside star Sidney Crosby.

The game was tied at 1 at the start of the third period when Guentzel jumped on a rebound 10 seconds into the period to put Pittsburgh ahead. Wilson was credited with his third of the playoffs just over 3 minutes later when a centering pass caromed off Nashville’s Vernon Fiddler and by Rinne.

Malkin added his ninth of the playoffs and second of the series just 15 seconds later and Rinne was skating to the bench in favor of backup Juuse Saros after stopping 21 of 25 shots. Rinne fell to 0-5-0 in five career starts in Pittsburgh and he has never beaten the Penguins anywhere as a starter.

The Penguins vowed to put more pressure on Rinne than they managed in their 5-3 victory in Game 1, a win they managed despite going 37 minutes without throwing a single puck Rinne’s way and none in the second period, the first time that’s happened since the NHL started tracking shots in 1957.

The Penguins matched their entire shot total from the opener (12) by the end of the first period but still found themselves trying to keep up with the Predators. The Stanley Cup newbies were disappointed but not dismayed by their Game 1 loss, pointing to the way they carried play for long stretches as tangible proof they weren’t just happy to be here.

The result was the kind of up-and-down play that showcased the speed on both sides and included more than a dash of antagonism, particularly early.

The Penguins, as they’ve done when pressed throughout the postseason, responded almost immediately.

Guentzel, who snapped an eight-game goalless drought when he pumped the winner by Rinne with 3:17 left in the series opener, tied it later in the period. The 5-foot-11 rookie planted himself at the post and jabbed a backhand rebound to tie it.

Pittsburgh stayed in it thanks to Murray and when Pittsburgh returned to the ice for the start of the third they, as coach Mike Sullivan is fond of saying, “got to their game.”

A style that now has the Penguins two victories away from history.