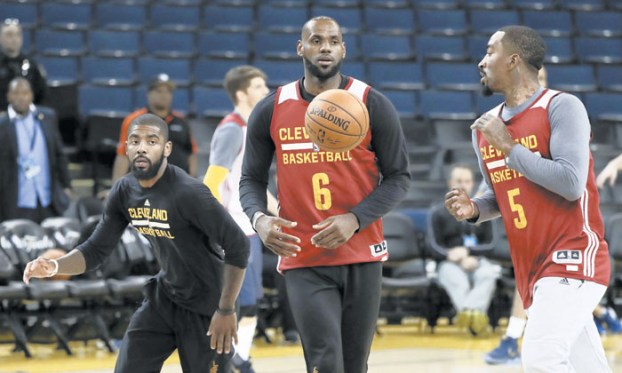 From left, Cleveland Cavaliers' Kyrie Irving, LeBron James and J.R. Smith work on drills during an NBA basketball practice, Wednesday, May 31, 2017, in Oakland, Calif. The Cavaliers face the Golden State Warriors in Game 1 of the NBA Finals on Thursday in Oakland. (AP Photo/Marcio Jose Sanchez)

Why will the Cleveland Cavaliers beat the Golden State Warriors in the three-match of the NBA Finals?

“I feel good about our chances,” LeBron James said this week. “Very good.”

Often times the simplest answer is the right one.

At 32 years of age, the best player of his generation is playing the best basketball of his life. And if he feels confident going into a series against an overpowering Warriors team filled with four All-Stars, then the rest of Cleveland should, too.

James has reached a rarefied air this postseason, surpassing Michael Jordan on the career playoff scoring list while leading Cavs through an Eastern Conference that looked more overmatched than ever. He is playing in his seventh straight finals. This is home to him and there is no amount of hype, no limit to the number of All-Stars his opponent can have that will shake his resolve.

The Cavs are also more well-rounded than they were in the previous two trips to the finals.

Kevin Love sat out the 2015 finals with a shoulder injury and was more of a blue-collar, dirty work player in last year’s conquest. He returns this year more closely resembling the stat-stuffing machine he was in Minnesota than at any other time since he was traded following James’ decision to come back to Cleveland. Love is averaging 17.2 points and 10.2 rebounds this postseason and shooting 47.5 percent from 3-point range, giving the Cavs a floor spacer that is also a terror on the glass who may be able to exploit the Warriors when they go to a smaller lineup with Draymond Green at the center.

Kyrie Irving has also reached a higher plane these playoffs, even after last season’s remarkable performance late in the series to help the Cavs rally from a 3-1 deficit. He scored 42 in an important Game 4 victory over the Boston Celtics in the Eastern Conference finals and can stand up to any of Golden State’s perimeter players from a scoring and finishing standpoint.

Then there is the X-factor: Tristan Thompson. Cleveland’s rugged glass-eater could be a difficult matchup for the Warriors. If he can control the paint and create second chances for the Cavs offense while limiting Golden State on its possessions, the Cavaliers will have a chance to hang close in most games.

Add to that mix veterans like Deron Williams, Channing Frye, Kyle Korver and J.R. Smith and the Cavs are one of the few teams in the league that have the firepower to stay with the Warriors.

“You can look at Golden State and how they’re playing, it’s pretty dominant,” Minnesota Timberwolves coach Tom Thibodeau said on Tuesday. “But you can never bet against LeBron. If a game is close down the stretch, he can take it over.”