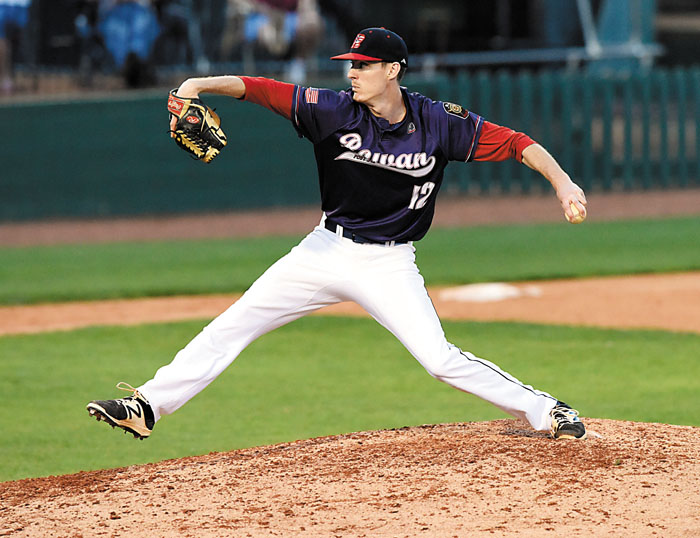 SALISBURY — Unbeaten Rowan County didn’t earn any style points Thursday night at Newman Park, but it did rally for its fifth consecutive victory.

Rowan scored seven runs in the last of the eighth inning — all with two men out — and surged past visiting Randolph County, 14-10.

“One good thing about tonight is that the guys didn’t give up,” coach Jim Gantt said after Rowan overcame deficits of 5-1 and 10-7. “No matter what happened in the game, the grand slam and all that stuff, they kept fighting back. We always seemed to have an answer when they had their big innings.”

Randolph (5-6), which scored 19 runs in a win against Kannapolis on Wednesday, jumped on Rowan starting pitcher Olen Stamper for five runs in the top of the fourth. Four crossed on a towering home run by infielder Dawson Painter that crashed off the top of the new scoreboard in left field. Teammate Cameron Morrison — a reserve catcher for Catawba this past season — followed with a home run that cleared the fence in left. First-baseman Bryce Marsh chased Stamper when he conked a two-out double off the right-field wall.

“It’s one thing to score all those runs,” said Randolph coach Ronnie Pugh. “But what does it mean if you don’t come out and have a shutdown inning right after it? We needed to bear down and get three outs, then come in and try to add to the lead. We weren’t able to do that.”

Instead, Rowan answered with a four-run fourth and tied the score when No. 9 hitter Bryson Wagner grounded a two-out, run-scoring single into center field. Chandler Lippard and Will Brown also delivered RBI-singles.

“Anything is possible,” Lippard said, after knocking in four runs. “We all do what we can do.”

Gantt used four pitchers — with Carson sophomore Luke Barringer, lefty Joe Harrison and southpaw Henderson Lentz following Stamper. Barringer worked out of trouble in the fourth inning before yielding Dalton Hammer’s two-run double in the fifth. A double play — Rowan’s second of the game — helped his escape in the sixth and he struck out two batters in the seventh.

“Barringer did a good job,” Gantt said. “He doesn’t have any secondary pitches that he has command of, but when he stays on top of the ball he has good sink on his fastball.”

Harrison picked up his second win against Randolph this week, despite allowing three runs — two of them unearned — in one inning. Lentz worked a 1-2-3 ninth and struck out two.

“Lenz was the last guy we had available,” Gantt said. “I’m glad we won it in regulation. He was good. When you throw strikes and change speeds, you get people out.

Rowan was three runs down when it opened the last of the eighth against Randolph right-hander Ryan Hill. But when Tanner File (infield hit), Chandler Blackwelder (single to left) and Brett Graham (hit by pitch) reached to load the bases with two away, Pugh summoned Painter to secure the third out. Seven runs later, he induced Blackwelder’s inning-ending groundout.

“It was kind of like a basketball game — a game of runs,” said Lentz. “Each team had its big inning. But our team, one-through-19, we all can play. There’s really no wrong decision to make.”

The game’s decisive hit was delivered by Lippard, who served a two-run double down the left-field line that put Rowan ahead, 11-10. “I knew I needed a base hit,” he said. “And the pitch jammed me inside. It helped that they weren’t playing the line.”

Lenz followed with a two-run double to left, a line drive that outfielder Evan Walls nearly snagged. “I hit almost in the exact same spot as Chandler’s,” Lentz said. “Down 0-2 (in the count), I was just trying to fight off the pitch and it found some grass.”

And with it, Rowan found its fifth triumph.

“They’re going to get a lot better,” said Pugh. “You haven’t seen their best baseball yet.”

NOTES: Rowan opens its Southern Division season tonight at Mooresville. Gantt said lefty Hayden Setzer will start for the locals. … Rowan collected 14 hits, including two each by Blackwelder, Brandon Walton, Lippard, Wilhelm and Wagner. … Morrison batted .188 with no home runs in 20 games for Catawba this spring.