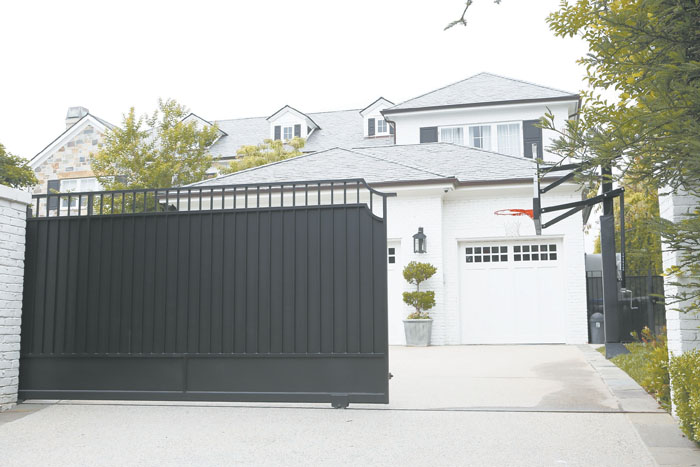 The front gate of a home belonging to Cleveland Cavaliers' LeBron James is freshly repainted Wednesday, May 31, 201, in Los Angeles. Police are investigating after someone spray painted a racial slur on the front gate of James' home in Los Angeles on the eve of the NBA Finals. (AP Photo/Damian Dovarganes)

OAKLAND, Calif. (AP) — LeBron James wanted to be with his family, to hug his wife and three kids back in Ohio.

Visibly shaken by an event he couldn’t control, Cleveland’s star struggled Wednesday to focus on his seventh straight NBA Finals or the Golden State Warriors.

For the game’s best player, basketball was overshadowed by racism.

On the eve of the Cavaliers and Warriors meeting for the third straight year, police said James’ mansion in Los Angeles was vandalized in the morning with a racial slur spray painted onto the front gate.

Nearly a year since he sat at the same podium inside Oracle Arena and addressed Muhammad Ali’s impact as an activist following the heavyweight champion’s death, James discussed the daily challenges of being black in the U.S.

“No matter how much money you have, no matter how famous you are, no matter how many people admire you, being black in America is tough,” James said. “We have a long way to go for us as a society and for us as African-Americans until we feel equal in America. But my family is safe, and that’s what’s important.”

According to police, an unidentified person spray painted the N-word on the front gate of James’ $20 million home in the Brentwood neighborhood Wednesday morning. Capt. Patricia Sandoval, a spokeswoman for the Los Angeles Police Department, said neither James nor his family was in their secondary home at the time.

The property manager told officers that it is believed the incident was captured on surveillance video, Sandoval said. Police are investigating it as an act of vandalism and a possible hate crime. Someone painted over the slur before officers arrived to investigate, Sandoval said.

The 9,440-square-foot home is not James’ primary residence. He lives in Bath, Ohio.

As he and the Cavaliers got ready to face the Warriors in Game 1 on Thursday night, James was handling a topic normally discussed in other forums.

“As I sit here on the eve of one of the greatest sporting events that we have in sports, you know, race and what’s going on comes again, and on my behalf and my family’s behalf. But I mean I look at it as, if this is to shed a light and continuing to keep the conversation going on my behalf then I’m OK with it,” James said. “My family is safe, they’re safe and that’s the most important. But it just goes to show that racism will always be a part of the world, a part of America. You know hate in America, especially for African-Americans, is living every day.”

It was difficult for James to think that he won’t be home with his family until next week and he said he would settle instead for a FaceTime call, saying, “It’s kind of killing me right now.” He thanked his wife, Savannah, and other family member for handling some tough conversations to come once his two sons, Bronny and Bryce, got home from school.

Getting ready for Game 1 had already become a more daunting task with what happened.

“I’m at a point in my life where my priorities are in place,” James said. “Basketball comes second to my family. It actually comes after me continuing to be a role model to the youth and what I do as far as with my foundation. … I will be as focused as I can be on the job at hand tomorrow, but this is a situation where it puts me back in place of what’s actually more important. And basketball is not the most important thing in my life.”