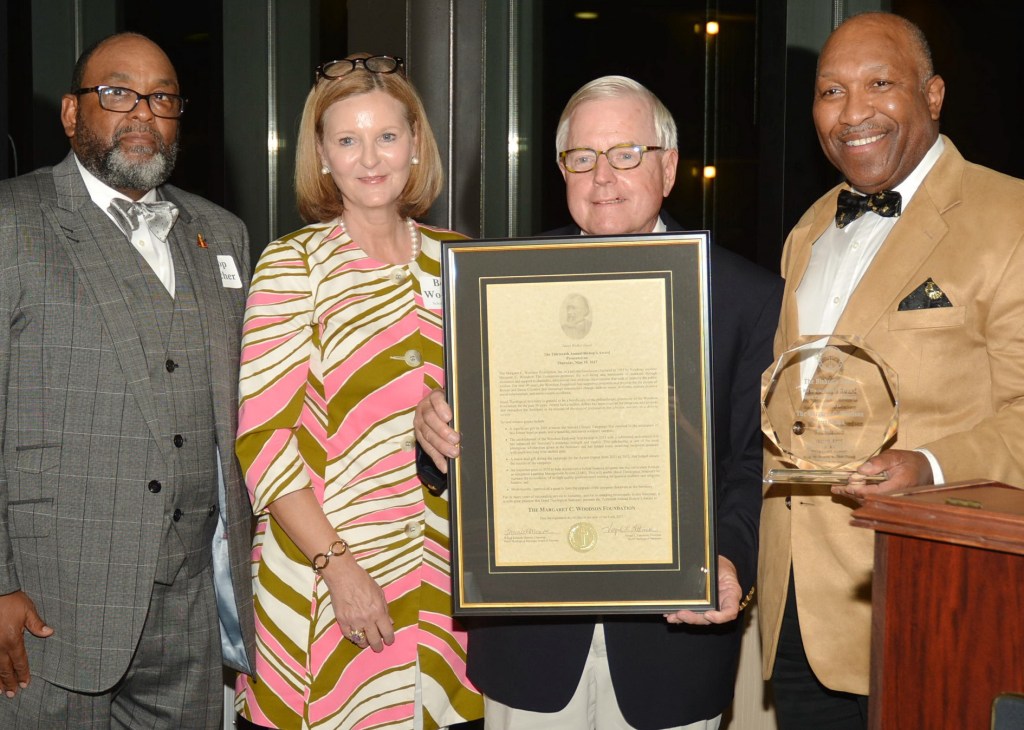 “This event is held to recognize and thank those donors whose support reaffirms Hood’s unique investment in the future of the church and society,” said Hood President Vergel Lattimore.

For the first time, Hood scholarship recipients were invited to meet the donors who fund their scholarships.

The highlight of the evening was the presentation of the Bishop James Walker Hood Awards for Distinguished Service. This is the highest honor Hood Seminary bestows on donors, leaders and supporters.

Lattimore thanked this year’s recipients for their generous financial support and contributions of time and talent to the mission of Hood seminary.

Williams is a retired physician whose association with the seminary began years ago when he and then-President Albert Aymer became acquainted at First Presbyterian Church, where Aymer was teaching a class. Since then, Williams’ enthusiasm and support for the seminary have been unwavering and reflect a broad range of talents from craftsman to teacher to adviser.

He is a skilled wood carver and offered to carve symbols for the seminary, as he had done for his church. He designed and carved 39 pieces depicting Christian symbols that now grace the walls of the administration building. Williams also designed and carved the ceremonial mace that is used each year at commencement.

As the son of a Presbyterian minister, Williams has a special understanding of the value of theological education. For many years, he has given of his time and knowledge by taking the students in Mary Love’s Christian symbols class on a tour through the building to explore the symbolism depicted in his carvings and on the mace.

His bond with Hood has been strengthened through his membership on the President’s Advisory Council. For more than 10 years in this capacity, he has partnered with Hood to promote excellence and growth in Christian ministry.

In 2016, Williams established the Dr. Trevor Williams Endowed Scholarship to be awarded to a student who demonstrates promise in the fields of preaching, homiletics or worship leadership.

Williams, accompanied by his wife, Gail Hounshell, received the award presented by Bishop Michael Frencher Sr., vice chairman of the seminary board of trustees, and President Lattimore.

The Margaret C. Woodson Foundation is a private foundation chartered in 1955 by Salisbury resident Margaret C. Woodson. The foundation promotes the well-being and betterment of mankind through assistance to charitable, educational and religious organizations that seek to improve the public welfare. For over 60 years, the Woodson Foundation has supported programs and projects for the people of Rowan and Davie counties that encourage constructive change, address social problems, nurture positive social relationships and strive toward excellence.

Hood Theological Seminary has been a beneficiary of the philanthropic generosity of the Woodson Foundation for the past 20 years. Nearly half a million dollars has been received for programs and projects that strengthen the seminary in its mission of theological preparation for effective ministry in a diverse society.

Some notable grants include a gift in 2005 to the Second Century Campaign that resulted in the adaptation of the former Days Inn hotel property into a seminary campus; the establishment of the Woodson Endowed Scholarship in 2011 that has enhanced the seminary’s academic strength and helped recipients graduate with much less long-term student debt; a major lead gift during the campaign for the Aymer Center from 2011 to 2013 that helped ensure the success of the campaign; and a grant in 2016 to help incorporate a hybrid learning program into the curriculum through an integrated learning management system. This will enable Hood Theological Seminary to increase the accessibility of its graduate-level training for pastoral students and religious leaders.

Paul Woodson received the award on behalf of the Woodson Foundation.

Hood Theological Seminary, at 1810 Lutheran Synod Drive, is a graduate and professional school where intellectual discourse and ministerial preparation work in tandem within the framework of a community of faith. Accredited by the Association of Theological Schools in the United States and Canada, the seminary is approved by the University Senate of the United Methodist Church and is the only seminary in the United States sponsored by the AME Zion Church.

Its student body and faculty are multidenominational.