Why the Warriors will win the NBA Finals 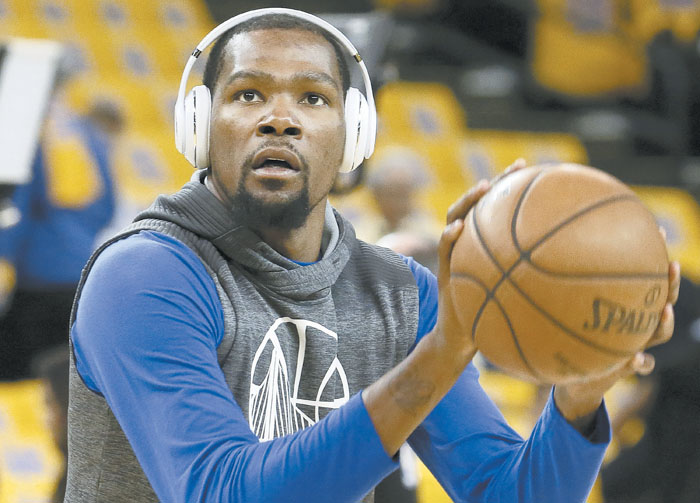 In this Sunday, May 14, 2017, photo, Golden State Warriors forward Kevin Durant warms up before Game 1 of the NBA basketball Western Conference finals between the Warriors and the San Antonio Spurs in Oakland, Calif. Imagine Kevin Durant as a skinny, timid teen being told to shoot by his middle school point guard who saw so much potential all those years ago. San Francisco 49ers linebacker NaVorro Bowman, the superior player at the time, used to tell tall-and-lanky Durant to be aggressive, to take it to the hoop. "Can you believe we had to tell him to shoot?" Bowman recalled with a grin. (AP Photo/Jeff Chiu)

There is a way to beat Golden State.

Defense has been the question for the Cavaliers all season.

That is why Golden State is my pick to win the NBA championship.

For the record, I picked Cleveland at the start of the season primarily for two reasons. One, James is the best player alive and his entire motivation now seems to revolve around collecting more rings. Two, I wasn’t convinced that adding Kevin Durant to the Warriors’ loaded mix would be as seamless as Golden State has made it look.

James has probably never been better than he is now.

But with Durant, the Warriors have probably never been better than this either.

Let’s get back to those numbers. When the Warriors score 103 this season, they’re 78-6. When they score 102 or less, they’re 1-9. (That ratio also holds true going back to last year’s Finals, Golden State going 3-0 when scoring 103 or more, 0-4 otherwise.) And the last time that the Warriors shot better than 50 percent and lost was in November — that is, November 2014.

When shooting over 50 percent, they’ve won 106 consecutive games, the last 43 of those coming this season.

The argument from CavsTwitter upon hearing those numbers will likely revolve around how Cleveland has clamped down on Golden State in each of the past two Finals, and that take is accurate. Golden State shot 44 percent against the Cavs in the 2015 Finals, 43 percent last season. Clearly, Cleveland understands what it takes to frustrate the Warriors just enough.

And even though Cleveland has rolled through the playoffs, going 12-1, they’ve allowed opponents over 100 points in all but three of those games.

Durant is the difference. Stephen Curry, Klay Thompson and Draymond Green were daunting enough with Harrison Barnes. Now with Durant in that mix in what essentially was Barnes’ spot, the Warriors have found different dimensions both offensively and defensively. Barnes averaged 9.3 points in the Finals a season ago, on 35 percent shooting. There’s no way Durant will get held to those sort of numbers.

The Warriors have dealt with adversity — particularly Durant’s knee injury and coach Steve Kerr’s absence caused by his ongoing back problems. They know the pain that comes with losing a Finals, particularly one where a 3-1 series lead gets wasted. Durant has heard so much criticism for leaving Oklahoma City and moving to Golden State last summer.

James will push Golden State to the limit. But in the end, the 2016 loss will be avenged and the championship confetti will finally fall on Durant.

Tomorrow: Why the Cavaliers will win the NBA Finals.

Tim Reynolds is a national basketball writer for The Associated Press.

Column: For Tiger Woods, one picture says it all…