Panthers’ Jonathan Stewart concerned about Super Bowls, not his own carries 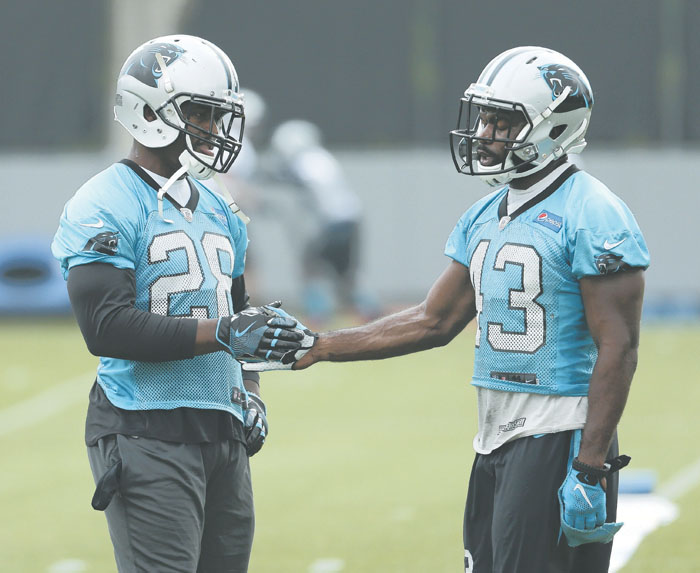 In Stewart’s eyes, the more talent on the Carolina roster the better.

“Who cares? We want to win Super Bowls, right?” Stewart said following OTAs on Tuesday. “That’s the bottom line on why we drafted him. It’s not about people getting carries, or people getting touches, or getting touchdowns. It’s about what you what can contribute” to the team.

Stewart has always approached things with a team-first mentality, having spent the majority of his nine-year career splitting reps with DeAngelo Williams.

The Panthers still envision Stewart having a huge role in the offense after a solid season in which he ran for 824 yards and nine touchdowns in 13 games. That’s why they signed him to a one-year $8 million extension that will keep him under contract through the 2018 season.

The 5-foot-10, 240-pound Stewart is an entirely differently runner than the smaller McCaffrey.

Stewart is a power back who excels at breaking tackles, while McCaffrey is expected to bring more speed, quickness and versatility to the backfield as a pass receiver.

“It doesn’t change Jonathan’s role,” Panthers coach Ron Rivera said of the addition of McCaffrey. “We’re going to do what we do. (McCaffrey) is a young man who can come in an supplant some of those reps. He’s a dynamic player that can do some things Jonathan doesn’t do.”

For competitive reasons Rivera won’t say exactly how the Panthers will use McCaffrey in conjunction with Stewart, but does foresee them being on the field at the same time in certain formations.

“There are a lot of things that we’re going to look at and do differently and move around,” Rivera said. “I’m excited about it.”

McCaffrey hasn’t been able to attend OTAs because Stanford is on the quarter grading system, meaning he can’t practice until the school’s exams are complete.

However, the Panthers coaches have been keeping up with him on Skype on an almost daily basis and they continue to install plays.

“Jonathan will do the things he always does,” Rivera said. “He will play his role. Christian will have his role too and do his things accordingly.”

Stewart shrugged his shoulders and said he “no reaction’ when the team drafted a running back in the first round.

But he made it clear he has tremendous respect for the incoming rookie, saying McCaffrey has all of the attributes you want in an NFL player.

“Overall, he’s an all-around good football player,” Stewart said. “Tough out of the backfield, he’s fast and is a strong runner.”

Stewart said turning 30 in March isn’t weighing on his shoulders.

He has missed 21 games over the past five years with toe, foot and ankle problems, and hasn’t played a full 16-game season since 2011. But he said that limited playing time may be “a blessing in disguise,” since it has helped extend his career.

He said he feels great physically heading into the season.

“In this business age shouldn’t be a factor because it’s all about production,” Stewart said. “If you are producing it shouldn’t matter.”

Stewart believes the addition of McCaffrey and second-round draft pick Curtis Samuel from Ohio State will only make things more difficult on opposing coordinators, as well as open up more holes for him to run through.

“You get guys in here that can add value, like different speed, youth, it gives defenses something more to think about and at the end of the day that’s what you want,” Stewart said.