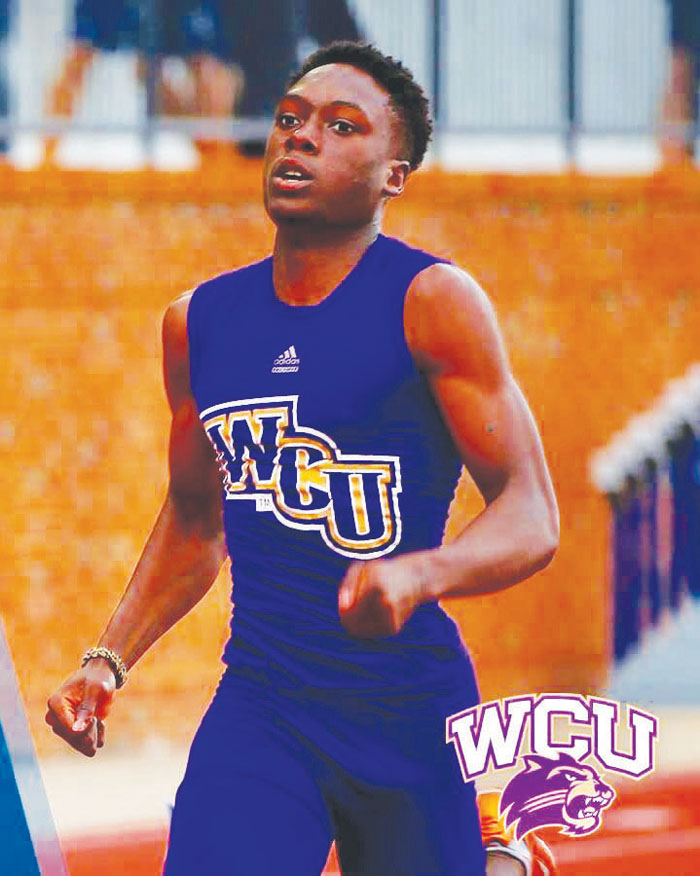 CULLOWHEE — The personal bests, the huge improvements in his times, the unexpected honors, it’s all just starting to sink in for Western Carolina University’s flying freshman Devaniel Dale.

“Now that I’m on summer break and looking back over my times, I  can’t believe how much I’ve improved,”  said Dale, the Southern Conference Freshman of the Year.

Dale was a solid sprinter for East Rowan High, a perennial member of the all-county team who challenged stars such as West Rowan’s J.T. Sanders, Carson’s Nick Cox and teammate Max Wall  in the 200 and 400 meters.

“I remember racing against the fast guys like Sanders and Cox and thinking that there was no way I could ever break 50 seconds in the 400 and getting under 23 seconds in the 200 just didn’t seem possible,” Dale said. “I never dreamed I could come this far in one year. I’ve made some huge jumps.”

In the Southern Conference Championships held in Birmingham, Ala., in mid-May, Dale was instrumental in Western Carolina edging host Samford for the title.  He placed second in the 200 and the 400. He registered personal bests in both events — 21.46 in the 200 and 47.95 in the 400.

“It all started with the preseason workouts before our indoor season started,” Dale said. “That was different from high school. We also lifted weights specifically for our specialties, and lifting made a difference for me. A key factor was great teammates. I practiced with our two fastest guys — Henry Keidy and Dakota Lamont. Practicing and training with them felt like a difficult race every day. My teammates impacted me a great deal. Those guys are so competitive, and they were loud when it came to cheering me on.”

“Mostly there was an increase in my confidence,” Dale said. “Coach Davis talked to me a lot about forgetting about my opponent’s PR and just competing my hardest.”

Dale’s support group also included Dale his father in Jamaica, who watched his son’s race videos and offered strategies. There also was Rick Roseman, a huge part of East Rowan track and field and cross country for many decades.

“A lot of Coach Roseman’s words have stayed with me in college,” Dale said. “I still practice them.”

Dale saw he was making major strides in the indoor season. Trying to sprint with Lamont, a regional qualifier, was making him quicker.

“It was a struggle trying to keep up with him at first, but I was getting a little better each week,” Dale said. “Next thing you know, I’m competing with him not only at practice but at the SoCon Outdoor Championships. In the 200 prelim, I ran the fastest time either of us ran this year.”

In those Southern Conference Outdoor Championships, Lamont, Dale and Kiedy finished 1-2-3 in the 400. That was the event that propelled the Catamounts into contention.

The conference title was still undecided going to the final event — the 4×400 relay — with Samford still within striking distance of the Catamounts.

Dale would run the second leg.

“I was drained from that 200 final and feeling pretty drowsy because there was a lightning delay that had us sitting around in our bus for 30 minutes,” Dale said. “But when Henry Keidy ran that first leg of the 4×400 and took the lead and handed me that baton, I got such an adrenaline rush. I’ve never felt stronger in my life and I brought the baton to Miles Greer with us still in front. We had the fastest time coming in and we were supposed to win that race, but I never assumed that we’d win until we won it. It was exciting to win the meet with it being so close at the end.”

In the days that followed, Dale drifted back to earth, but only temporarily.

As the highest-scoring freshman in the SoCon Championships, he would be named the league’s Freshman of the Year.

“I was home one afternoon and my one of my teammates, Nick Lawson, texted me to say, ‘I think you’re on SoCon Instagram, I think you may have gotten an award.'” Dale said. “I was curious about what award I would’ve been getting, so whenever I saw it I was so surprised. I just couldn’t stop smiling after that. That was a huge honor and I’ll never forget that great achievement.”

Dale plans to relax as much as possible this summer, as he’s been running for many months without giving his legs a break.

He’s doing very well in school. He said he’s not satisfied with the 3.1 GPA he posted this semester as an electrical and computer engineering major.

Now the sky appears to be the limit for a youngster who came to the USA from Jamaica when he was 12.  His mother ran track in Jamaica, a  Caribbean island that has produced some of the great sprinters, including Usain Bolt. Dale believes the lightning in his legs came from his mother, but it’s a gift that he developed to a whole new level in the past three months.