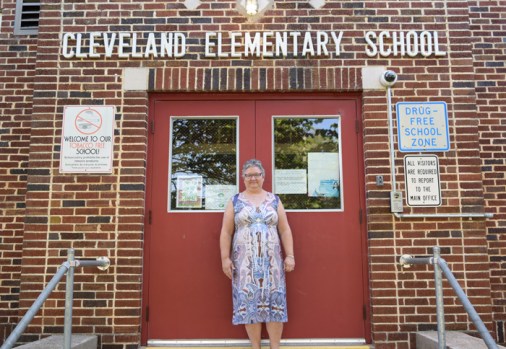 Rebecca Kepley-Lee will retire on July 1 after 19 years as the principal of Cleveland Elementary and 29 years at the school, total. Rebecca Rider/Salisbury Post 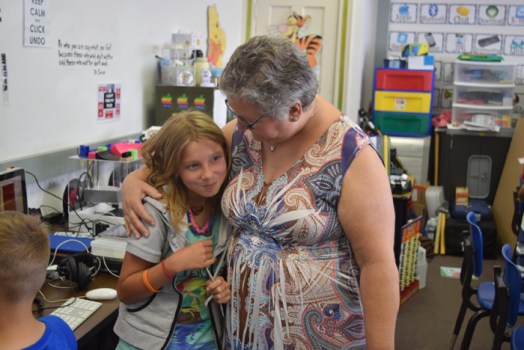 Rebecca Kepley-Lee hugs student Phoebe Carter. Kepley-Lee said her favorite thing about being an educator is interacting with students — be it receiving hugs or witnessing a light bulb moment when they finally grasp a concept. Rebecca Rider/Salisbury Post 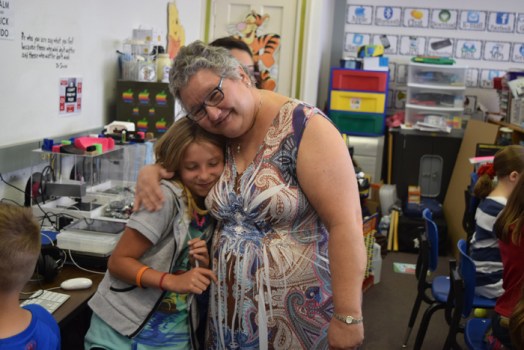 Rebecca Kepley-Lee hugs student Phoebe Carter. Kepley-Lee said her favorite thing about being an educator is interacting with students — be it receiving hugs or witnessing a light bulb moment when they finally grasp a concept. Rebecca Rider/Salisbury Post

CLEVELAND — Rebecca Kepley-Lee walks through the halls of Cleveland Elementary as if the school were her own home.

She knows the students by name, and they know her. As she checks in on teachers, they run up to give her hugs or hold out a hand for a high-five as they pass her in the hallway.

Kepley-Lee started working at Cleveland in 1988 as a second-and third-grade teacher. In just two weeks, she will retire.

“It was the hardest decision that I’ve ever made,” she said.

But Kepley-Lee has two parents who are growing older and running into health problems, and she knew if she didn’t devote her attention to them now she would regret it later.

“I just feel like it’s time to be a daughter and give them the help that they need,” she said.

Kepley-Lee is the kind of person who throws herself into an activity 100 percent. As an educator, she is committed all the way. Splitting her time between school and caring for her parents would have been a disservice to both.

When she told students about her upcoming retirement and the reason behind it, she got a range of reactions. One young girl in particular told her to “’just tell them you have a job.’”

Cleveland Elementary is a generational school, and its administrators weave themselves into the fabric of its story. It has a strong relationship with West Rowan High School and with Freightliner, which sits just a stone’s throw from the building.

She thinks that community and family-oriented atmosphere has become part of her legacy.

“We’re one big family here. All the children belong to everybody,” she said.

Over the years, she’s seen a lot of changes, from the way classrooms are structured — going from rows of desks to more open, collaborative spaces — to watching parent involvement plummet as the community was hit hard by the recession.

But it’s the kids that keep her coming back.

Kepley-Lee is a hugger. She loves giving them to kids, and she loves it when they come up and hug her around the middle, unprompted. And she loves when a student who has struggled with something all year finally has that light-bulb moment.

“That’s the love,” she said, “to know that you have helped make a difference. You are helping them mold their lives for the future.”

And it’s what she’ll miss once school is out for the summer.

“I always cry the last day of school. … I can’t imagine what the end of this year is going to be like,” she said.

Next year, Kristine Wolfe will take over at Cleveland. Wolfe, current principal of Woodleaf Elementary, will manage both schools until they merge into the new western elementary school.

Kepley-Lee said she doesn’t want to “step on (Wolfe’s) toes” but she would like to stay involved in the school and the community that she’s called her own for so many years — proctoring for tests or volunteering to help with reading.

“I’ve loved every minute of it,” she said.