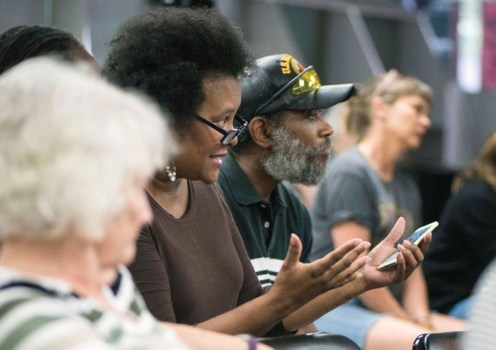 JON C. LAKEY / SALISBURY POST All Heggins asks the council members a question about an issue with the City Manager's job description. A meeting was held at the Mission House church on Statesville Blvd. in Salisbury on Tuesday evening by the group Justice In Salisbury to discuss and ask questions of the three members of the Salisbury City council that attended. Tuesday, May 30, 2017, in Salisbury, N.C. 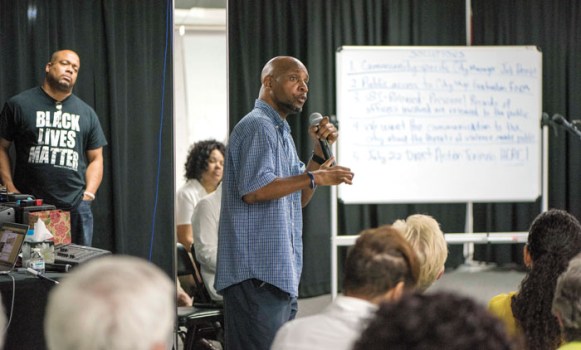 JON C. LAKEY / SALISBURY POST Alex Clark closed out the meeting with comments. A meeting was held at the Mission House church on Statesville Blvd. in Salisbury on Tuesday evening by the group Justice In Salisbury to discuss and ask questions of the three members of the Salisbury City council that attended. Tuesday, May 30, 2017, in Salisbury, N.C. 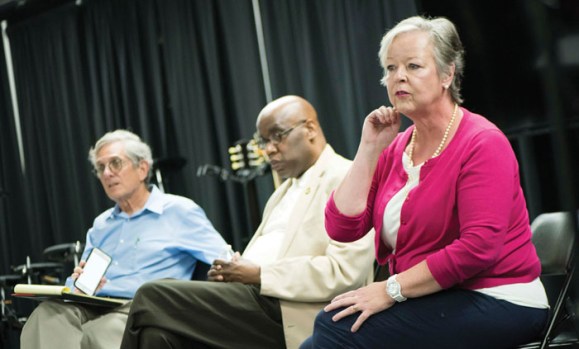 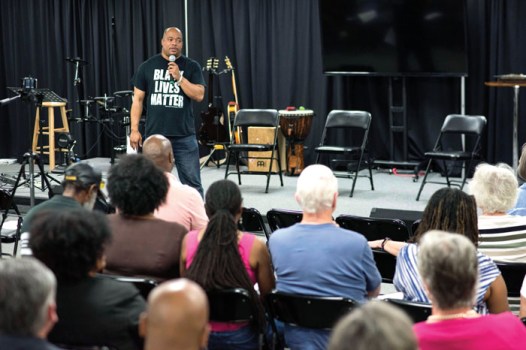 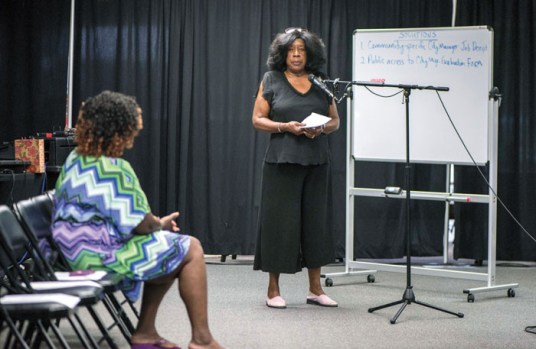 JON C. LAKEY / SALISBURY POST Deedee Wright takes a turn at the microphone. A meeting was held at the Mission House church on Statesville Blvd. in Salisbury on Tuesday evening by the group Justice In Salisbury to discuss and ask questions of the three members of the Salisbury City council that attended. Tuesday, May 30, 2017, in Salisbury, N.C.

At times, residents expressed frustrations about efforts — or lack thereof — of city staff to engage with the community. Others questioned whether city staff members respond appropriately to community concerns. By the end, the group of about 40 local residents, with some agreement from the three council members in attendance, created a list of five solutions.

Those include: creating a community-specific job description for City Manager Lane Bailey; allowing access to a blank copy of Bailey’s evaluation form; the release of personnel records of officers involved in Laurent’s death; release of any communication about threats of violence to the city; and that attendees gather July 22 for direct-action training.

The City Council members in attendance were Mayor Pro Tem Maggie Blackwell and Councilmen Kenny Hardin and David Post. At times, the council members agreed with or said they would consider the five solutions. At other times, they offered no opinion.

Addressing a community-specific job description for Bailey, for example, Blackwell said, “Maybe that’s something to look into.” All three seemed to agree on releasing a blank version of the evaluation form used for Bailey.

The meeting — organized by a new group called Justice in Salisbury — was a result of discussions between city staff and select residents last week and an ensuing letter to pastors and other local religious leaders. Mayor Karen Alexander wrote the letter to the religious leaders. It included a statement that the city had received information that “disruptive actions could possibly take place” depending on the outcome of the Laurent case.

City officials have said that District Attorney Brandy Cook has a State Bureau of Investigation report about Laurent’s death. A decision on police conduct is expected within the coming weeks, Alexander told the Salisbury Post on Saturday.

Organizers and attendees at Tuesday’s meeting said they were offended that city officials thought violence would erupt as a result of Cook’s decision about police conduct in Laurent’s death.

“I want to go back to the narrative that was created,” said Alex Clark. “Do you realize how detrimental a narrative that’s created by the mayor or whoever wrote the letter? For one, you’re telling me that you expect me to pick up a gun to shoot somebody, to hurt somebody that hasn’t done anything to me based on your skin tone. I need that to sink in for a minute.”

Laurent was killed by Salisbury police officers during the execution of a no-knock warrant in November. Such warrants don’t require law enforcement officers to announce their presence before entering a location.

Laurent reportedly fired first at officers, police said. An autopsy report found he had 10 gunshot wounds and no drugs or alcohol in his system.

As is protocol, Officer Karel Boehm, who police said fired back at Laurent, was placed on leave until an internal and SBI investigation were complete.

A significant part of Tuesday’s meeting involved audience members challenging the City Council members present about their thoughts on no-knock warrants. In February, the council received an opinion from the N.C. Attorney General’s Office stating that Salisbury does not have the authority to limit the warrants. But local attorney Todd Paris on Tuesday challenged that decision on Tuesday. Paris said an attorney general’s opinion is simply a legal statement that works for state government.

Post said there’s been three no-knock warrants used in Salisbury in the past three years. He said that’s much lower than the national average.

After Tuesday’s meeting, council members varied about their opinions on no-knock warrants. Asked for his position if faced with a vote on the matter, Hardin said he would be willing to vote to ban the warrants. Blackwell said she would need to talk with state legislators first. Post, an attorney, gave a more detailed answer.

A better solution to no-knock warrants would be a lawsuit brought by local residents, Post said.

“Why doesn’t somebody here sue the city?” Post asked. “Go look at all the important cases. It’s not the city of Topeka against. It’s against the city. Why don’t the citizens sue us? I’m serious. … You don’t have any of the great Bill of Rights cases without a citizen because they are individual rights.”

For a large part at the start of the meeting, Hardin answered questions posed by Carolyn Logan. At one point, Hardin addressed the idea that violence could erupt after a decision about the Laurent case.

“If you really understand the black community or the black culture across the city, it’s almost an expectation that we’re not going to get justice anyway,” Hardin said. “So nobody is going to be that upset.”

Hardin said it is a “dangerous thing to do” for Salisbury city staff to have meetings with selected local people in advance of a decision about the Laurent case.

At another point, Hardin recounted a conversation he had with a city staffer about gun violence.

Discussions about the job description of Bailey took up another significant portion of Tuesday’s meeting. Both during the meeting and in a letter sent to city staff, members of the Justice in Salisbury group advocated for a job description that’s specific to the needs of Salisbury.

Initially, Post responded to questions about the job description by saying state law contains a general description of a city manager’s duties.

Resident Al Heggins later fired back that “general duties do not fit every jurisdiction.”

As the meeting neared its second hour, Thomasina Paige stood up and questioned the effectiveness of ongoing discussion.

“All we’re doing is listening to everybody’s opinion of all these various things that are going on,” Paige said. “We’ve been here about two hours. What are we going to do with this group, and what do we do next? Wait for the papers? Wait for the report? I don’t see a plan for action.”

Meeting organizers would later jot down the five solutions on a white board near the front of the room.

Alisha Byrd, who serves on the Rowan-Salisbury Board of Education, questioned what type of message the Salisbury community is sending to schoolchildren. Byrd said Salisbury needs to “lead by example.”

Renee MacNutt encouraged the city to “make the news.”

Although city staff did not attend Tuesday’s meeting, Salisbury government will have its own meeting at 3 p.m. today at Hood Theological Seminary.