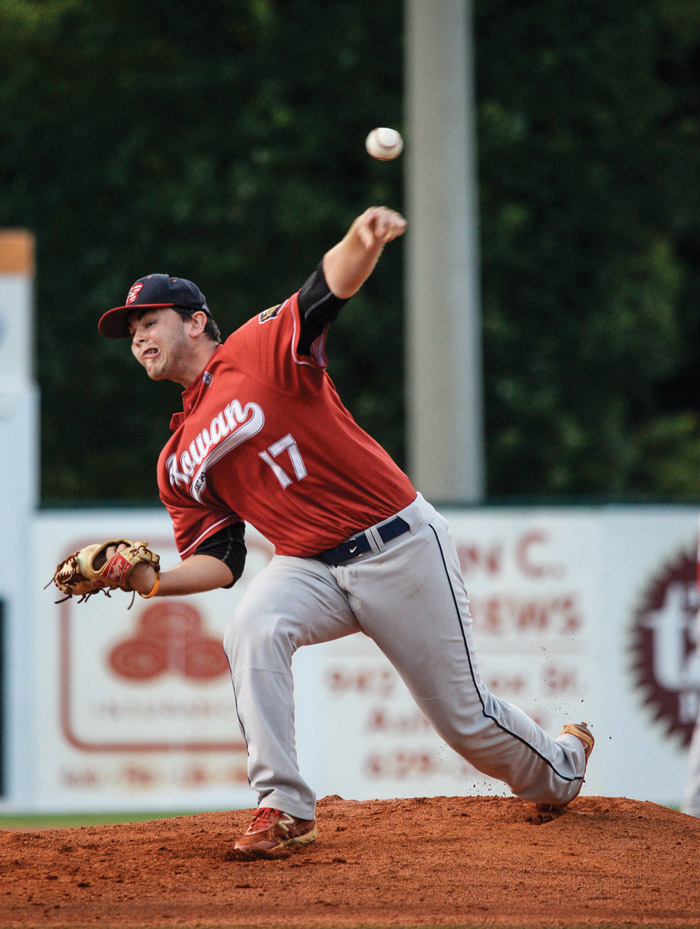 White (1-0) pitched five scoreless innings and allowed three hits. He was sharp and efficient. He needed only 55 pitches to get 15 outs.

“(Pitching coach) Russ Weiker got me driving more off by back side tonight,” White said. “That adjustment helped me locate the ball better.”

White, who just finished his freshman year at Belmont Abbey, was 7-1 for the Rowan Legion squad on its run to the World Series last summer, but he’s a little rusty.

“I redshirted at Belmont Abbey, so I’d thrown in some intra-squad games, but I really hadn’t pitched in a live game in a couple of months until I started our first game of this season  at Kannapolis,” White explained.

White didn’t make it out  of the first inning in his debut. Kannapolis scored six quick runs and Rowan had to claw back to prevail, 16-14, in a four-hour game.

“It wasn’t like they were hitting doubles in the gap, but everything they got a bat on found a hole,” White said.

It was a lot different on Wednesday. White, a 2016 North Rowan graduate, cruised along, and Rowan (4-0) gave him early run support.

“I was getting ahead of everyone, and I was able to throw first-pitch strikes with curveballs and changeups as well as fastballs,” White said. “I was really happy with the outing. I felt like I got back on track tonight. I got back to where I was last summer.”

Henderson Lentz,  who pitched out of a jam in the sixth, Hayden Setzer and Brett Graham followed White to the mound and maintained the shutout.

Chandler Blackwelder and Brandon Walton also had good nights at the plate. Rowan had nine hits and played errorless defense. Eastern Randolph had eight hits and made two errors.

Rowan plays at home tonight against Randolph County at 7 p.m.

Rowan will play at Mooresville on Friday.

That game will be played at the improved facility at Mooresville High, which includes new bleachers behind home plate, artificial turf and more space for lawn chairs.