Stories of the fallen: Families pay tribute on Memorial Day 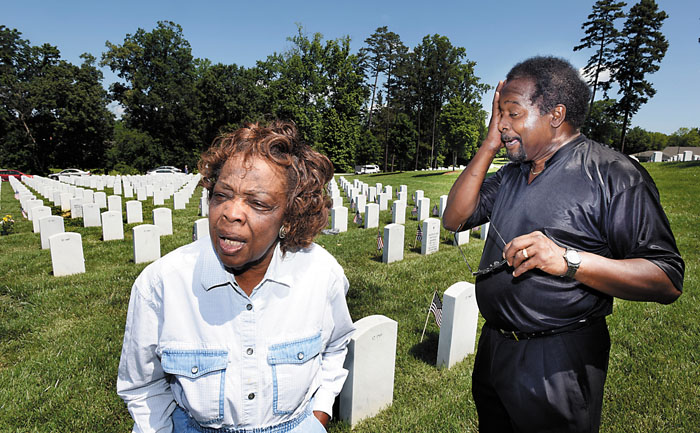 Creola Torain and her son Ron Torain become emotional talking about Christopher Daryl Torain who was her son and Ron's brother. He served in the Air Force who died from a heart attack. Wayne Hinshaw, for the Salisbury Post

Family members gathered for the Memorial Day service at the Salisbury National Cemetery Annex shared stories of remembrance, heartache and love about the fallen soldiers.

“His name was Christopher Daryl Torain, and he was in the Air Force. And my son (Ron) and I were just talking about what a good person he was. Just good-hearted. His wife talked about what a good guy he was and you wouldn’t want no better husband. And he had his faults but, when everything was good, it was just really good. And he was only 50 years old (when he died). And he looked like he might be 35. He looked young. And when he was in Houston, he was right near the VA (hospital) and he went and got his medicine and all that. But then, when he moved up here, he just didn’t take care of himself.”

“He died from a heart attack. And what’s terrible about it is, especially men … we could be sick and we’re just going to tough it out. ‘Oh no, I’m not going to the doctor.’ He had a heart attack. If he had gone to any emergency room the day before, they would have took him in the hospital right then. But, us guys, we’re macho, especially military. So we don’t go to the doctor, we don’t get health insurance and we definitely don’t get life insurance because we’re going to live forever. He was a good guy. He’d sing in the church. I couldn’t believe how many lives he had affected until I went to his funeral. He had just moved to the town.”

— Creola Torain and her son, Ron Torain, talking about her son and his brother, Christopher Daryl Torain

“(My husband) was a very avid gardener, and he loved baseball – the Atlanta Braves – and NASCAR, things like that. We were married for 65 years. It was 65 years, four days after he died. And he died three weeks before his 84th birthday. We were 18 when we got married. He was in the Navy when I married him. My sister was married to his brother; that’s how I met him.”

“He died last year, (but) he served in Korea during the conflict. He was there for two tours. We’re from Lewisville, about 45 minutes (away). We come here about once a month. And we always bring flowers; (my mother) makes sure of that. In the early spring, she always brings a spring bouquet up here. And, of course, we bring decorations for Thanksgiving and Christmas, stuff like that.”

— Delores Shew and her son, Randy Shew, remembering her husband and his father, Russell Shew

“I don’t know the details, but I know he spent almost 10 years in service, in different places. He went to Germany, he was in Colorado. He was in the Airborne, in the Army. He first went into Job Corps, and after then he went into the service. And he was married but he had no children, so he loved his nieces and nephews. And he loved his sisters dearly. (When we were growing up), he was great. He was a jokester. We had a nickname (for him); we called him ‘Joe Cool.’ And that’s what his friends would call him. He graduated while he was in service, but he attended Kingville High School in Albemarle. We’re from Albemarle. And the people in the community loved him. He would visit the elderly. He was just a lovable person. We’re proud of him, we love him, and we miss him dearly.”