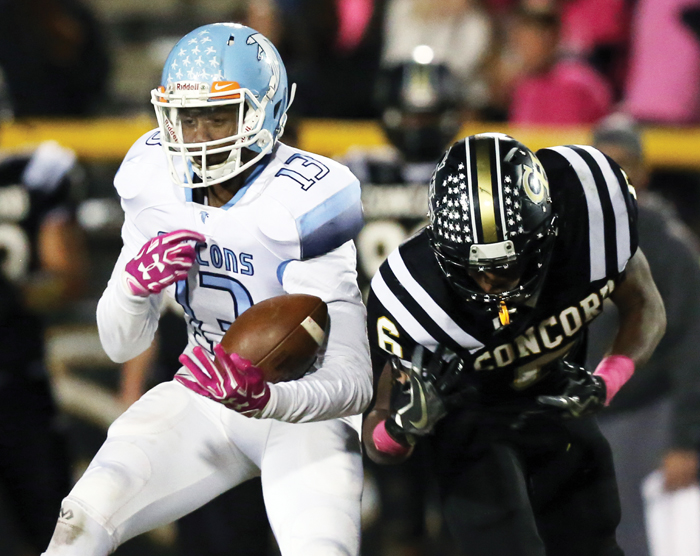 James Sipes/for the Salisbury Post ... West Rowan defensive back Kam Caldwell (13) intercepts a Concord pass that was intended for the Spiders’ Antonio Campbell (6), during a game last Oct. 21. Caldwell has announced that he will continue his education and football career at Louisburg College.

MOUNT ULLA — It actually happens quite a bit. A college coach is in the stands to see one guy, but then he spots an undiscovered diamond in the rough.

That’s how it occurred for West Rowan senior Kameron Caldwell, who signed on Tuesday with Louisburg College.

A Louisburg coach was in Mount Ulla to take a closer look at West defensive end Tyler Wheeler on Sept. 30 when the Falcons hosted Carson. The coach really liked Wheeler — Louisburg eventually signed him— but he also was impressed by Caldwell, a fast, hard-hitting safety he’d never heard of.

“They came to see Tyler, but they called me after the game and said they were going to be start following me, too,” Caldwell said. “They told me to keep them updated and to keep sending them my highlights.”

There was a reason Louisburg hadn’t heard of Caldwell. That was his first game playing safety. He’d always been on the other side of the ball as a receiver.

Caldwell caught a lot of touchdown passes for West as a sophomore jayvee in the fall of 2014.

As a varsity junior in 2015, he caught 17 passes for 136 yards, including a fourth-quarter touchdown in a victory at Carson.

Division I receiver Kortez Weeks, an Elon signee, was West’s primary target the last three seasons, so Caldwell wasn’t getting a lot of balls thrown in his direction. In the first five games of his senior season, he’d caught just six passes for 45 yards, but that’s when everything changed. Starting Safety Malcolm Ingram had injured a knee, and West didn’t have depth in the secondary.

“Coach (Joe) Nixon said at practice we were going to have safety tryouts,” Caldwell said. “I just spoke up and said, ‘Hey, I’ve got this. I can do it. I can play safety.'”

“He’s a physical kid,” West head coach Joe Nixon said. “He’s long and athletic, and he’s got the confidence that he can do anything. There’s a lot of upside there. He only played a half-season of defense, but that half-season was enough to give him a chance to play college football.”

Caldwell improved every game in his new role.

“I was nervous that I’d mess up at first, but my teammates had my back,” Caldwell said. “They told me if I missed a tackle, not to worry, that they’d make it.”

When Ingram returned to the lineup, Caldwell had played so well that the Falcons kept him on defense.

In the game at Concord on Oct. 21, his fourth game on defense, Caldwell jumped a short pass route, spun away from the receiver and hauled the interception 52 yards for a touchdown.

“I actually was supposed to drop back in coverage on that play, but they’d run that same play three times in a row,” Caldwell said. “I just saw a chance to make a play.”

Caldwell’s most memorable play of 2016 came on the final snap of the first half in the first-round 3A playoff game against Morganton Freedom. Freedom attempted a field goal with disastrous results. Cornerback Paris Hillie blocked the kick and the ball caromed straight to Caldwell. He sped 85 untouched yards down the West sideline.

“That ball fell right in my hands,” said Caldwell, smiling at the memory. “And that was probably the fastest I’ve ever run in my life.”

“We were pretty flat that night and not playing all that well,” Nixon said. “That blocked field goal and return gave us that extra push we needed.”

West has been 10-4 in both of Caldwell’s varsity seasons.

Louisburg also has made a habit of winning. The Hurricanes were 9-0 last fall against a collection of  prep schools, jayvee programs and four-year colleges. They were the only one of the 33 college teams in North Carolina to go undefeated.

The school is located east of the Raleigh/Durham area and is a little over two hours  from Salisbury. Playing for Louisburg will give Caldwell a chance to prove he can handle a four-year college program academically and physically.

In a half-season of defense for West, Caldwell scored two touchdowns and made 32 tackles. He’s signing late, but he has the physical tools and the family support he needs to be successful.

“Sometimes I wish I’d played defense my whole career because I really believe I could have made a name for myself,” Caldwell said. “But all that’s important now is being a Louisburg Hurricane. I’m excited to be a Hurricane.”