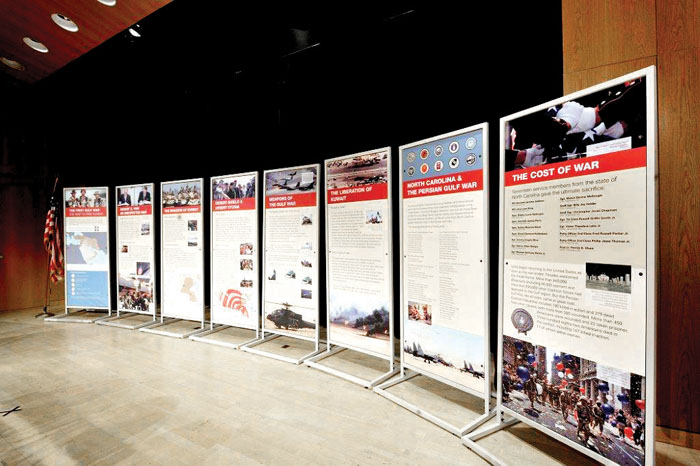 A traveling exhibit on Desert Storm will be at the Price of Freedom Museum in China Grove next weekend.

Michael Chapman said he hasn’t had a brother in 25 years.

That’s because on Feb. 21, 1991, his youngest brother, Chris, was killed during Operation Desert Storm.

“He’d gone (from Saudi Arabia) to Iraq to rescue a lieutenant,” Chapman said during a phone interview Monday. “He was a crew chief, meaning he was responsible for keeping the helicopter flying.”

Chris’ crew did manage to get the injured lieutenant and load him onto the helicopter. But after a long flight back and two unsuccessful landing attempts, the unthinkable happened.

“As they were turning, one of the wings clipped a sand dune,” he said. “It killed all seven people on board, instantly.”

Michael Chapman, who grew up in Charlotte and now lives in Salisbury, said things have not been the same since Chris passed away.

But in the years since his brother’s death, Chapman has been able to find solace in a project – a project that he hopes will help other families as well.

Chapman said that back in the mid-1990s, a group in Charlotte wanted to do something to honor the 18 North Carolinians who had died during Operation Desert Storm.

“And they put me in charge, for some reason,” he said.

From there, the group decided to reach out to both the Saudi Arabian and Kuwaiti governments to see if either would be willing to collaborate.

“And Saudi Arabia never got back to us, but Kuwait did,” he said.

Because of that, the state of North Carolina soon had $100,000 donated by the Kuwaiti government in order to build a Desert Storm monument.

Unfortunately, because of a series of bureaucratic hoops, it took nearly two decades for that money to be used.

“It’s stayed in the general fund since 1997,” he said. “We had designs approved and everything, but we couldn’t get it through.”

But now, after years of work, the monument – which actually became a traveling exhibit instead of a permanent fixture – is finished.

“This is far from what we’d planned, but it’s something,” he said. “And I really wanted it to come to Salisbury.”

The exhibit will come close – it will be displayed at the Price of Freedom Museum in China Grove from 9 a.m. to 2 p.m. Saturday and from 2 p.m. to 6 p.m. Sunday.

Chapman will be there for the entire time that the exhibit is open. You’ll find him at a table introducing himself to visitors and answering questions about how the exhibit came to be.

Memorial Day: When the fast lane becomes a slow…