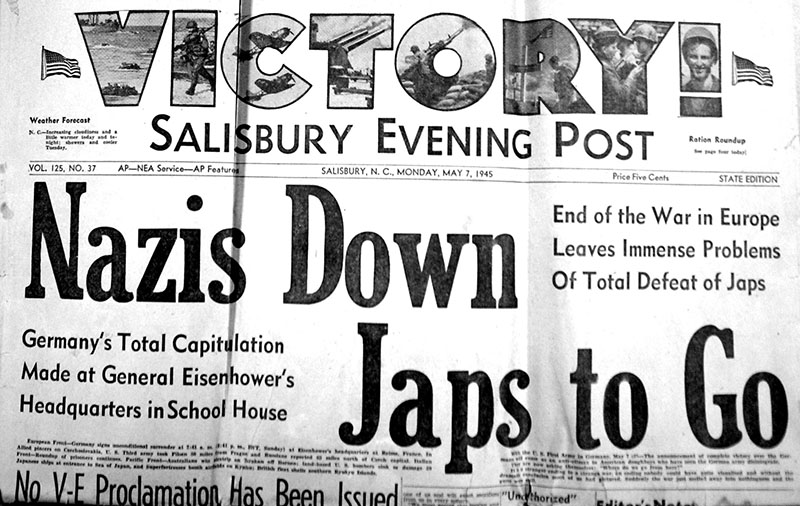 This ‘Victory’ edition of the Salisbury Evening Post on May 7, 1945 (a Monday) announces the end of the war in Europe. At 8:41 p.m. in Europe the evening before, Germany signed its unconditional surrender at Gen. Dwight D. Eisenhower’s headquarters in Reims, France. Although the victory in Europe was incredible news, the United States still faced fighting in the Pacific against the Japanese before World War II came to an end. Ralph Swinson, a veteran who lives in the Bostian Heights area of Rowan County, bought several old newspapers at an auction on Lee and Cemetery streets a couple of years ago, and this newspaper was among them. Elsewhere on this particular front page, a headline read, ‘Salisbury Is Calm As News Of Nazi Surrender Arrives.’ Here’s the opening paragraph of that story: ‘Salisbury greeted the long-awaited news of Germany’s capitulation today calmly. There were no riotous celebrations such as were held in other cities of the nation. Most of the ‘celebration’ will come tonight at 8 o’clock when the churches open their doors for their congregations to come and offer prayers of thanks for the ending of the holocaust in Europe.’